Seattle - Happy Friday!  Highs only hitting 46 at the airport today. Normal for this time of year is 50. 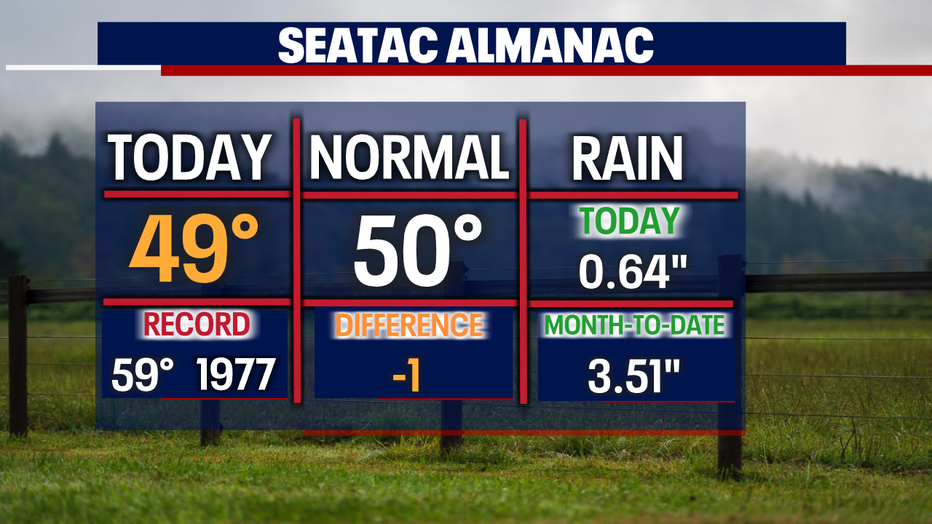 Overnight we dry out and cool off to below average for most around the Sound.  We expect temps to dip into the mid to upper 30s. 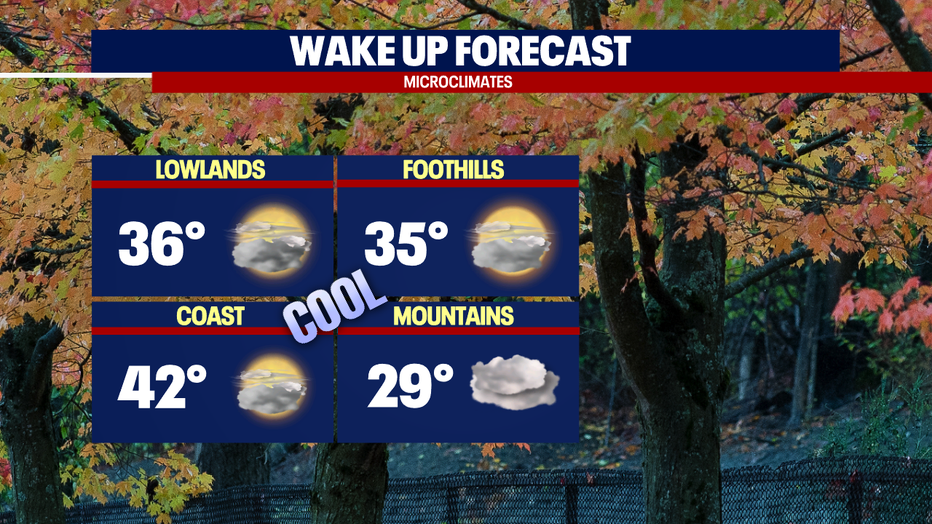 Showers will return Saturday, but not until later in the day.  If you plan to head over to Pullman for the big Apple Cup rivalry leave early in the day when the roads are clearer.

By 4pm rain starts to fall over the coast and North Sound with snow picking up over the Cascades. 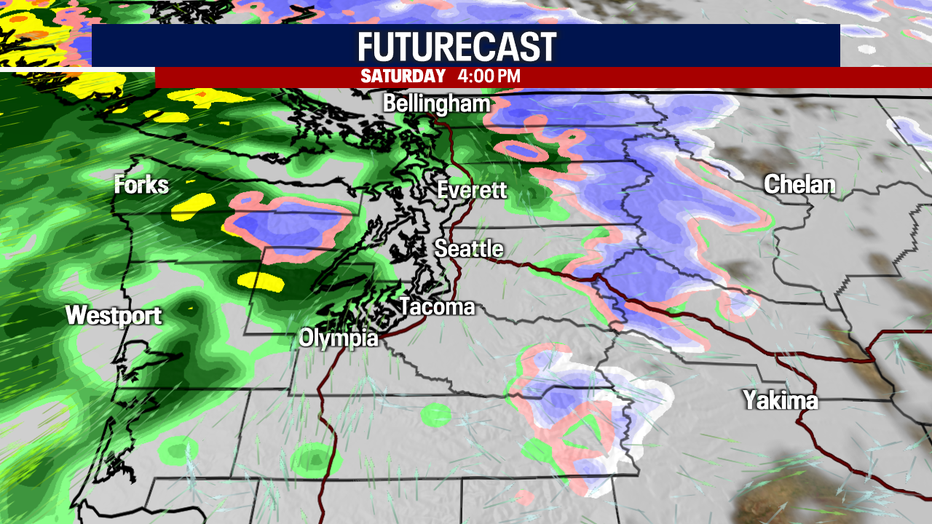 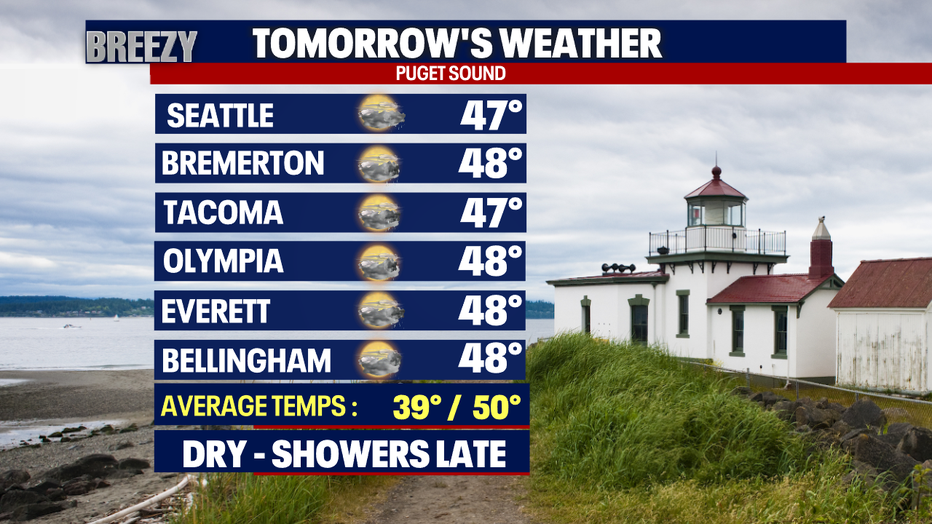 If college football has you in Pullman this weekend bundle up for sure!  Temps for the 7:30pm kick off sit near freezing under mostly cloudy skies.  And that's not the coldest kick off at Martin Field…remember 2014 when 19 was the game-time temp!!! 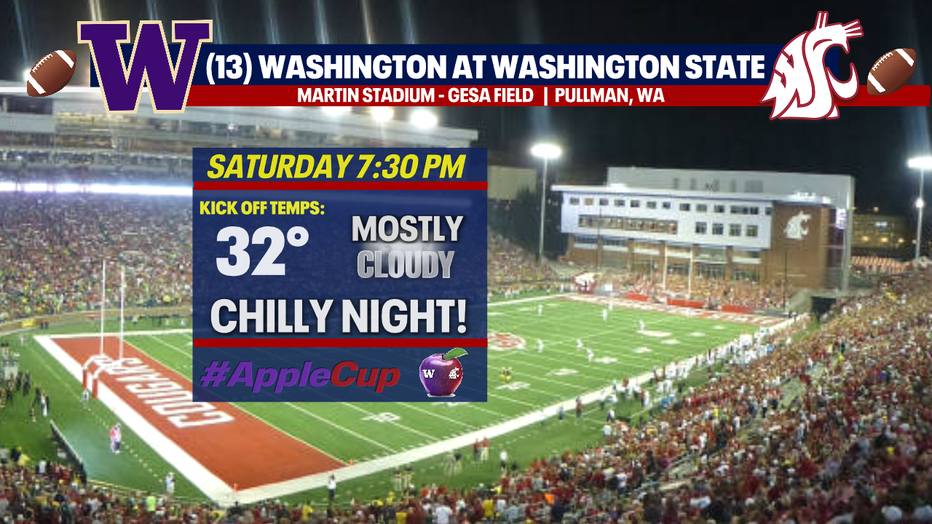 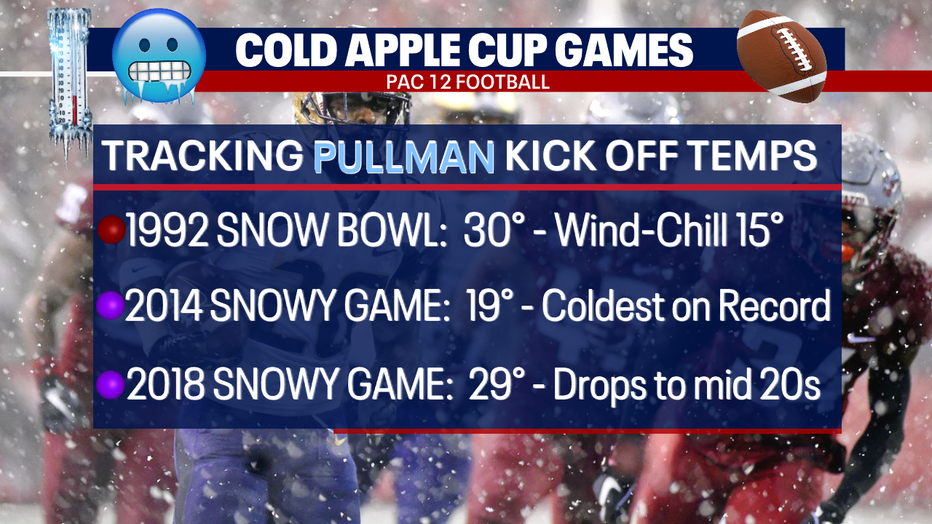 Rain continues to fall from the Coast to the Cascades late Saturday night, expect in areas in the rain shadow of Puget Sound.  Everett south to Tacoma will see fewer showers. 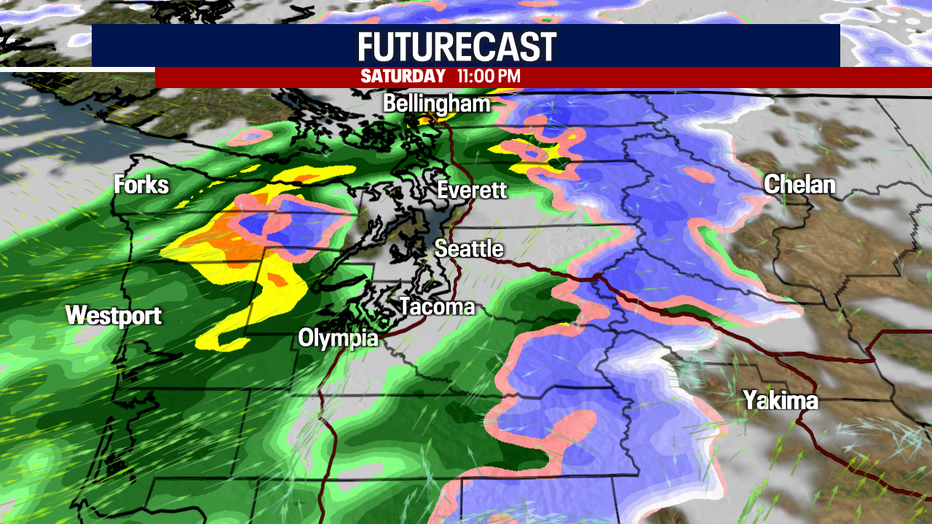 With a couple of systems riding through the region a "Winter Storm Watch" is in place above 1,500' over the Central and South Cascades and jumps to 2,500' for the northern mountains.  This weather alert will start Saturday evening lasting through early Monday morning.

We expect anywhere from 10-20" to fall in this time period.  The highest snow totals are to the north over Baker with nearly two feet with just over a foot for the Central and South Cascades.

Winds also could get gusty at times up to 40 mph near Baker. These conditions will make pass travel difficult.  Know the roads before you go! 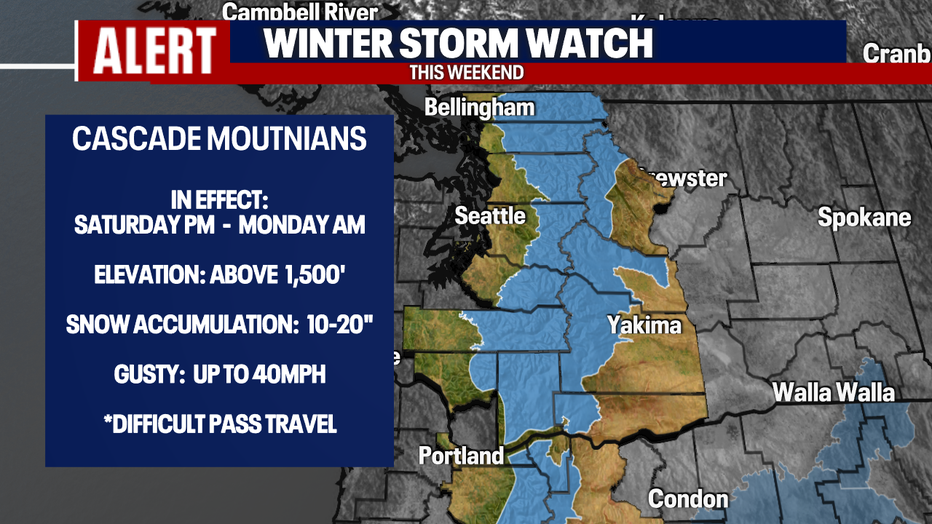 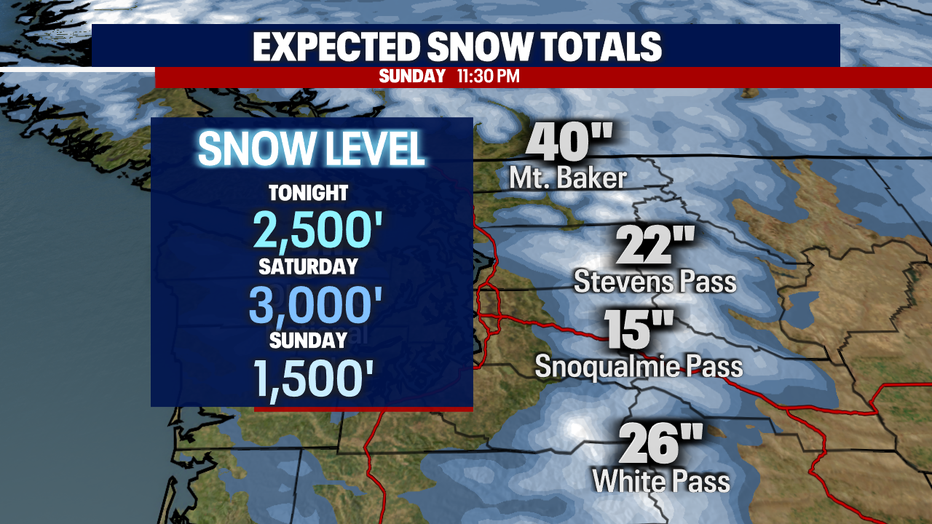 Look for rain to taper off overnight into Sunday turning to just a few isolated spotty showers across Western WA throughout the day.  The mountains will continue to see snow fall into early Monday morning. 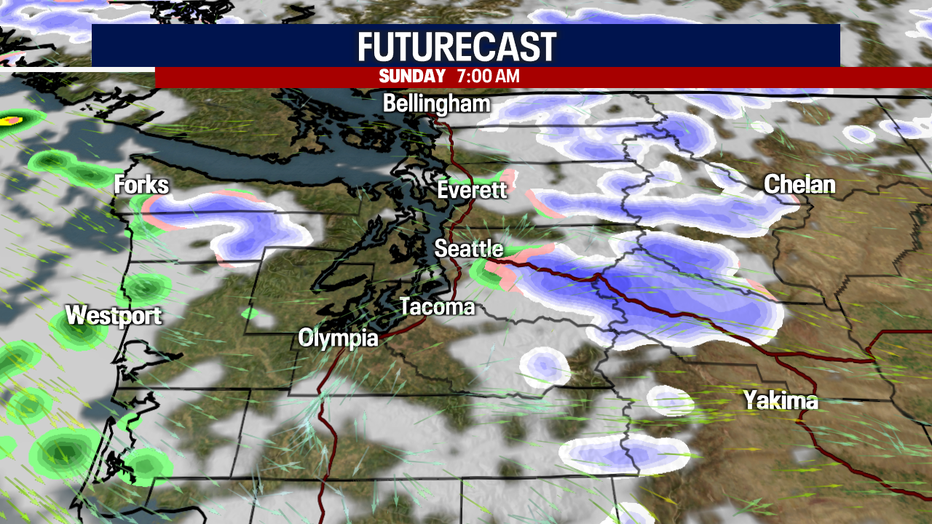 By 6am Monday snow over the mountains start to wrap up, but a few pockets of showers will push over the Northern Sound.

With cold lows in place, we expect a quick burst of a wintry mix over the area before drying out.  Highs Monday only warm to near 40. 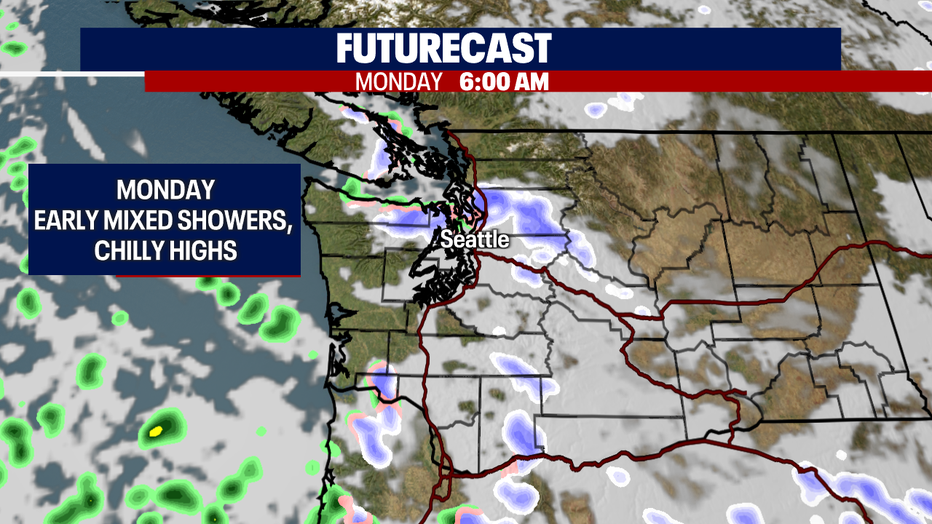 Tuesday - Friday next week looks cold…just how cold?  We'll, models aren't quite agreeing yet on how low we'll go, but for now we're forecasting well below normal highs. Look for temps in the mid to upper 30s with overnights in the 20s to near 30.

Snow levels will continue to drop as well giving us a shot at lowland snow.  The best chance for this to happen is late Tuesday into Wednesday.  Stay tuned! 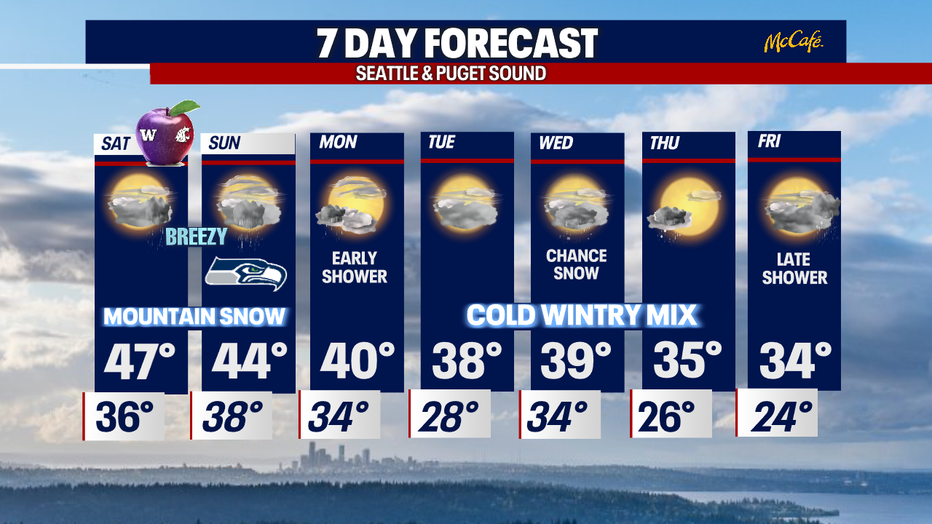 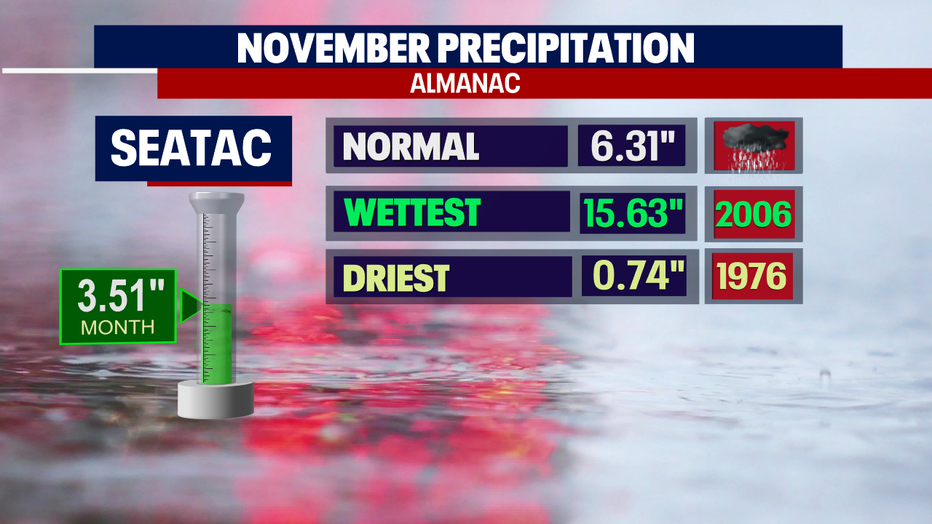