PORT ANGELES, Wash. -- The city of Port Angeles declared a state of emergency due to severe wind conditions Friday night.

Power was out for much of the city after wind gusts sent canopies flying and knocked fences to the ground.

Power was out "countywide" in the afternoon, according to Clallam County PUD. Officials said the Port Angeles Police Department was dealing with a high volume of calls for service since early morning.

An emergency operations center was opened in the city. Two of Bonneville's transmission lines feeding the town were damaged by winds, officials said.

The Red Cross opened an evacuation shelter at 8:30 p.m. for residents impacted by power outages. The shelter was located at the Vern Burton Community Center at 308 E. 4th Street.

More high winds are expected along the coast and inland Western Washington throughout Friday evening.

Wind on the coast

Wind on the coast 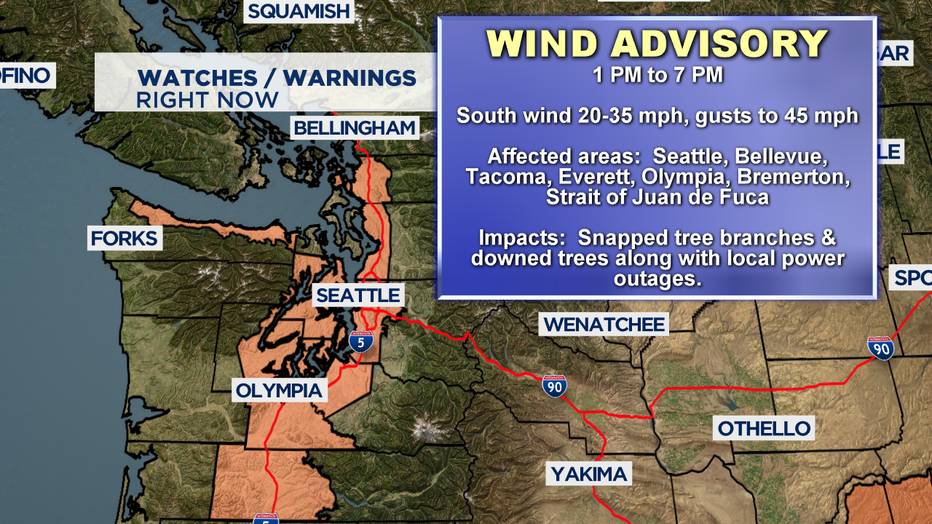 *FLOOD WARNING: Olympic Peninsula Region, mainly the Skokomish River near Potlatch affecting Mason County.  Moderate flooding expected through Saturday.  Flood waters will be deep and run fairly quick inundating some residential areas, many roads, and much of the farm land in the Skokomish Valley. Roads to keep an eye on are Skokomish Valley road, Bourgault Road West, Purdy Cutoff Road, and Highway 106.

TODAY: Dry morning inland with rain pushing in by midday.  Windy at times too.  Winds out of the south 9 -19 mph increasing to 21 to 31 mph in the afternoon with gusts as high as 44 mph. Highs near 52.

SATURDAY: Mostly cloudy and mainly dry.  A transition day between weather systems.  A chance of rain returns late in the day/evening hours. High near 48.

MONDAY: Cloudy, wet and breezy. Highs in the low 50s.

TUESDAY: Cloudy with heavy rain at times. High near 54.