seattle - Skies cleared after another round of morning fog for a gorgeous afternoon. We did very well temp-wise too! SeaTac landing at 73 with Kelso coming at 77.  There's just something about Autumn if the Pacific Northwest isn't there!  Cool crisp air with beautiful sunsets (when we can see them) leaving us feeling like it won't be so bad when the rain comes.  Well, the rain is on the way so soak up the sunshine while you can folks.

Here's how we did today by the numbers: 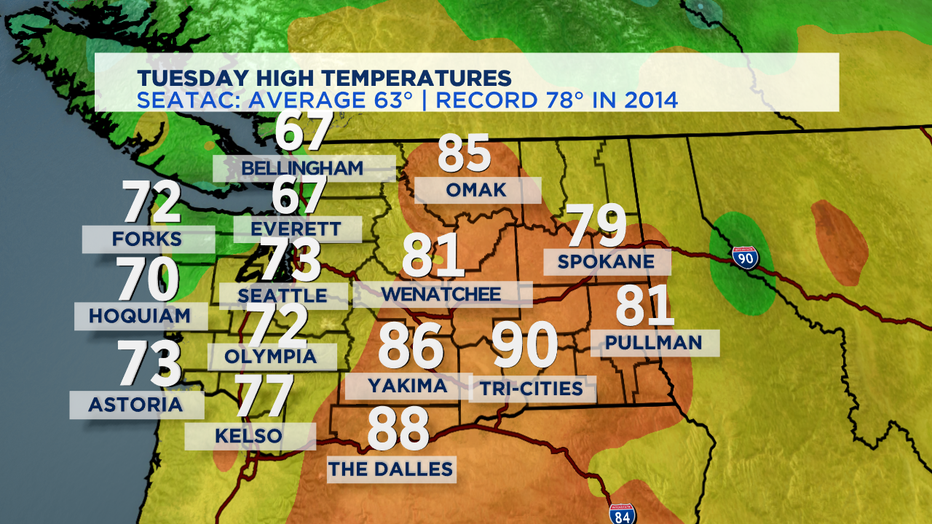 Tomorrow more fog as we wake up.  Some spots will see visibility drop to less than half a mile. Remember to slow down and take your time on the roads.  Wear reflective gear if you are biking, jogging. or walking too.  Once the fog lifts look for partly cloudy skies with highs slightly cooler than Tuesday, landing in the upper 60s which is still above the norm. 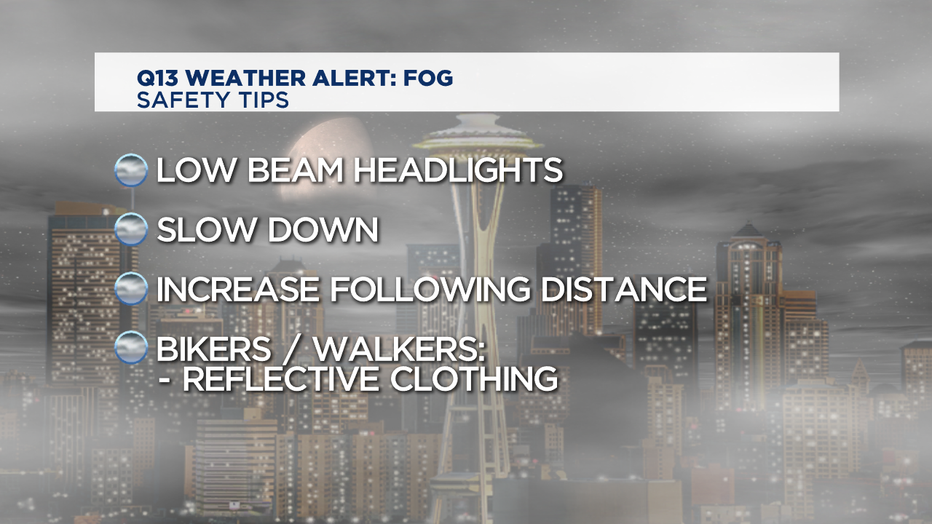 Wednesday evening on the pitch will be very pleasant for a match. Our Sounders FC host Real Salt Lake. We expect a dry night with temps in the mid 60s for the Rave Green.  Kick off set for 7pm on JOEtv.  #GoSounders 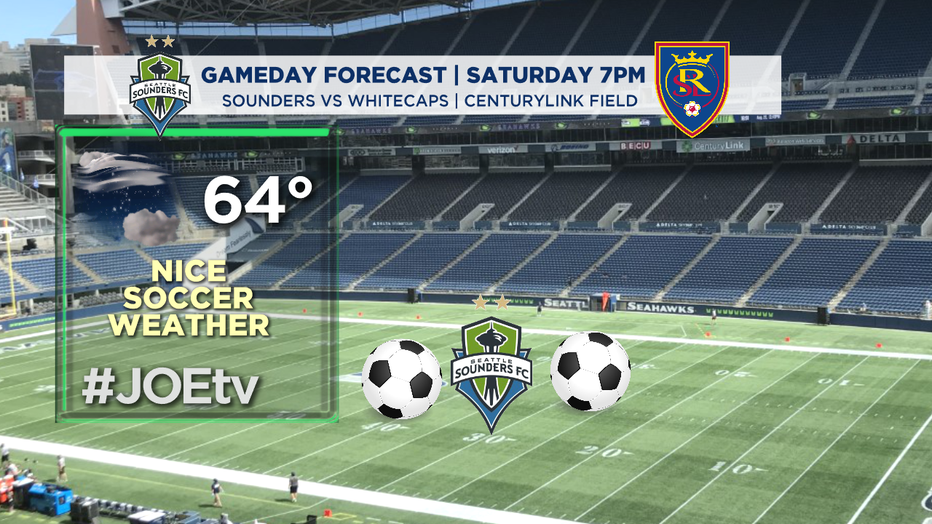 Okay, now to the change in our coming in our forecast. The ridge that's been holding off our fall storms is going to break down and that means we'll start to introduce more cloud cover and open the door for a few storms to push through and even some mountain snow along the Cascade Ridge.  And by the way, normal rainfall for the month of October is 3.48".

So, here is the break down for the rest of the week. Thursday clouds will increase, mainly dry, but there is a chance of a few sprinkles as a trough drops down from the Gulf of Alaska.  As the trough splits the North Sound and some of the Cascades will see light showers.  Highs will cool into the mid 60s. 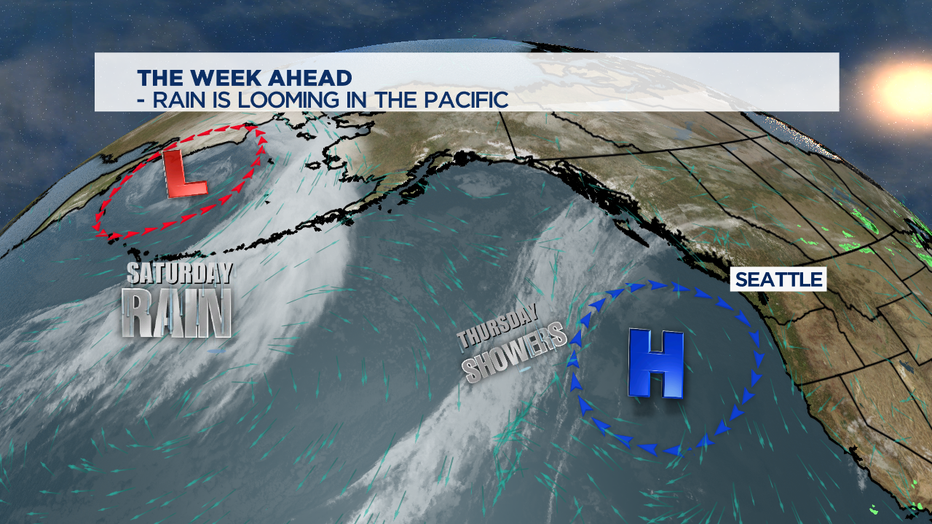 A more organized system is waiting for us in the Pacific. Although most of Friday will be dry, heavy rain gets going just after dinner.  We expect widespread showers with some gusty wind possible at the coast, less windy inland, but still breezy. Highs land in the mid 60s.

Rain will continue to be the theme Saturday too, and we can't rule out the chance of a few thunderstorms popping up as well.  Temperatures will cool even more, dropping into the upper 50s to low 60s.  Heavy rain will slow down and turn to just showers by Saturday night.

Sunday will start off with a few lingering showers, but by lunchtime we should dry out for a brief break. Highs will sit near 60, below the seasonal norm.

So, what does it look like for Sunday night football from CenturyLink Field?  Seahawks kick off at 5:20pm against the Vikings and just as the ball starts to fly, we'll see another round of showers getting ready to drop.  By just after kick off most of the area will deal with rain.  This might be a game that you're happy to watch from home. Highs are cool in the upper 50s to near 60. 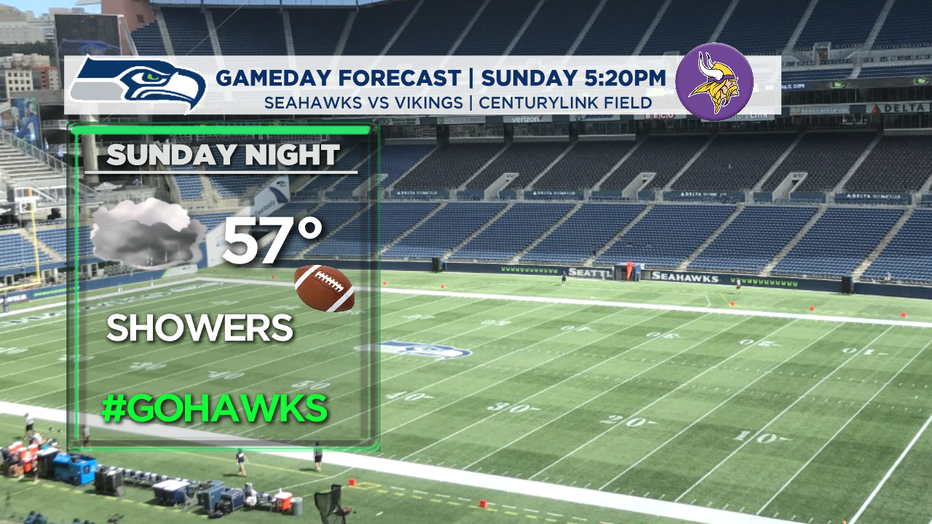 The lowlands will see rain totals around 2-3" with even more in the mountains... upwards of 4-6" in the higher elevations. And again, some of the mountain peaks could see a couple of inches of snow!

More rain is on tap for the holiday as we start the work week. 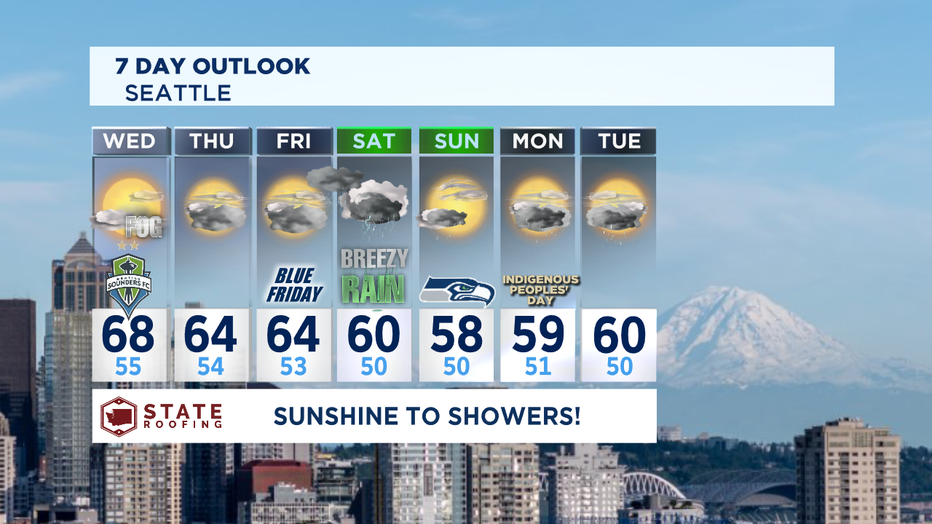