SEATTLE - Well, I guess it still counts as a "thunderstorm"?

As a weak disturbance passed through Western Washington early Wednesday morning, those around Seattle might have heard a rumble of thunder.

Data from Vaisala shows there was just one solitary lightning strike detected across the region -- a strike that struck the ground somewhere in north Seattle around Shoreline, or perhaps Mountlake Terrace

It was truly an "A-ha" moment: A one hit wonder.

It's a great illustration of the challenges thunderstorms face along the Pacific Coast. While storms in the Midwest can have dozens of strikes in minutes -- the Empire State Building itself once got hit by lightning eight times in 24 minutes -- thunderstorms find they just don’t have The Knack to find a favorable environment for development in this region.

Baby, that's cold! Water temperatures remain in the 50s through the year, providing a vast moderating effect on the incoming weather.

Thunderstorms thrive in environments where there are large temperature changes with height. If much cooler air is moving in or sitting aloft, warmer air parcels rising from the ground can climb higher into the atmosphere, making for taller, stronger storms that graduate into thunderstorms.

In the Midwest and East Coast, you have battles from cooler continental Canadian air mixing with the warm Gulf of Mexico that can make for strong cold fronts. Or on hot afternoons when you're Walking on Sunshine and the atmosphere is moist enough, it can trigger spontaneous thunderstorm development.

In Florida, which is the lightning capital of the United States, daily battles between the relatively cooler sea breezes and warm land masses mixed with an ample supply of tropical moisture and heat make thunderstorms a regular occurrence. Parts of South Florida average well over 100 days a year with a thunderstorm reported.

But along the Pacific Ocean, the cool waters keep temperature changes minimal, making an unfavorable environment for thunderstorm development. Much of the region west of the Cascades and Sierra Nevada mountain range average 9 days or less per year of reported lightning. How Bizarre!

And even when thunderstorms do form, it's usually due to borderline atmospheric conditions leaving them relatively weak with small hail, occasional lightning and a passing drenching rain shower, or sometimes even with No Rain at all.

(Though, even weak thunderstorms can be dangerous. Lightning, whether it's one strike or 100 strikes in a storm, can still be deadly and/or damaging.)

This chart, courtesy of Iowa State University, illustrates the dearth of major lightning along the Pacific Coast by showing the number of severe thunderstorm warnings issued by each National Weather Service office since 2015: 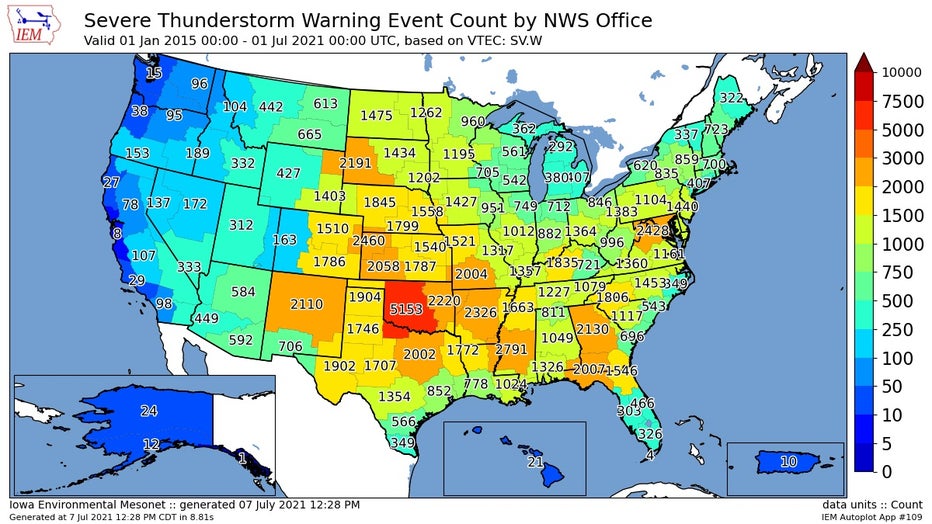 So don't blame a Pacific Coast resident for Tubthumping a potential thunderstorm on social media over what might seem like a run-of-the-mill event. It's a rare show out there.