Landslide risk high in some areas due to heavy rain

Rain continues throughout the day in western Washington.

SEATTLE - The Pacific Northwest is bracing for flooding and landslides, while the mountains will see heavy snow and possible avalanches.

Soaking rains on Monday are pushing rivers towards bankfull today. We've already had some record-setting rainfall totals and more is on the way for later Tuesday.

Flood Warnings are in effect throughout western Washington due to heavy rains.

Places along the coast like Humptulips clocking more than four and a half inches of rain. Inland around Hood Canal, places like Brinnon have seen about three inches of rain. Around Puget Sound, Olympia, Tumwater, and even Seattle are in soggy company with more than two inches of rain. 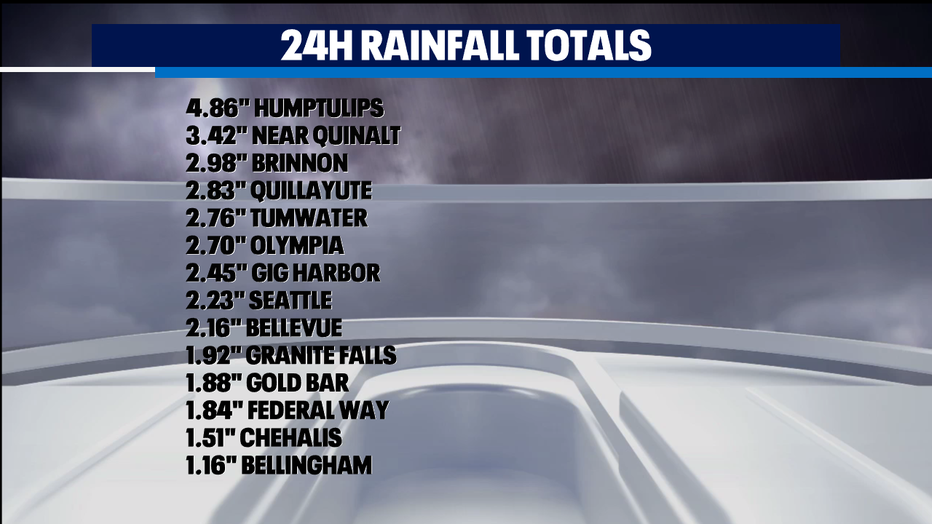 A landslide blocked the northbound lane of US 101 on Tuesday near Artic in Grays Harbor County.

A landslide blocked a portion of US 101 in Grays Harbor County, Washington on Tuesday.

Another slide was reported, fully blocking SR 106 in Union, Washington. WSDOT said crews were on the way to start clearing the road.

And we're not done yet! The atmospheric river is still pointed right at our region. While we see a bit of this plume of moisture sag south briefly today, another surge comes in this afternoon. Often this kind of a weather pattern is known as a Pineapple Express because the front taps into warm moist air that really can amplify the amount of rain we get. 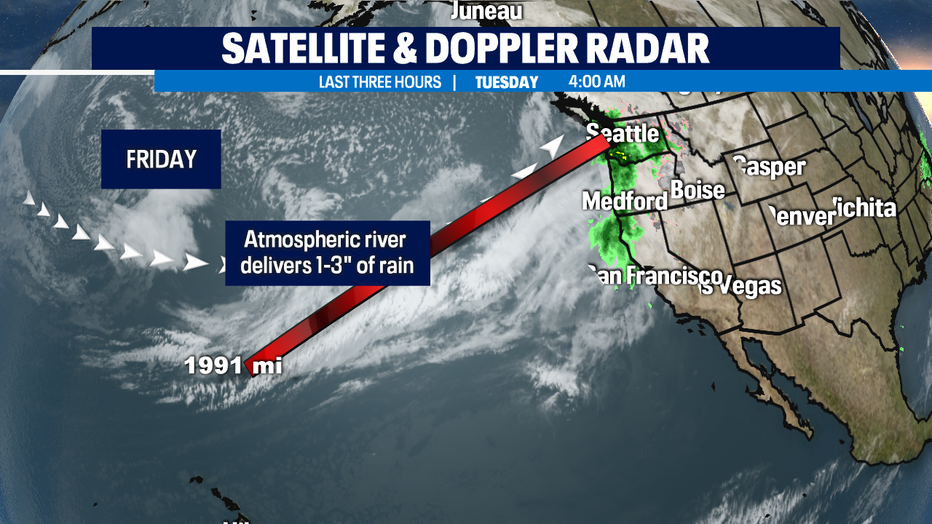 That's the reason why we're near-record warmth today. The number to beat in the record books at SeaTac Int'l is 59 degrees and some places might get close to that around the Central Sound and in the foothills. 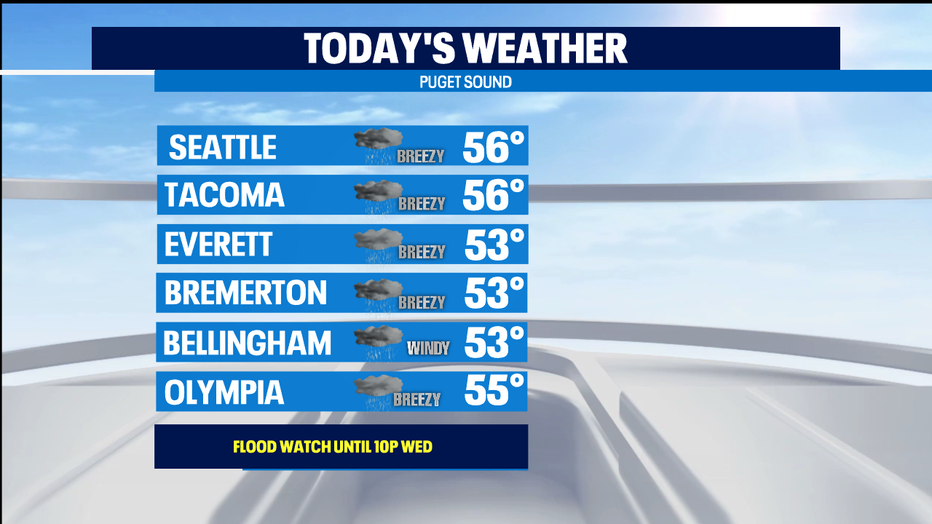 In the mountains, we'll see snow levels rise to almost 7,000 feet, so all our rivers will not only be fed by rainfall, but also melting snow. That's why we've got a Flood Watch that will go all day today, all night tonight, and until Wednesday at 10p. As of this writing, only one river is actually experiencing flooding-- our most flood prone river, the Skokomish River in Mason County. 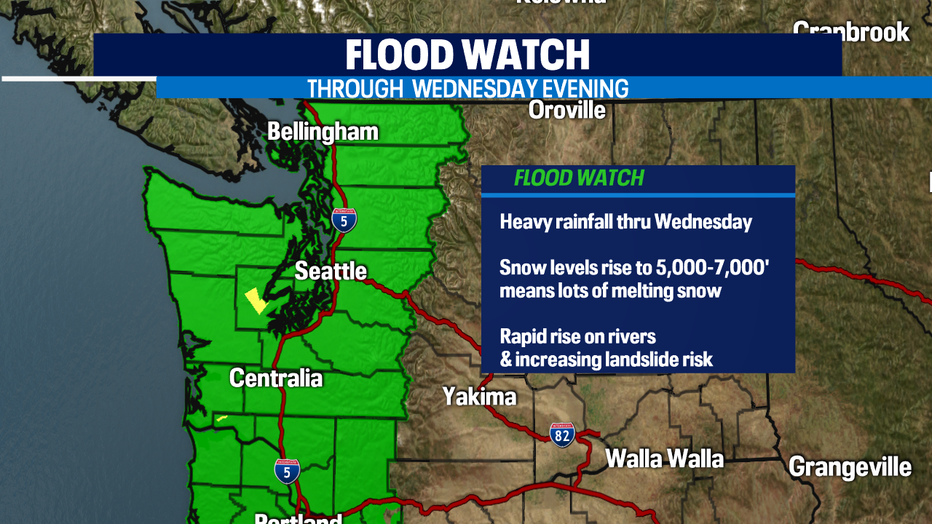 The good news is that the rain is expected to fully taper off Wednesday. And a dry day in the forecast for Thursday. Our rivers levels will get a chance to fall back. Even as we dry out, the landslide threat remains elevated all the way into the weekend. 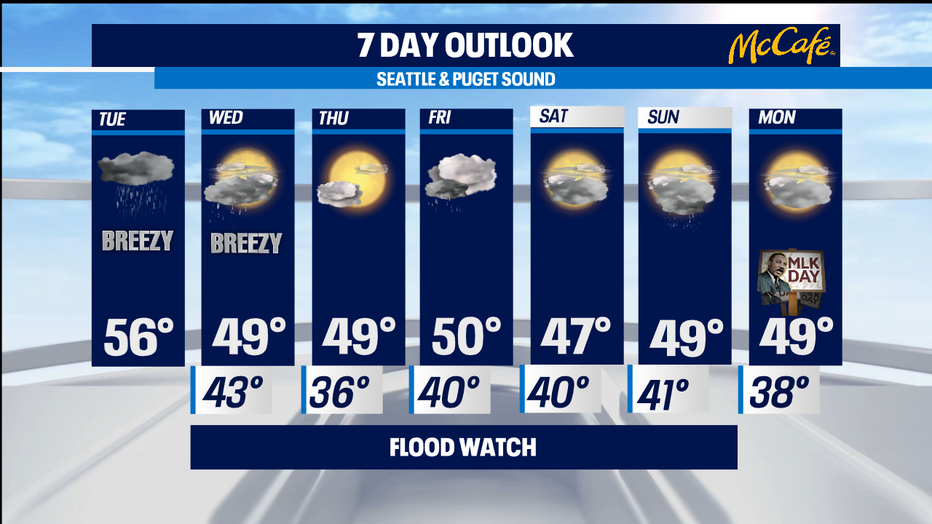 Friday's rain looks to be of the normal light to moderate variety we're used to the soggy NW. At this look at the holiday weekend, I think Saturday will have a chance of showers, a few showers on Sunday, and a dry but pretty cloudy day for the MLK holiday with seasonal temps. -Tim Joyce