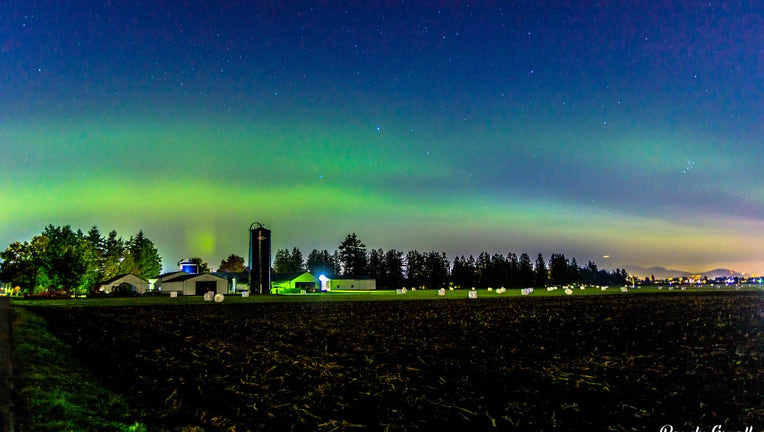 SEATTLE - A strong solar storm brought what many say were the most vivid displays of the Northern Lights seen in the Seattle area in five years.

The first wave of lights didn't wait long after sunset, bathing the northern horizon in green around 9:30 p.m., according to time-lapse video provided by Greg Johnson at SkunkBayWeather.com

After a brief lull around 10:30, the storm exploded in renewed color around 11:30 p.m. as photographers around the region captured the show.  Those perched outside the glare of the city lights said they could see the lights dancing even with the naked eye -- a rare sight in Western Washington.

But even those in the city managed to spot the shimmering green lights above the Skyline:

Aurora displays are relatively rare here -- maybe a couple of times a year, and they're usually faint and only visible in long-exposure photos. This display seems to be the brightest since the intense aurora hit on Mother's Day in 2016.

Vivid Northern Lights displays usually follow a few days after solar events known as coronal mass ejections or solar flares.  The flares bring a barrage of electrons that interact with oxygen and nitrogen in Earth's magnetic field that surrounds the outside of our planet. As the electrons hit the oxygen and nitrogen molecules, it briefly energizes them. And then, as the energy passes, the gas gives off a color -- green, yellow or red for oxygen; blue and purple for nitrogen.

The solar storm was expected to last until around midday Tuesday, then subside, likely meaning any aurora displays will retreat north toward the polar regions.