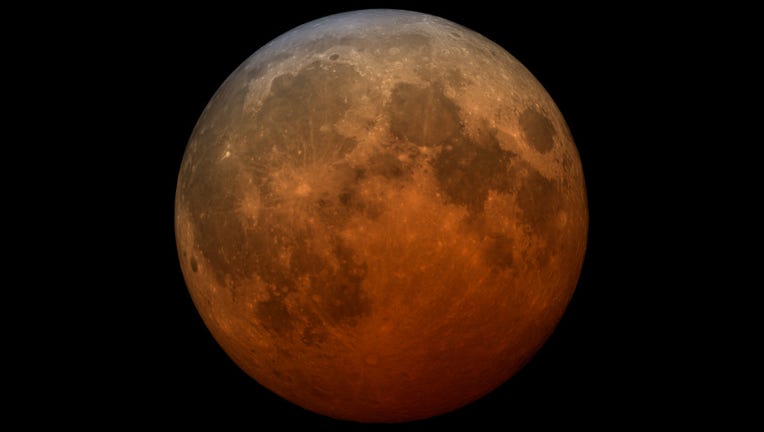 SEATTLE - Early Wednesday morning presents a rare chance to see a lunar eclipse across the Pacific Northwest. The weather is looking marginal for whether clouds will part, but if we luck into a clear patch right along the moon path and you don't might mind being a night owl (or the REALLY early bird), you would see a rather eerie sight: The moon would look red.

First the important stats: The lunar eclipse begins around 1:45 a.m. and peaks around 4:15 a.m., ending at 5:27 a.m. as the moon sets and sun rises. Look for the moon over in the western sky heading for the exact opposite horizon from where the sun will would be rising.  This eclipse is coinciding with the year's "Super Moon" meaning it's happening on the full moon when the moon is at its closest point to Earth, meaning the moon will appear slightly larger than usual.

But unlike a solar eclipse when the sun can get totally blacked out, with a lunar eclipse you can still see a faint glow on the moon. Yet it's not a dim shade of white -- it's usually a dim shade of red or brown, sometimes called a "Blood Moon."  How does it get such a dramatic reddish color?

"If you go outside at night and you see the sun set and the sky turns red or you get up early and the sunrise turns the sky red -- all of that red color is passing through the Earth's atmosphere," said Dr. Noah Petro, Project Scientist with NASA's Lunar Reconnaissance Orbiter. "When the moon passes into the shadow of the Earth during an eclipse, that red from the Earth's atmosphere is projected onto the surface of the moon.  It's the projections of all of the sunrises and sunsets onto the lunar surface, so it's a really beautiful connection between the two bodies."

And the best part is, unlike a solar eclipse when you need special eye-protection equipment to observe the show, a lunar eclipse is safe to look at with just your eyes -- or better yet with binoculars or a telescope.

If we miss out on Wednesday morning's show, it'll be a bit of a wait until our next chance. The next lunar eclipse visible in North America will be on May 15-16, 2022, followed by another chance on Nov. 8 (good luck with the clouds then…) After that, it's a three-year wait until March 2025 for the next chance in the Pacific Northwest.

"They happen regularly all over the Earth but for you to see one from your backyard becomes a nice opportunity," Petro said. "So when those do occur, you definitely don't want to pass those up."