Seattle - Thanksgiving did not disappoint!  From our foggy start to our sunny finish highs warmed above average into the low 50s around Puget Sound. 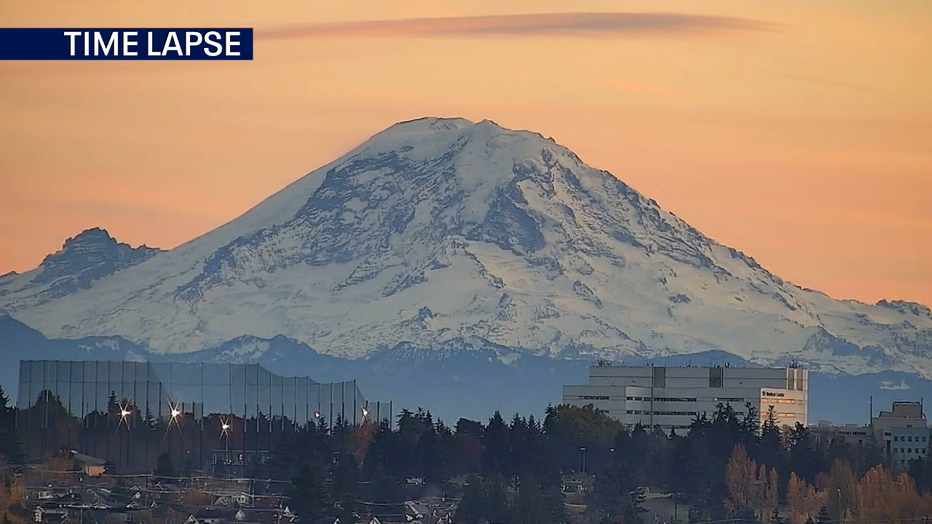 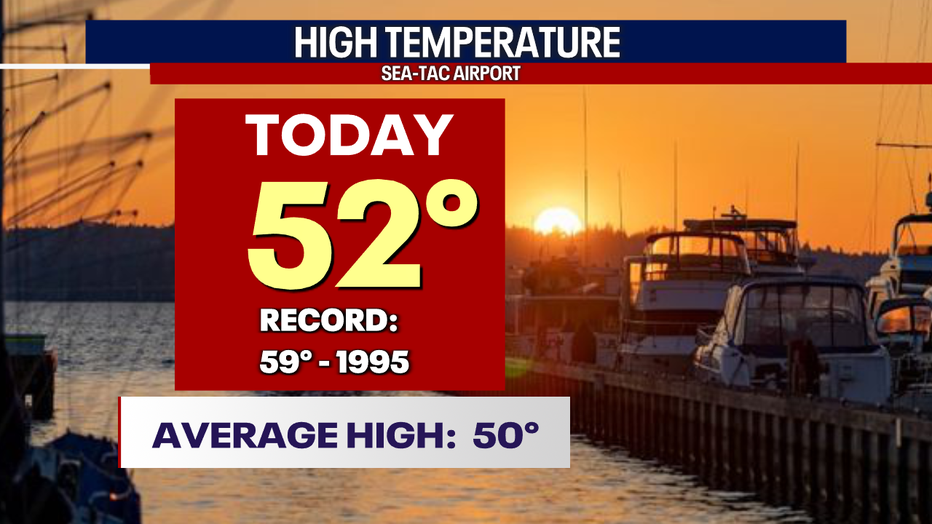 The ridge of high pressure that gave us a beautiful Thanksgiving is slowly shifting east overnight.  This will open the door for the next system to slide in from the north and continue to drop the south Friday. We expect heavy rain through the evening commute. 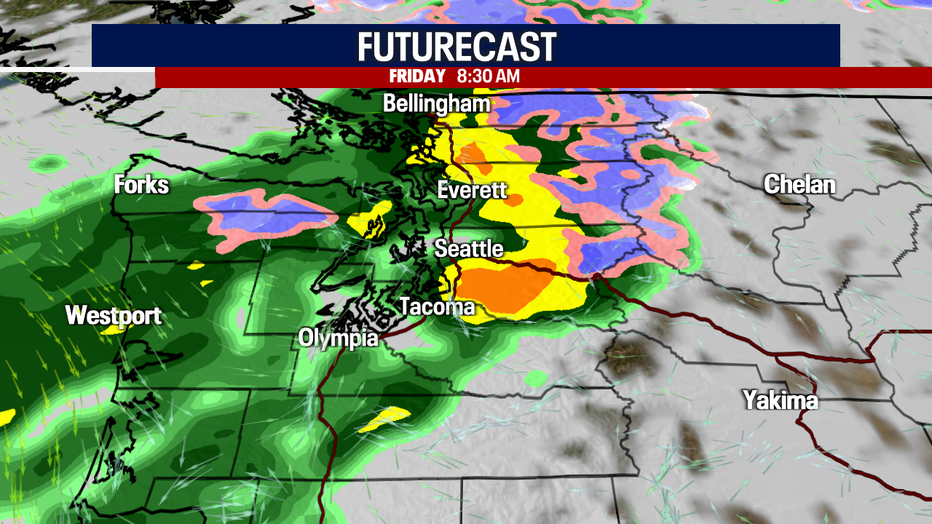 We do dry out Friday night into most of Saturday as we're in a bit of a lull in between systems. 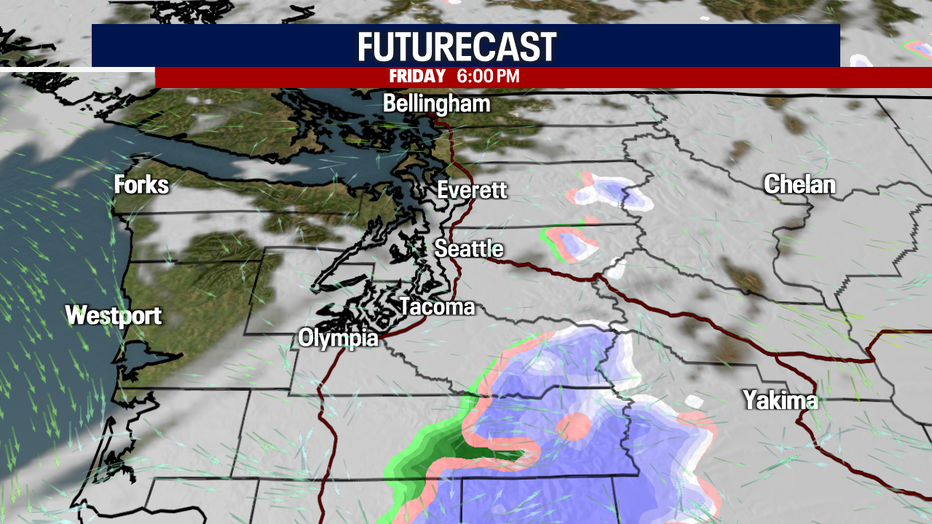 Highs Friday land in the upper 40s to near 50 around Western WA.  The coast and the foothills are slightly warmer by a few degrees. 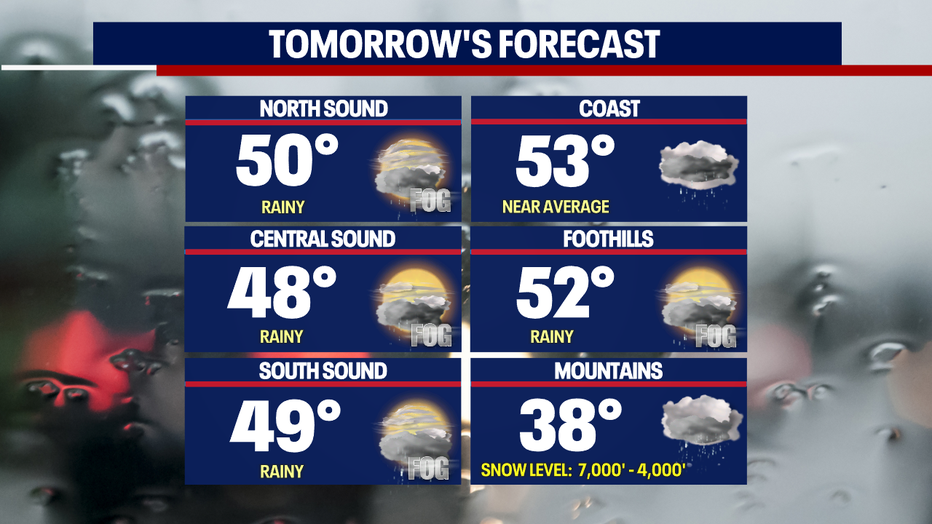 Not only is this a holiday weekend it's also Apple Cup! If you're traveling across the mountains, be aware of conditions as you head over the pass.

A "Winter Storm Watch" goes into effect Saturday afternoon lasting through early Monday morning above 1,500'.  We expect travel to be difficult at times as snow becomes heavy at times.  Look for accumulations 8-15". 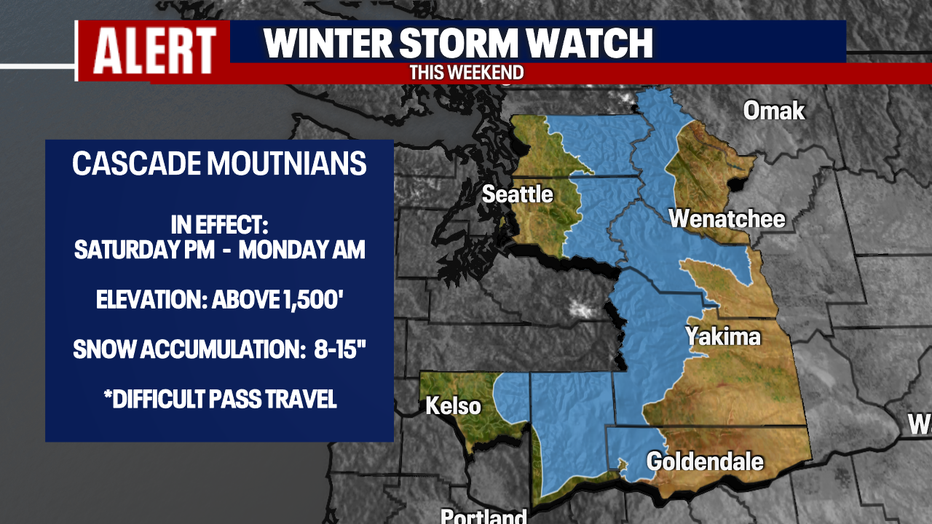 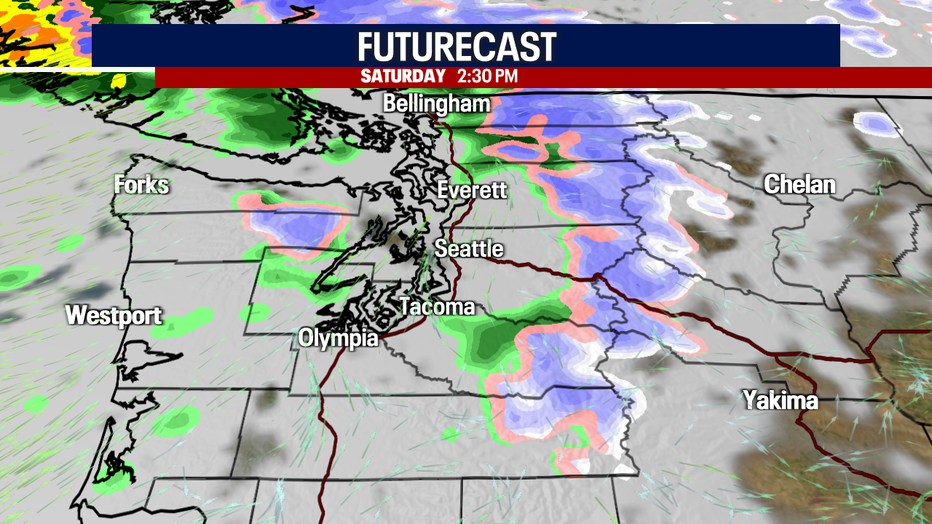 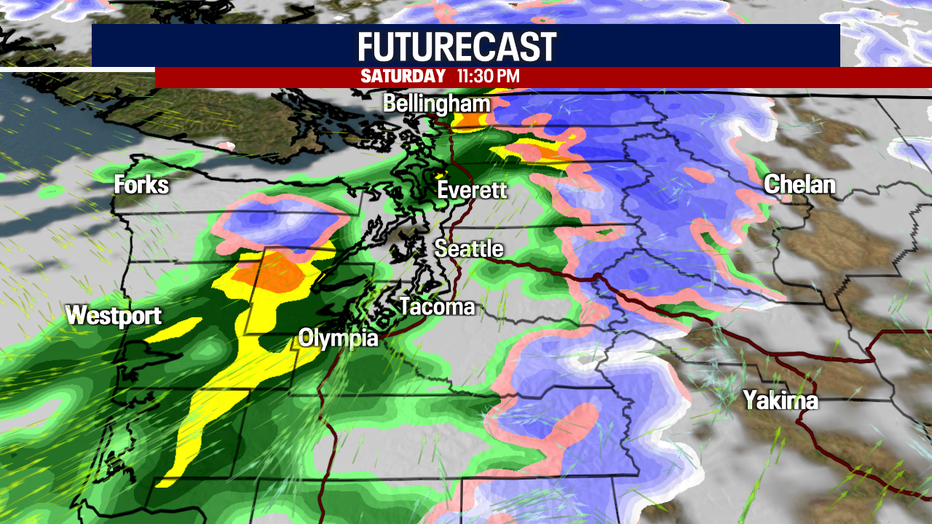 Plan for a very cold 7:30pm kick off temperature in Pullman Saturday as the Huskies and Cougars battle it out for the 113th time!  It literally will be freezing throughout the game… so bundle up!  #GoHuskies 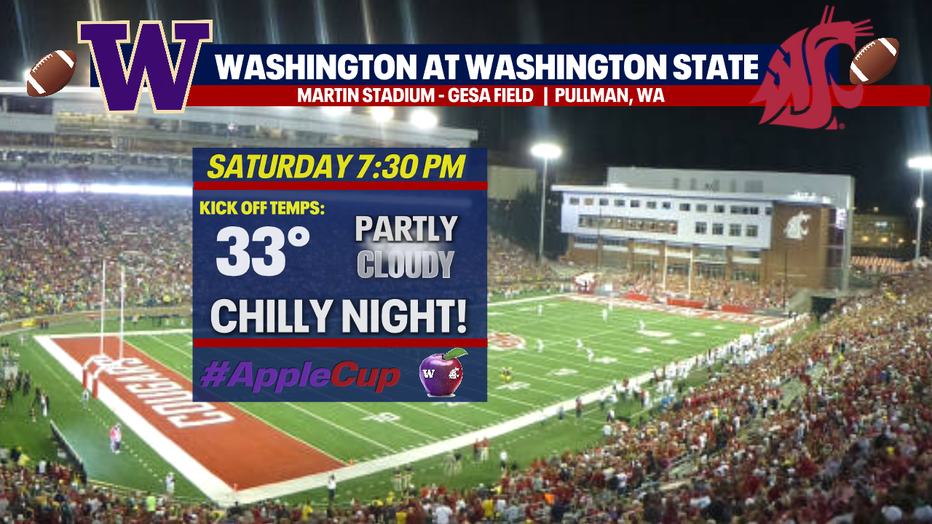 Expect snowy conditions into the Cascades when traveling back west to Seattle from Pullman Sunday.  The "Winter Storm Watch" still in effect.  Know the roads before you go. 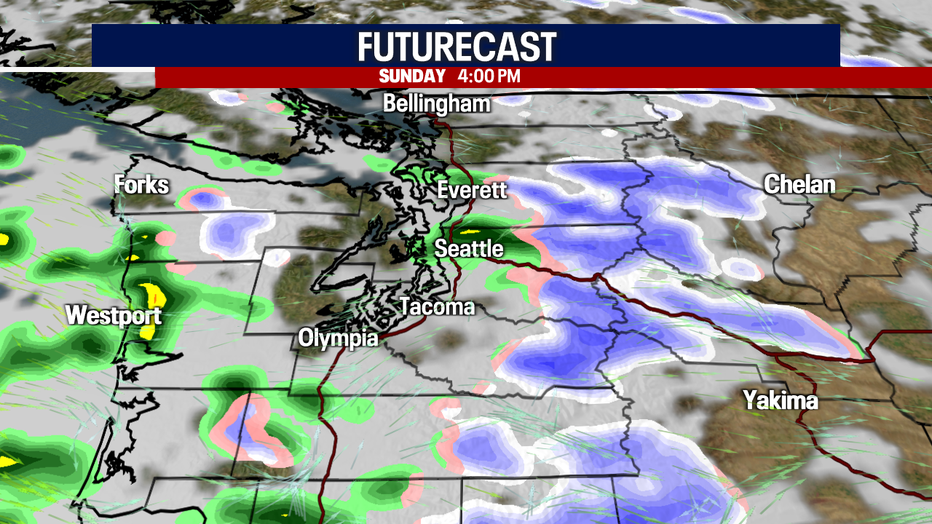 Any leftover moisture Monday could start as a wintry mix for some before we dry out and see a nice, crisp Fall day!  Snow levels Monday drop to 1,000' and will continue to fall into next week. 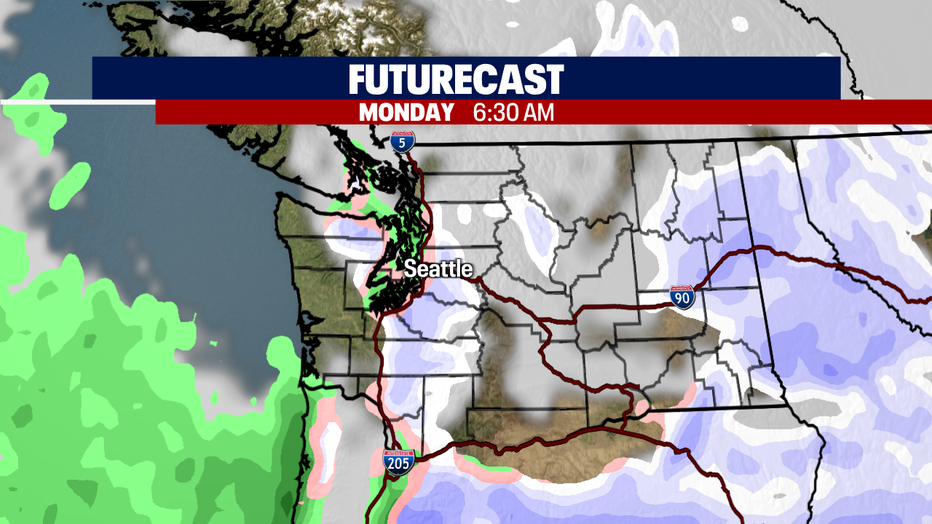 Get ready for a cold air-mass to hang with us through the last week of November into the start of December.  With cold air in place, lowering snow levels, and potential systems swinging through the Northwest we are keeping a close eye on the chance for lowland snow.

Tuesday - Thursday it will be cold, in fact we are forecasting upper 30s to near 40, but there is a chance we might drop even colder.  Add in any precipitation to this mix, and we may just start the new month with a little snow on the ground across the region.  We're not talking about a major snow event, but possibly 1-4" for some.... like areas to the north in Western WA County, the Olympic Peninsula, and Hood Canal have a higher chance for flurries. 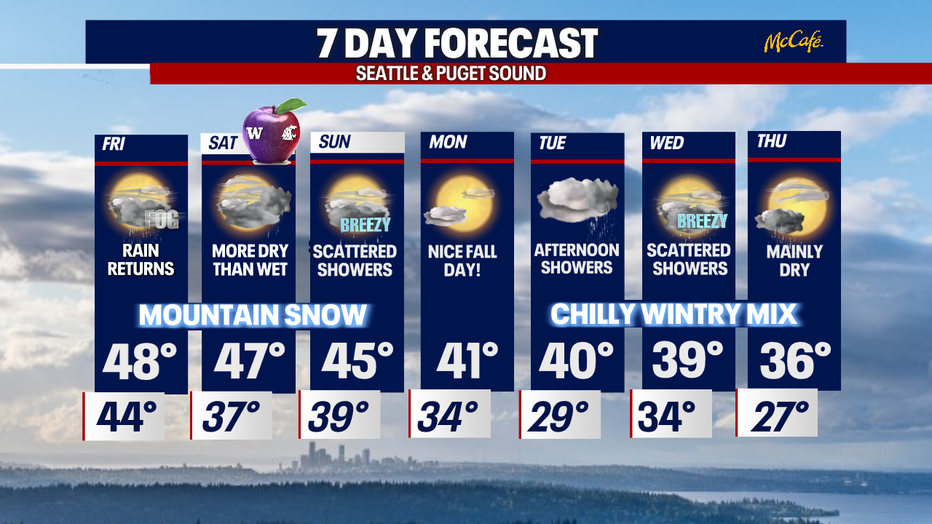 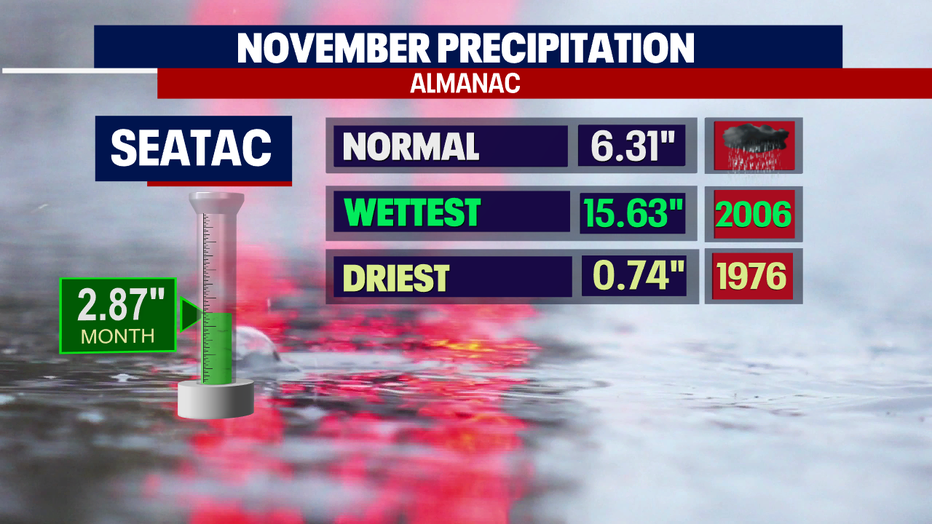