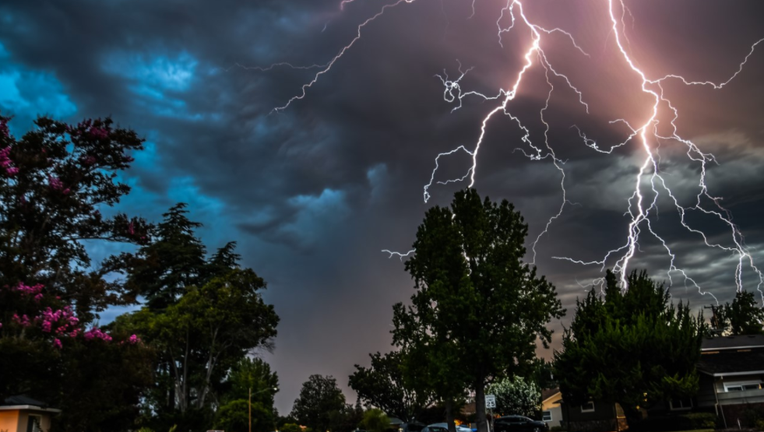 FORT WAYNE, Ind. - As we enter Lightning Safety Awareness Week, lightning safety experts stress that being outside anywhere is a dangerous risk when lightning is in the area.

A simple trip to take out the garbage, retrieve something left outside in the driveway, or a search for better cell service turned deadly for people who ventured outside during thunderstorms over the past several years.

While we might think of lightning dangers as only affecting those caught in the middle of a field, or stuck on a hilltop, lightning safety experts stress that being outside anywhere is a dangerous risk when lightning is in the area.

Over the past five years, the U.S. has averaged 17 deaths from lightning -- though that rate has been steadily dropping since the turn of the century. And that's a credit to a now decades-long effort by the National Lightning Safety Council and National Weather Service to highlight the dangers of lightning and what you can do to stay safe.

"The success of the lightning safety effort has been very rewarding to all of us who have been involved during the past 22 years," John Jensenius with the National Lightning Safety Council tells FOX Weather. "When we started the effort in 2001, the 10-year average U.S. lightning death toll was 55 deaths a year.  That 10-year average has now dropped to 23."

And as mentioned, the rate has dropped to in the last 5 years to an average of 17 lightning fatalities, with only 11 recorded in 2021.

"We don't like to see any lightning fatalities but are pleased that the downward trend continues," he said.

Part of that effort culminates in Lightning Safety Awareness Week, which runs from June 19-25.

The NLSC computes the risk of being struck by lightning in any given year as 1 in 1.43 million, or about 1 in 18,000 in an average lifetime.

Many might think given those low odds they don't have to take lightning safety seriously, but consider these somber numbers:

Since 2006, 446 people have died from lightning. Of those, 40 died while playing outdoor sports -- with soccer and golf the most dangerous. There have been 93 water-related lightning deaths such as boating or swimming.

How to stay safe when lightning strikes during storms

There have been six deaths of children, ranging in age from 7-14, who were struck by lightning while playing outside in a thunderstorm. Six adults and two children have died while trying to care for animals during a thunderstorm, such as covering chickens, bringing in horses, or checking on dogs. Six men have died from a lightning strike while mowing their lawn.

And there have been some deaths from just venturing outside at the wrong moment for the most mundane of tasks:

Other deaths included lowering the blinds on a window, talking on a corded phone, taking laundry off the clothes line, or fixing windshield wipers, according to the NLSC.

WHAT HAPPENS WHEN SOMEONE IS STRUCK BY LIGHTNING

The simple message that can save lives

While most of those instances the victims were only briefly outside, many lightning fatalities occur from people being outside for extended periods as storms approach or pass nearby and people wait "far too long" to get to a safe place that leaves them in a dangerous and potentially deadly situation.

"If you are outside, you are vulnerable to a possible lightning strike," Jensenius said.

He points to their successful safety message: "When thunder roars, go indoors!"

"That simple message can save many lives," he said.  "Chances are that if you are hearing any thunder, even a distant rumble, you're within striking distance of the storm. Many people don’t understand that lightning can strike more than 10 miles from the rain area in a thunderstorm and that even a distant rumble of thunder should serve as an immediate warning to get inside."

Jensenuis also reminds that "every storm has a first flash of lightning."

Florida is the lightning capital of the United States

Lightning density is greatest in Florida, followed by Louisiana, Mississippi, Oklahoma and Arkansas and least frequent along the Pacific Coast and far northern New England coasts, according to data provided by Vaisala. But thunderstorms occur in all 50 states.

Caught outside in a thunderstorm? Run to safety

What if you're out golfing or hiking or just some place where you're out in the open?

Jensenuis says the simple answer is, if you're outside during a thunderstorm, you're in danger. The priority is to get inside.

"The key to safety is to plan ahead to ensure that you can get to a safe place," Jensenius said. "If thunderstorms are predicted, you should consider canceling or postponing the activity if you can't get to a safe place quickly. If you are involved in an outdoor activity and thunderstorms are possible, monitor radar or lightning data if possible, keep an eye on the sky, and get inside a safe place immediately if the sky looks threatening or you hear even a distant rumble of thunder.  If some is caught outside, we recommend running as fast as possible to get to a safer place."

LIGHTNING CHASER SHARES OUT TO CAPTURE NATURE'S FURY ON CAMERA

Research shows about 1 out of every 14 MLB games features thunderstorms within 8 miles of the stadium. Here are the top open-air stadiums for lightning frequency.

That safer place means inside a car or inside a building. You should wait until 30 minutes after the last thunder to resume outdoor activity.

Decades ago, there was advice that if caught out in the open, to crouch down, but scientists now say that is no protection and your goal must be to get inside as soon as possible. To hammer home the point, the latest guidance from NOAA suggests if with a group and caught out in the open, "spread out so that you increase the chances for survivors who could come to the aid of any victims from a lightning strike."

What about if you're already inside?

Being inside is the best place during a thunderstorm, but there are still some "don'ts".

"If lightning strikes your home or near your home, it can follow wires, plumbing, or metal conductors into your home," Jansenius said. "To be safe, you should avoid anything that is plugged into a wall outlet or is connected to outside cables or antennas.  You shouldn't talk on a corded phone.  Also, any plumbing in the house could become energized in a lightning strike.  You shouldn't wash dishes or take a shower.  In addition, we recommend avoiding contact with windows and outside doors that have metal components that would allow the lightning to travel from outside the home to inside."

HOW DO LIGHTNING RODS WORK TO PROTECT HOMES AND BUILDINGS?

And there are many places that people might think offer protection, but don't.

"Many people falsely think that rain shelters, balconies, and building overhangs will keep you safe from lightning-- they will not," Jansenius said. "While they may keep you dry, they do not provide an adequate level of lightning protection

7 of our favorite lightning videos from this spring

As we turn the page to Meteorological Summer, we chose 7 of our favorite lightning videos from this past spring.

Lightning may be closer than you think

Jansenius says another problem is most people think lightning is farther away than it actually is.

If you don’t have a radar app handy, you can count the seconds between seeing the flash of lightning and hearing the thunder -- every 5 seconds of delay equals one mile of distance.

A 12-second delay means lightning is just 2.4 miles from your location. If within five seconds, the lightning flash was within a mile!

"While we don’t have studies to show the exact reason why men are four times more likely to be killed by lightning than women, we suspect it is related to their behavior around thunderstorms," Jansenius said. "Men tend to be involved in certain activities which make them more vulnerable to a lightning strike, but we also think they are less willing to react quickly to a lightning threat."

ADVICE FOR DEALING WITH STORM ANXIETY WHEN SEVERE WEATHER THREATENS

He says 90% of the work-related lightning fatalities such as farming, ranching, roofing, and construction are men.  Similarly, about 90% of the victims involved in fishing or sports activities are male.

"Some of the male-dominated activities may also require extra time to get to a safe place," he said. "However, I should point out that men also account for about 75% of the beach-related deaths, likely indicating that they are less willing to react quickly to a lightning threat."

While there have been dozens of deaths each year due to lightning, most survive a lightning strike.  Jansenius says some 90% survive the strike, but may have to suffer life-long neurological problems.

He adds the most common cause of death when someone is struck is cardiac arrest.

"Many victims can be revived with CPR," he says. "If someone is struck, call for help and begin CPR if necessary."