Warmer weekend ahead, but still some rain expected

Make sure you check the passes before you travel!

On this holiday weekend, we're tracking a major ice storm over Stevens and Snoqualmie Passes. Thankfully, temperatures are warming up in the lowlands. This means that all the snow and ice is melting, giving way to wet roads. 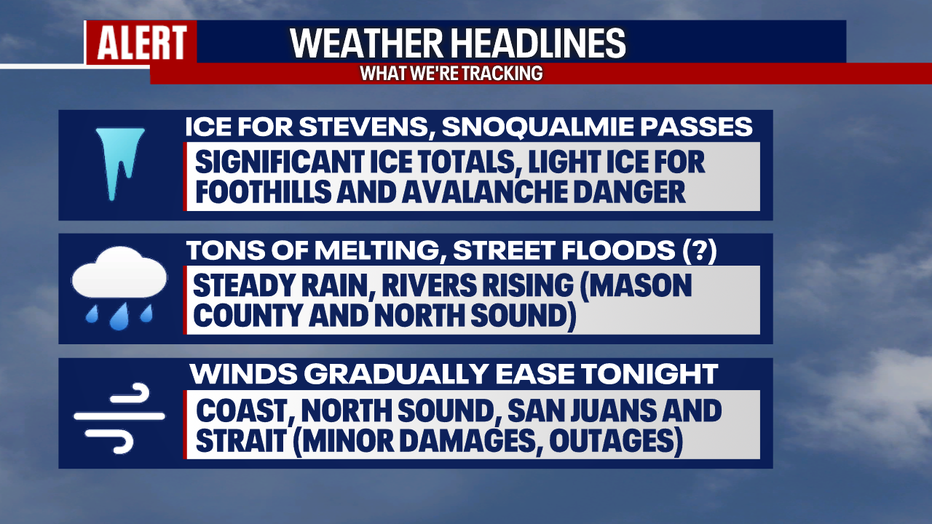 Here's a look at this Ice Storm Warning in effect until 4 a.m. Sunday for Stevens and Snoqualmie Passes. Already today, there have been closures over Stevens Pass and for eastbound traffic along I-90 near North Bend at milepost 34. Stay tuned to WSDOT and FOX 13 for updates throughout the day. Up to one inch of ice could accumulate over these passes today, likely bringing down trees and power lines. It will be exceptionally difficult weather for drivers. I strongly recommend that people don't travel over the passes today if they don't have to. Better weather is forecast tomorrow.

Over some of the Cascade foothills, there's a slight chance for freezing rain and light ice accumulations through this afternoon. However, for the most part, precipitation should fall in the form of plain old rain. 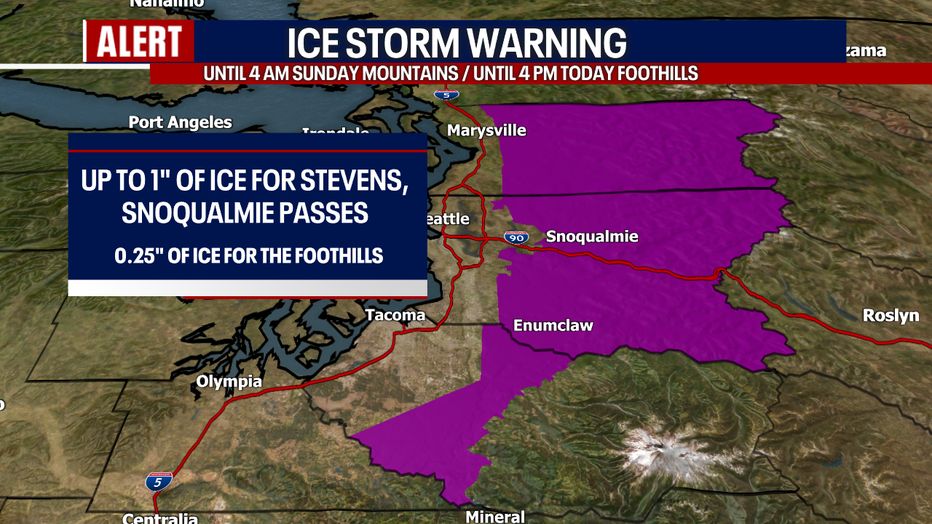 There's an Avalanche Warning in effect for everyone in red through this afternoon. Snowpack over the backcountry is very unstable. The Northwest Avalanche Center says that Stevens Pass, the eastern slopes of the Cascades from Chelan to just south of I-90 are at risk. Large, natural avalanches are in the forecast. 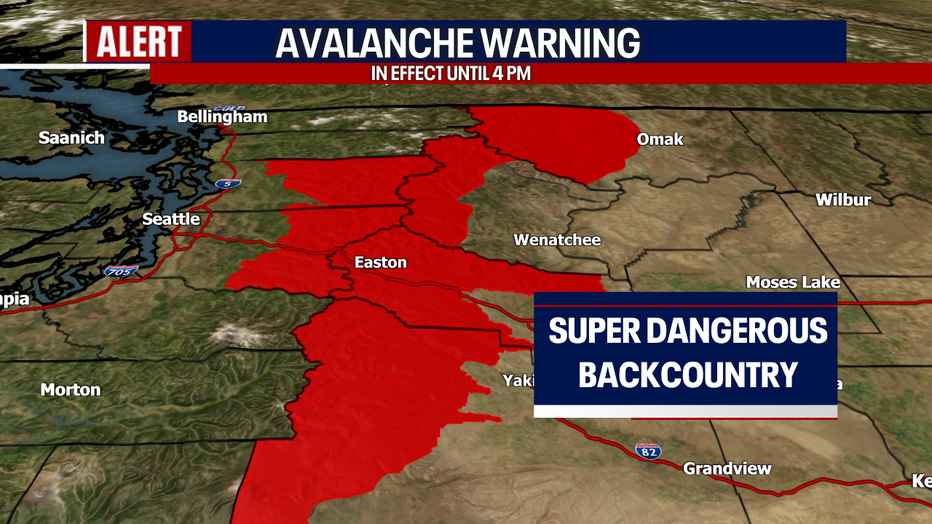 Winds are strong in some areas today. A Wind Advisory continues through 4 p.m. for the North Sound, inland waters, San Juans, Strait and the coast. Minor damages and power outages are possible. Winds will gradually ease tonight. 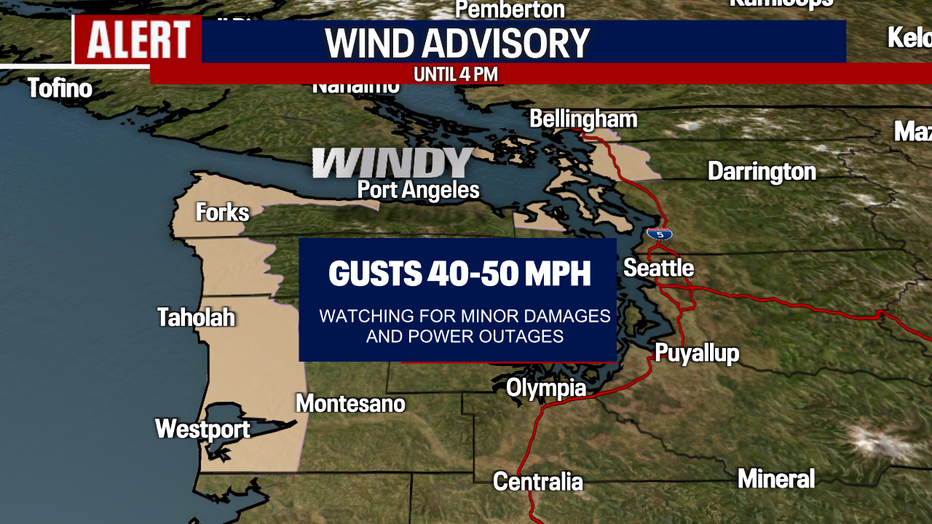 Otherwise, be ready for sloppy and soggy roads. As highs warm into the upper 40s and low 50s, ice will melt. We can't rule out localized street flooding where rain comes down heavily. Runoff is possible if storm drains are clogged.

There's a Coastal Flood Advisory in effect for the lime green through this afternoon. In the forest green, a Flood Watch remains in place for Mason, Snohomish, Skagit and Whatcom Counties through Sunday night. Rivers, creeks and streams will be rising. Widespread river flooding isn't expected, but some rivers could near or exceed flood stage (especially as we forecast another "atmospheric river" event going into Monday). 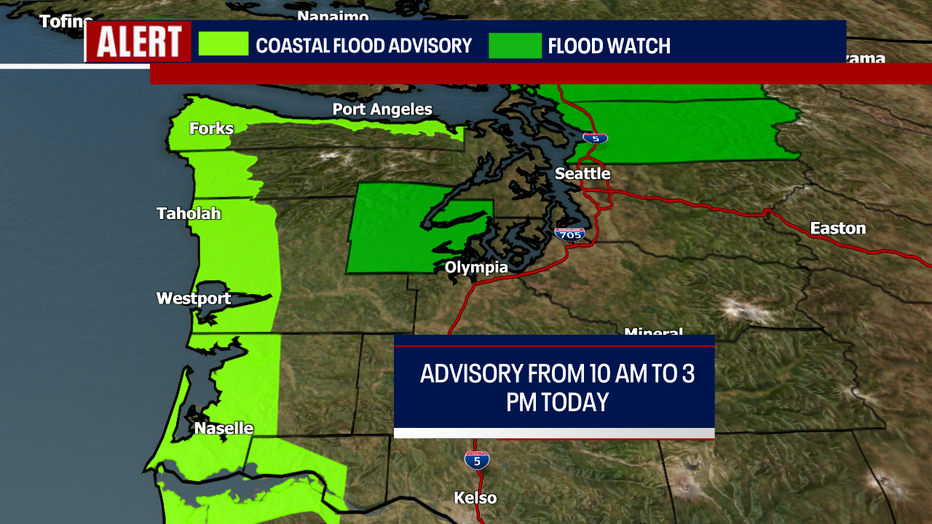 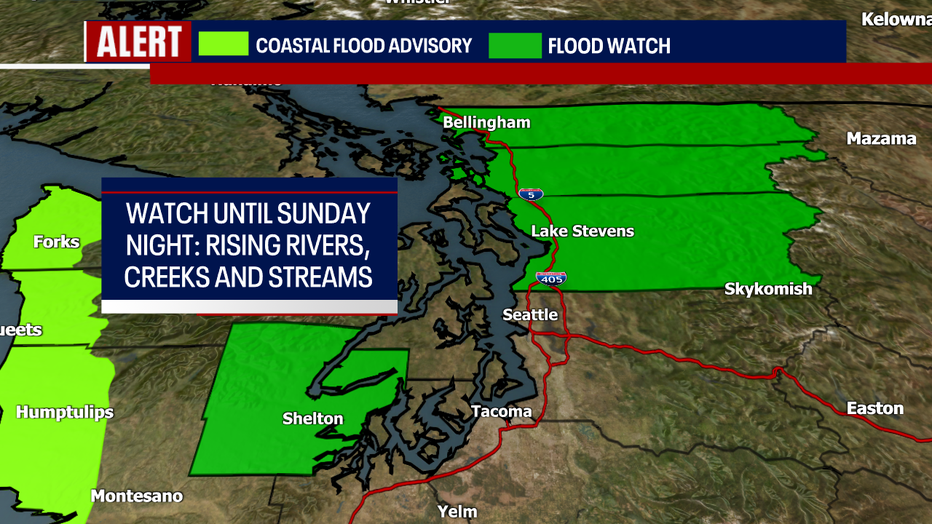 Christmas Day will feature temperatures in the 50s with on and off rain. Heavier rain sweeps through Western Washington on Monday. Tuesday looks breezy to locally windy (stay tuned!). Wednesday through Friday will probably feature lowland rain and mountain snow. 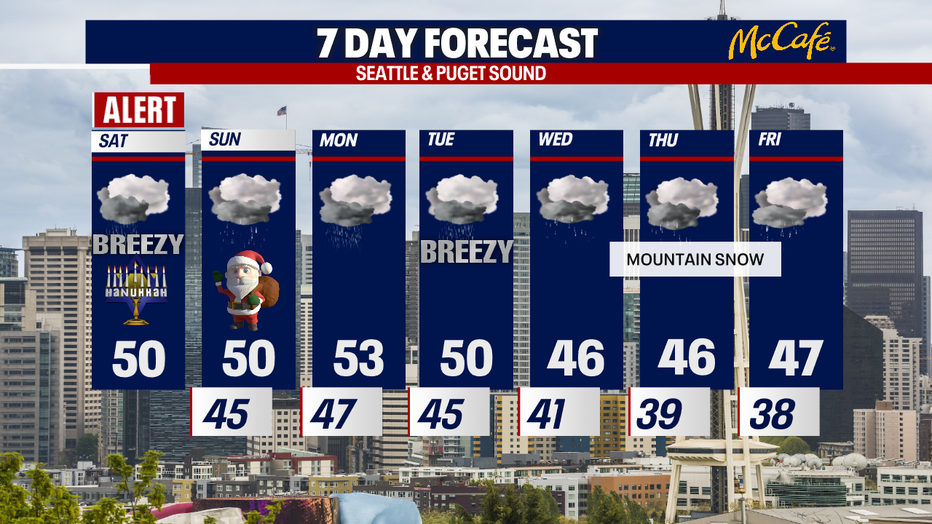 Hope you have a wonderful and safe holiday weekend.