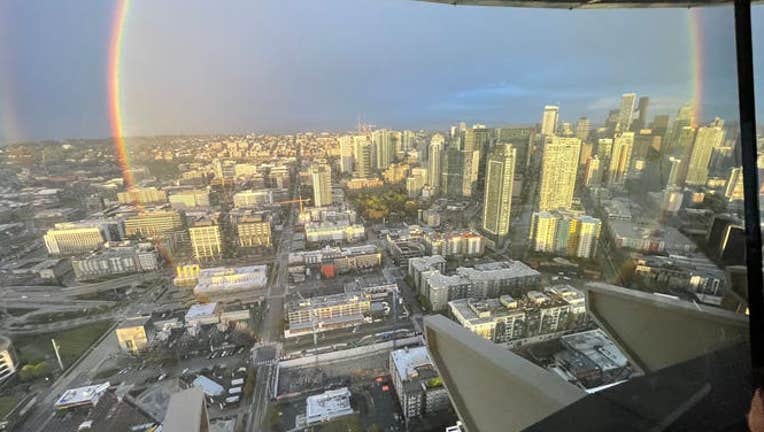 SEATTLE - Not only do the April showers bring May flowers, but they're a frequent catalyst for rainbow sightings.

We're all familiar with the arc of color that stretches across the sky, but have you ever seen a rainbow come full circle?

Photographer Johnny Robinson was atop Seattle's Space Needle observatory deck on Thursday and spotted not just a traditional rainbow arc, but the full halo.

It’s a simple sight of beauty with a complex process behind them.

"Rainbows are formed by a combination of reflection and refraction inside raindrops," says Michael Kavulich, a research scientist with the National Center for Atmospheric Research in Boulder, Colorado. "When light enters the raindrop, it bends due to this refraction phenomenon (which) affects different wavelengths of light slightly differently. So a red light is going to bend slightly less than blue light."

That's the key to getting the colorful arc.

"If anybody's ever played with a prism – you can see that when white light comes in one side, you get this nice rainbow pattern out the other side. That's essentially what happens inside millions of raindrops inside a rainstorm as the sunlight is shining on that," Kavulich said. "Sunlight will reflect off the backside of the raindrop. And as (the light) comes back towards you, since it's undergone this refraction now, instead of seeing white light as it came from the sun, you now see slightly different colors from slightly different angles. You'll see the red all the way through the blue – and even violet." 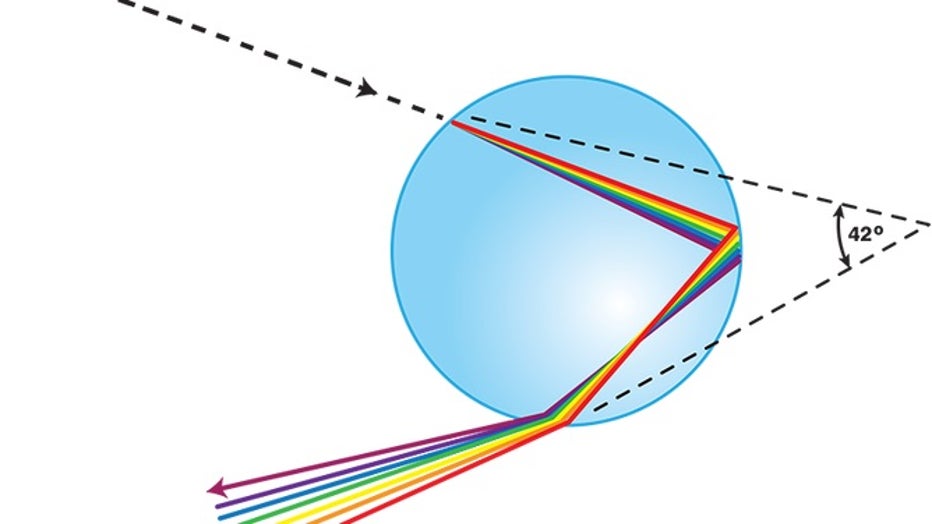 Water refracts visible sunlight at around a 42-degree angle, and thus, all rainbows are full circles at an angular radius of 42 degrees.

"So if you had some kind of crazy planet with a different substance raining out, you'd have a different-sized rainbow," Kavulich said. 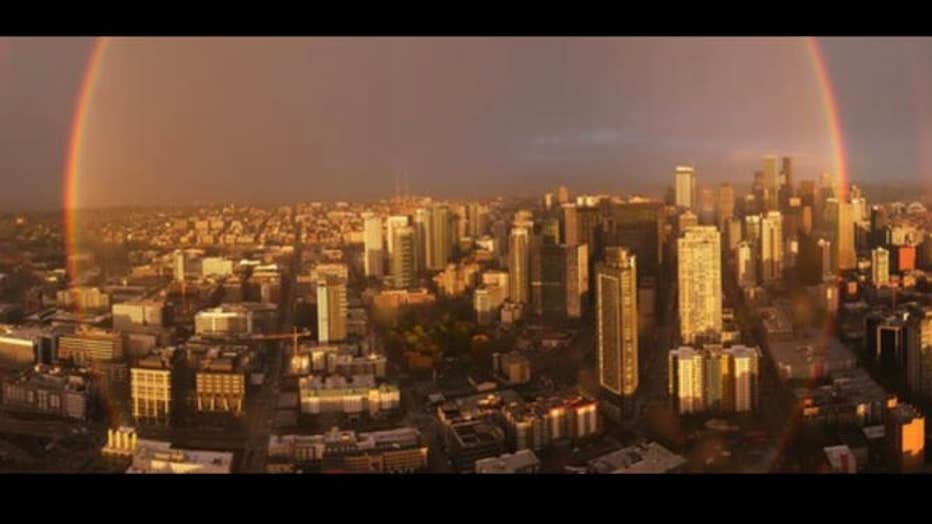 Rainbow as seen from Seattle's Space Needle on April 21, 2022

But here is the key to why someone standing on the ground would only see half an arc, while Robinson could see the full circle despite witnessing the same atmospheric process: The ground gets in the way.

The ground "blocks" the bottom half of the circle, and that's why it appears as a rain "bow" and not a rain "circle." Here is the same rainbow weather setup as seen from the ground near Seattle's Kerry Park:

However, if you were to gain some altitude and be able to look down – say, looking out a plane or overlooking a cliff – or perched 500 feet high from the observation deck of a Seattle landmark, you can sometimes see most, if not all, of the full circle of a rainbow.

Don't go looking for the rainbow on your summer lunch hour

On the other hand, sometimes the sun is too high in the sky to see a rainbow from the ground.

Here's a fact to stump your friends at your next dinner party: You won't see a rainbow at lunch in the summer, no matter where it might be raining and sunny simultaneously.

(LINK: Calculate the sun’s position at any given time and place. Is the azimuth less than 42 degrees? If so, then rainbows are possible.)

The best time to get the most dramatic rainbow sightings are near sunset when the sun is low on the horizon. That alignment brings the tallest arcs for rainbows, plus maybe you'll get some colorful clouds from the sunset too.