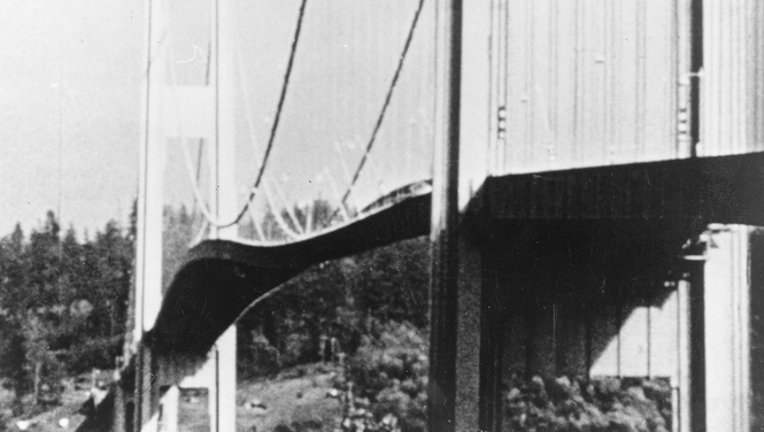 It was 81 years ago Sunday that a windstorm would first turn the months-old Tacoma Narrows Bridge into an extreme version of "Galloping Gertie," then lead to its spectacular demise as the bridge collapsed into Puget Sound below.

Miraculously, no people died, but the bridge did claim a life: Tubby, a three-legged black Cocker Spaniel that remained trapped in his car as the bridge wobbled, then fell.

Leonard Coatsworth, a news editor for the Tacoma News Tribune, was driving on the bridge on Nov. 7. 1940, with Tubby in the backseat, according to Washington State Dept. of Transportation historians. The bridge had frequently swayed in the wind since its grand opening four months earlier, giving it the "Galloping Gertie" nickname.

But on this November day, the wind was blowing at 42 mph, and it was more than "Gertie" could withstand.

3 failed attempts at saving the dog

Coatsworth had made it about 450 feet onto the east side of the bridge when it began to violently sway, making the car stop. Coatsworth abandoned his car at first, then tried to go back for Tubby, but the bridge shook too much.

A photographer colleague of Coatsworth happened to be there and tried to make it to the car but also had to turn back.

A third attempt was made by Professor F.B. Farquharson, an engineering professor at the University of Washington, who was there to document the bridge's frequent sways. Farquharson made it to the car and opened the rear door.

"He tried to calm the sick, terrified pooch, but Tubby snapped at the friendly hand, nipping the knuckle," according to the WSDOT.

Farquharson stumbled his way back off the bridge in the nick of time, and that section of the bridge collapsed moments later.

Tubby and Chatsworth's car fell about 200 feet into the Tacoma Narrows, where swift currents carried the car and Tubby away.

Neither has ever been found. The bridge remnants sit 180 feet underwater.

Can you place a value on man's best friend?

In the months after the collapse, Coatsworth had a devil of a time getting reimbursed for his car and dog's loss.

After several months of back and forth, Coatsworth finally received $450 from the Washington State Toll Bridge Authority for the loss of his car…. and $364.50 for his car's "contents" -- including Tubby.

There were some other weird events tied to the bridge collapse

The WSDOT historians noted several other oddities that occurred with the collapse of the bridge:

* The day before the bridge collapsed, a journalism class at nearby Fife High School was tasked with writing an essay to use their imagination and write a story that began with "Just suppose…". One student's paper: "Just suppose the Tacoma Narrows Bridge collapses."

* A billboard near the bridge advertised a bank proclaiming they were "as secure as the Narrows Bridge." The ad had been covered with plain paper within an hour of the bridge's collapse.

* A photo of Farquharson – the one bitten while trying to save Tubby – appeared the next day in the Seattle Post-Intelligencer newspaper, showing his left index finger wrapped with a bandage. The photo caption read "Token of 'Gratitude.'"

* Five days after the bridge collapse, a woman from nearby Puyallup was said to have died after being stricken at the sight of the collapsed bridge.

*The sunken remains of the bridge is now an extensive reef, and in 1992 was placed on the National Register of Historic Places to protect her from salvagers, the WSDOT said.