SEATTLE - Another smoke-filled day around Washington State. The air was so thick with wildfire smoke it kept our temperatures down by about ten degrees compared to Friday afternoon. With a high of only 61 degrees at SeaTac, it was our coldest day around Seattle since May 3rd. 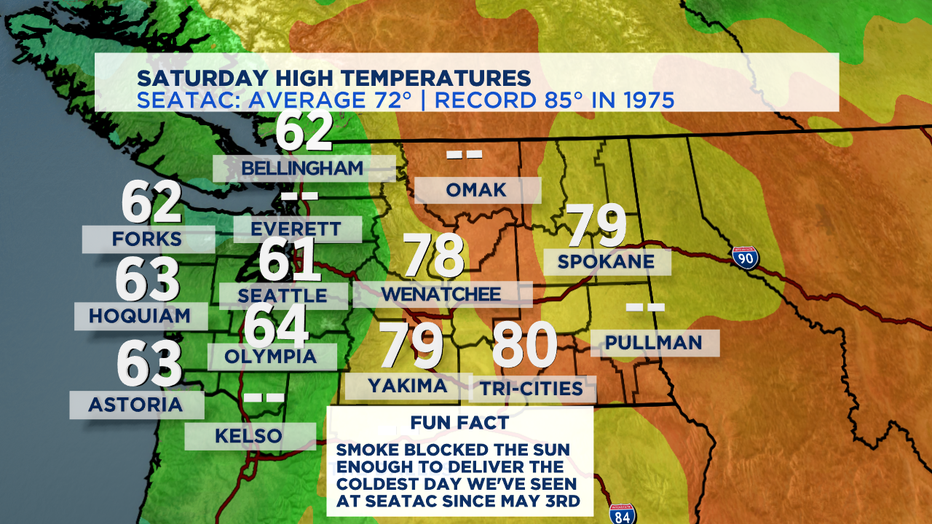 Air quality hovered for most of us between unhealthy and hazardous in most locations. Air typically expands during the day with heat and contracts at night as things cool off-- so another round of dense hazardous smoke is likely tomorrow morning for just about everywhere. Here's the view around the peak of Saturday's "warmth" from about 700 feet above Seattle from Q13's Capitol Hill tower camera. 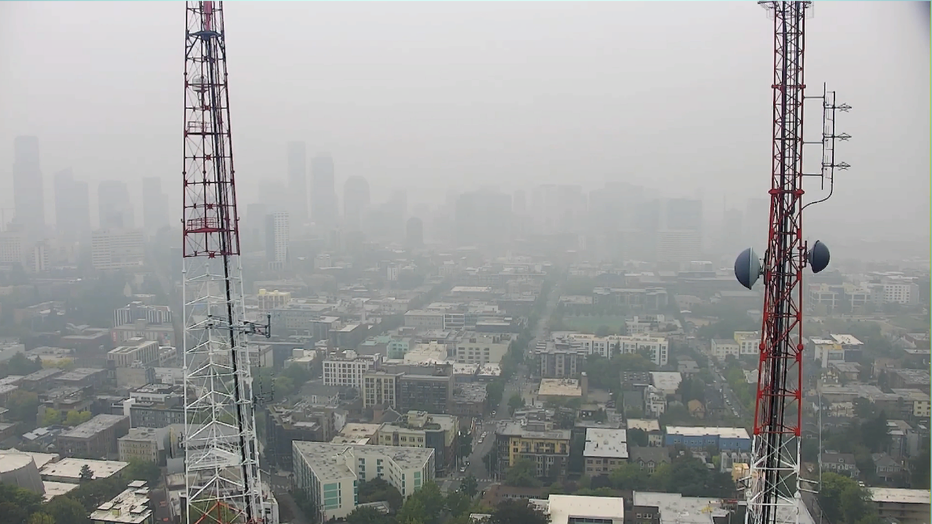 The Nat'l Weather Service Seattle office estimated the Saturday morning smoke layer to be about 10,000 feet tall. So there are only four places where you could have escaped the smoke today in the whole state-- and you'd probably need really good climbing boots and maybe an ice ax to get to those places high up on Rainier, Adams, Baker, or Glacier Peak. 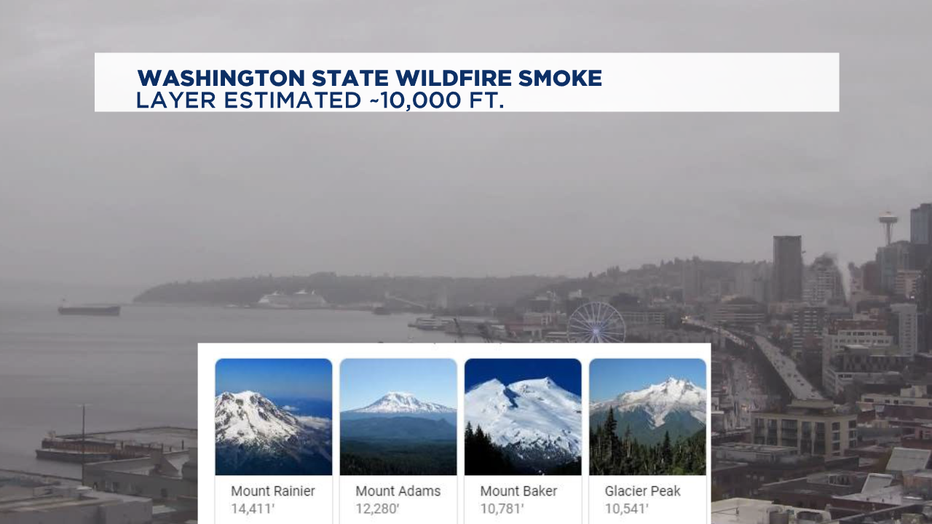 I wasn't kidding on Friday night's news that it was a mountain of smoky air that was descending on the region-- and we've still got about 400 miles of a smoke cloud to deal with before we see a significant shift in our west coast weather pattern. 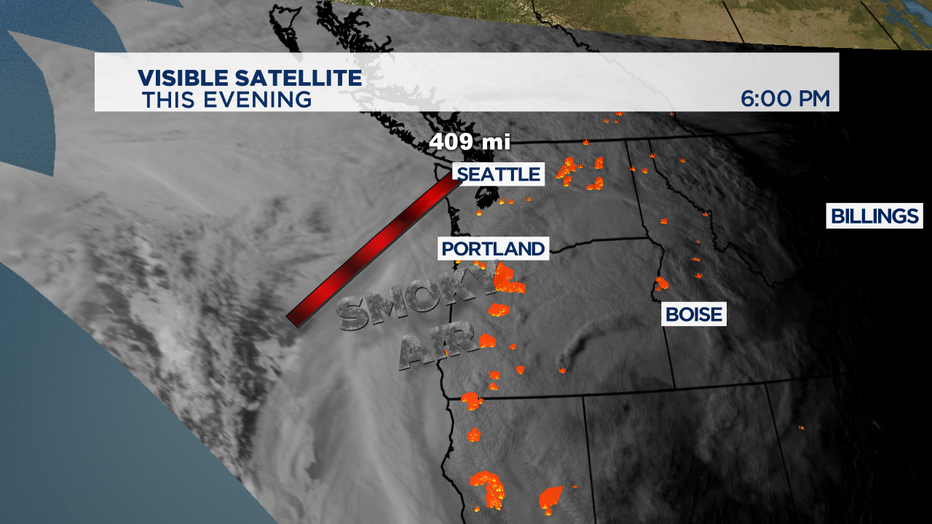 So, a smoky, hazy unhealthy air day expected again for Sunday, with only minor improvements that could allow our temps to climb into the mid-60s. Peeks of some clear-ish skies are possible for some briefly in the afternoon but probably only areas towards the coast, but not a whole lot for Puget Sound. 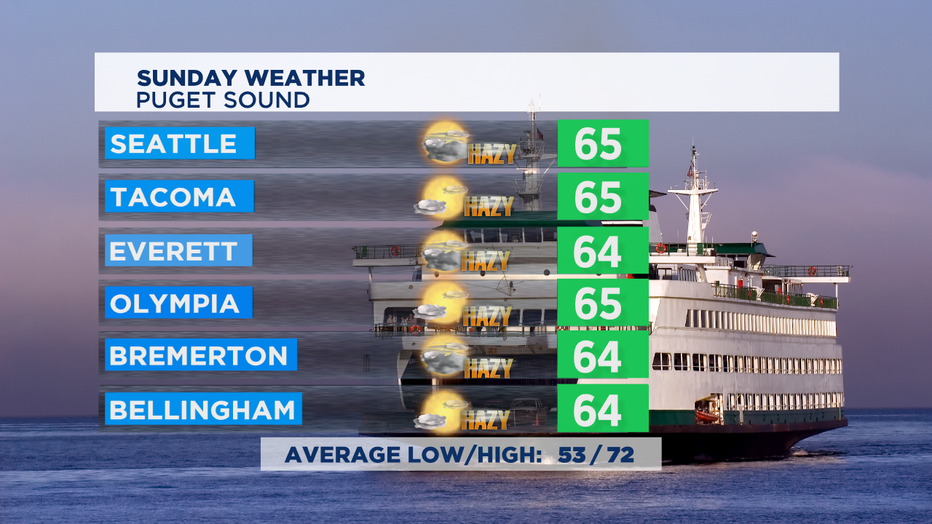 The good news is we've got a couple of weather systems heading our way to deliver some beneficial and cleansing rain. The big question mark is will it be enough to really wash all the microscopic particulate matter out of our air. At this point, the Air Quality Warning is set to expire at noon on Monday. My current thinking is that it won't be quite enough-- so pockets of moderate to poor air quality could linger into mid-week. 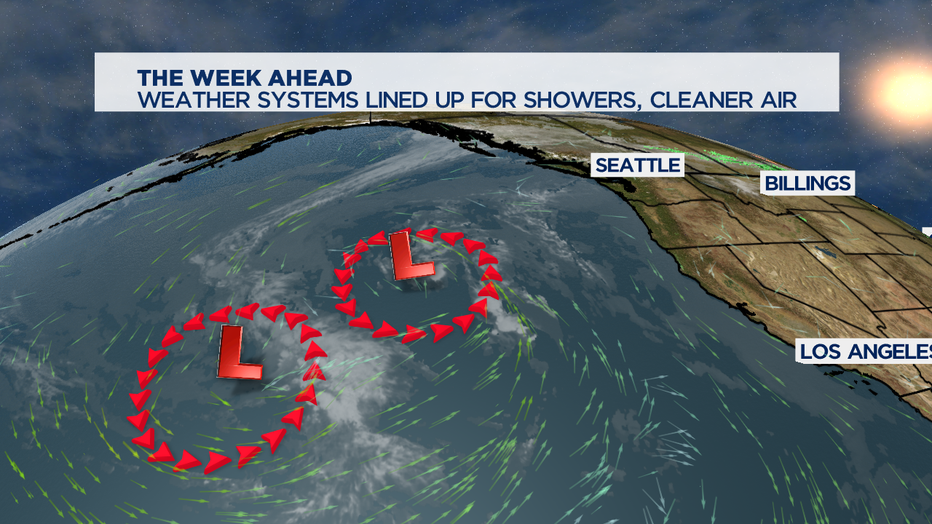 If these systems develop into something soggier, then we could see some really gorgeous and pleasant late summer days on Wednesday and Thursday. If it's not enough rain to cleanse the air, which is more likely, another round looks to some showers late in the week to finally get the job done. 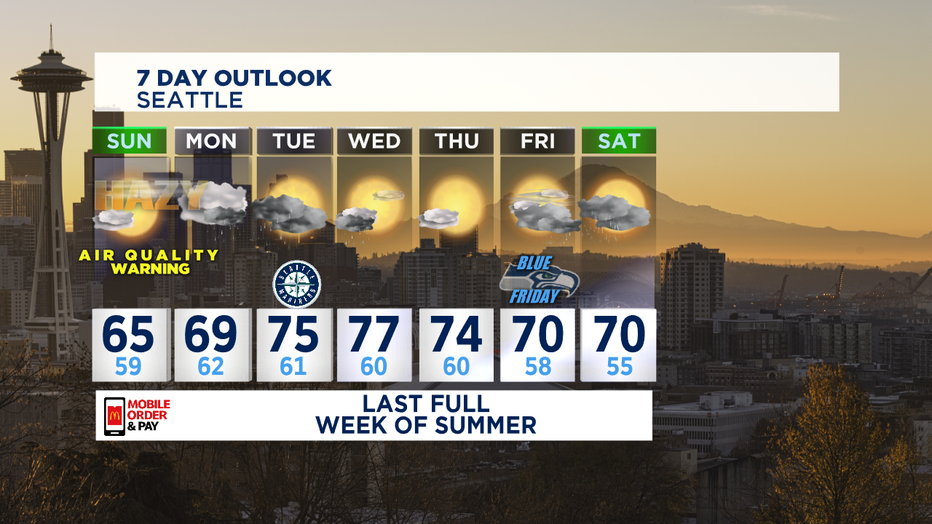 The biggest wild card is more wildfires-- cause it's still tinder-dry in the region. Most wildfires are human-caused by things like dragging tow chains, driving into tall dry grass, cigarette butts thrown out of a car window, burning trash/recycling, not keeping an eye on freshly laid mulch/bark dust that can ignite if they're too dry or too deep. Or in some cases like we saw this week-- people starting fires intentionally.