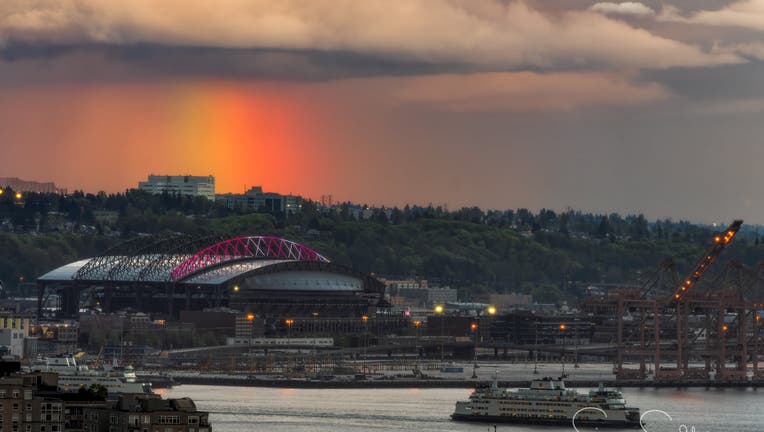 SEATTLE - A damp, gray spring day in Seattle was suddenly washed in color as a vivid rainbow appeared over parts of Downtown Seattle on April 25.

The colorful display was indeed a rainbow, but there were a few factors in play to give it this broad, diffuse look.

First, the sun was nearing the western horizon as sunset loomed in 20 minutes. Rainbows that appear near sunset are among the more dramatic as the low sun angle allows for rainbows to stretch high into the sky, whereas rainbows that form earlier in the afternoon when the sun sits higher above the horizon make for smaller arcs.

Thus in this case, the visible rainbow was part of what would have been a very large rainbow had the widespread, thick cloud cover not obscured much of the show. Instead, we could only see this little corner of the bow.

The spread in color came from an intense drizzle on the outer edge of the main band of rain. The tiny raindrops are not as efficient in refracting the sunlight into the colors of the rainbow, so you get a more diffuse look than easily picking out the rows of red, orange, yellow, green and blue, etc. But the intensity of the drizzle meant there were a lot of those tiny droplets packed into a tight space, allowing more light to reflect back to Sigma's camera and juicing up the brightness.

Sadly, pots of gold at the end of rainbows remain a myth, though with this particular bow ending right atop Seattle's T-Mobile Park, perhaps Gold Gloves are in the offing for the Seattle Mariners?