Fall storm on its way to Western Washington

SEATTLE - Happy Fall! Hope everyone was able to enjoy some of the blues skies today as a big change is already on the way tonight!

Our Fall season kicks off with a pretty strong storm.  Starting as early as Tuesday on the coast we'll see the latest system packing a one-two punch.  Mother Nature is sending heavy rain at times along with gusty winds overnight into Western WA.

Here's what to expect with rain and wind this week and into the weekend:

TONIGHT:    Rain and wind hit the coast just about 12am. Expect sustained winds out of the south at 30-35mph, gusting as high as 50mph at times. Overnight lows are mild, landing in the mid to upper 50s.

WEDNESDAY: Heavy rain at times.  Some areas, like coastal communities, will likely see 1-2" inches of rain and the Olympics Mts even more, possibly up to 4".  By 7 a.m. Puget Sound will feel the impacts of the storm.  Throughout the day rain will increase, delivering about 1/2-1" inland.  The other factor, the winds! Look for gusts of 20-25mph. Highs will cool, landing below normal in the mid-60s.  Rain will continue into the overnight hours as well. Here is a look at the Advisories the National Weather Service is issuing during the storm. 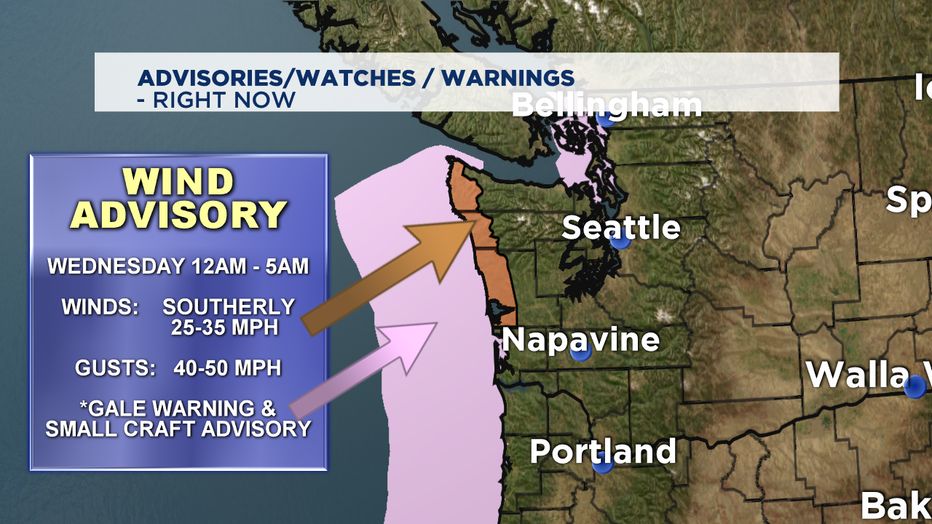 Also, here is our look at our futurecast model as the storm moves in Western WA on Wednesday.  This gives you a better idea of the big picture and widespread rain.  Notice the dark green, yellow, and orange colors on the map which indicates some really powerful cells moving through. 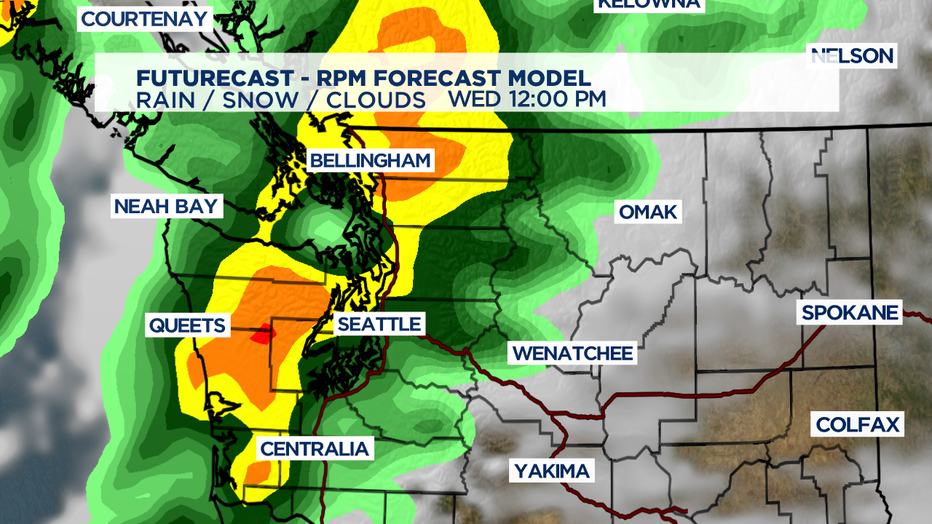 THURSDAY & FRIDAY: More rain as a series of smaller disturbances heads our way! Unfortunately, we won't get too much of a break from the precip, it's as if someone pointed a hose at the Pacific Northwest and forgot to turn it off.  And because of the instability in the air we may see a few pop-up thunderstorms as well.  And remember, "When Thunder Roars... Stay Indoors!"  The good news.... winds will continue to decrease as we move through the week.  High temps will stay put in the mid 60s, just below our seasonal average of 68.

SATURDAY & SUNDAY: A quicker, weaker system will push through throwing more rain our way, but less wind.  Some spots inland and at the coast could see an additional 1/2" of rain in the bucket.  Great for keeping our air clean, but not so great for already saturated grounds. We may see the potential for hillside movement.  Highs over the weekend move from 64 Saturday to near 70 by Sunday.

*SEAHAWKS SUNDAY: All eyes on our 2-0 Hawks as they host the Cowboys at CenturyLink Field. Kick off set for 1:25pm on Q13 FOX.  Rain will start to back off a bit, but as of right now we're seeing showers, light in nature at kick off with shower chances decreasing through the game. 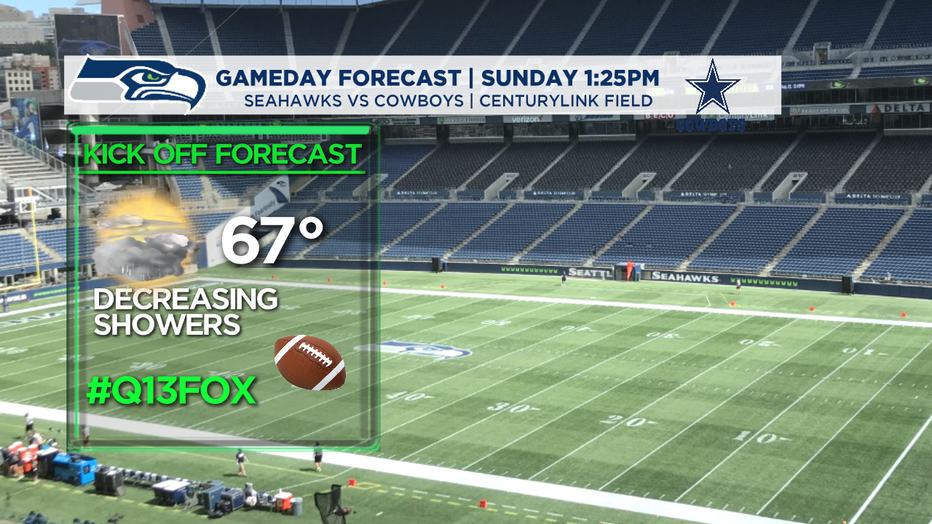 MONDAY: Some lingering showers, mainly at the coast and over the Olympics and Cascade mountains, but we wouldn't be surprised if some neighborhoods in the North Sound see rain through midday.  Highs will sit slightly above the norm, in the low 70s!

So, just to recap... we are not expecting major lowland flooding, but we will experience a pretty strong storm surge from the skies above delivering upwards of 2-4" of rain with the coast and Olympic mts. picking up the higher totals.  Lowlands could see up to 2" over a few days. Make sure to keep an eye on storm drains and gutters during this rain event.

Here's a look at our September rain so far by the numbers. 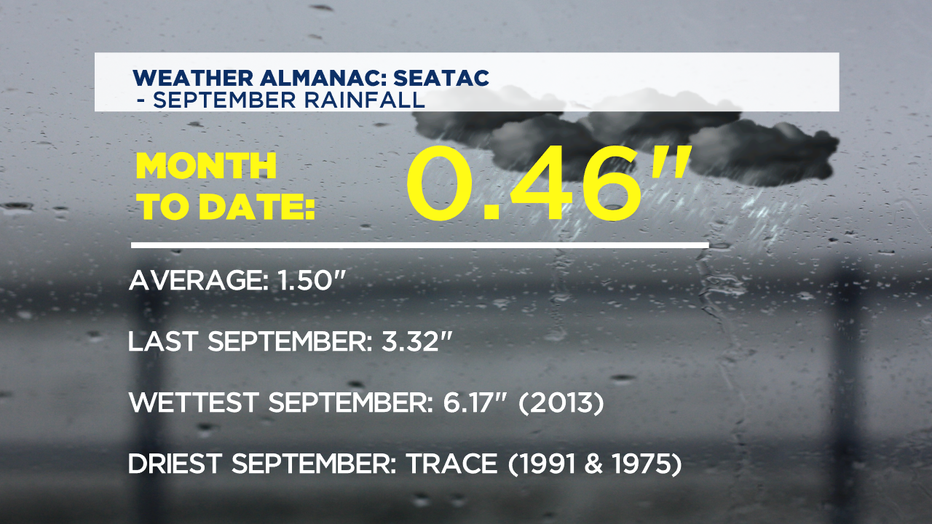 By the time we get through the end of the weekend, we should push past our average rain total for the month of September.  Stay tuned and stay dry! 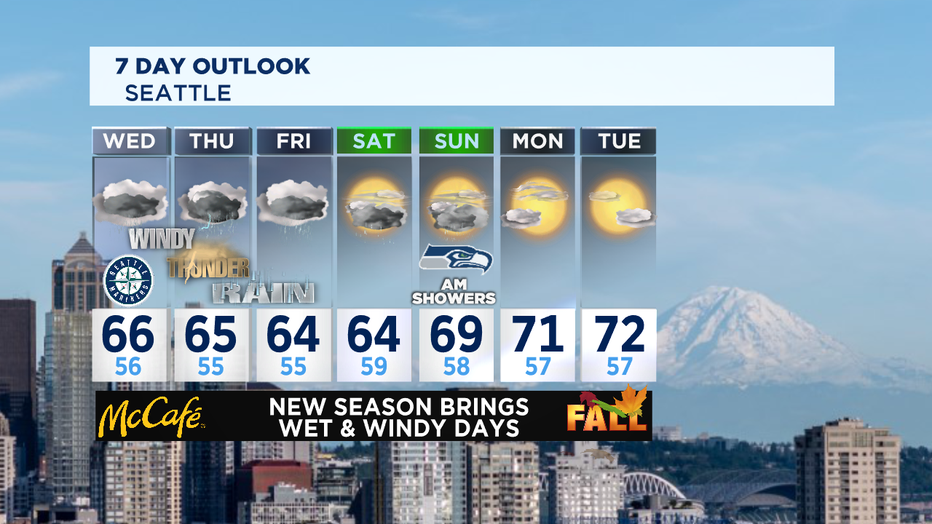