Spotty rain/snow mix for the weekend

Bust out the gloves, puffy coat and cozy socks! Western Washington is bracing for a frigid week. There could be lowland snow at times this week. However, no particular storm looks major. 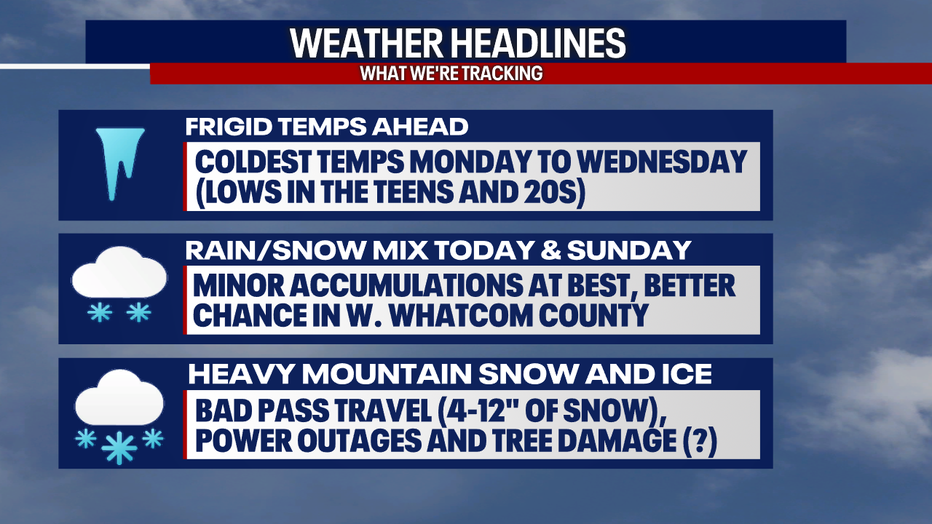 Earlier this morning, freezing fog developed across many neighborhoods in Puget Sound. Be on the lookout for icy spots on bridges, overpasses, sidewalks and driveways.

Highs today will be quite chilly, but not nearly as cold as what we've forecasting by Monday. Temperatures will only reach the upper 30s and low 40s. You can plan on cloudy, overcast skies. 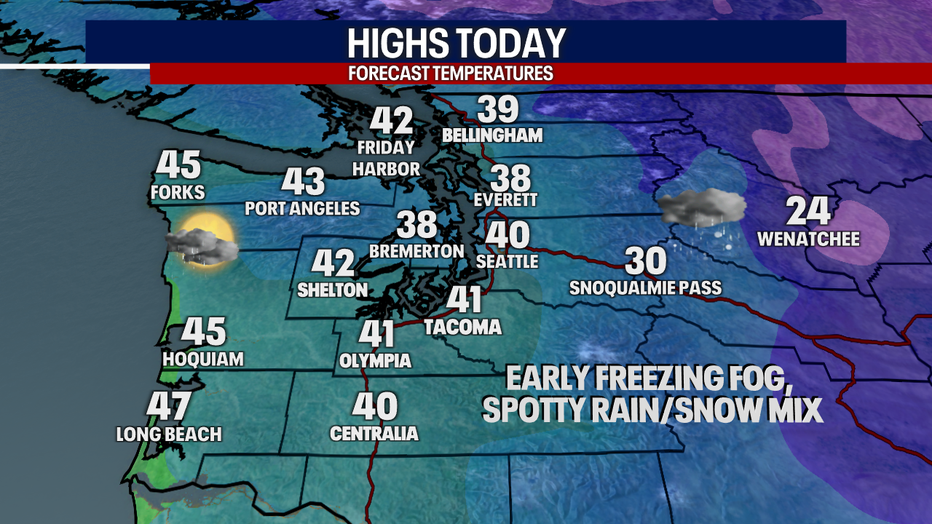 By 11:30 this morning, we got reports of a rain/snow mix across Puget Sound. Some communities like Snohomish even reported freezing drizzle. An isolated rain/snow mix remains in the forecast for the rest of this weekend. However, showers don't look widespread. Instead, any rain/snow will be more hit-or-miss. I think the North Sound (especially Snohomish County to the border) have a better chance for flurries. Light rain/snow could bubble up over the South Sound and other places this weekend too, but there's just a better chance for it up north and over the Cascades.

Here's a look at Futurecast: the biggest thing to note is that the precipitation won't be extensive. 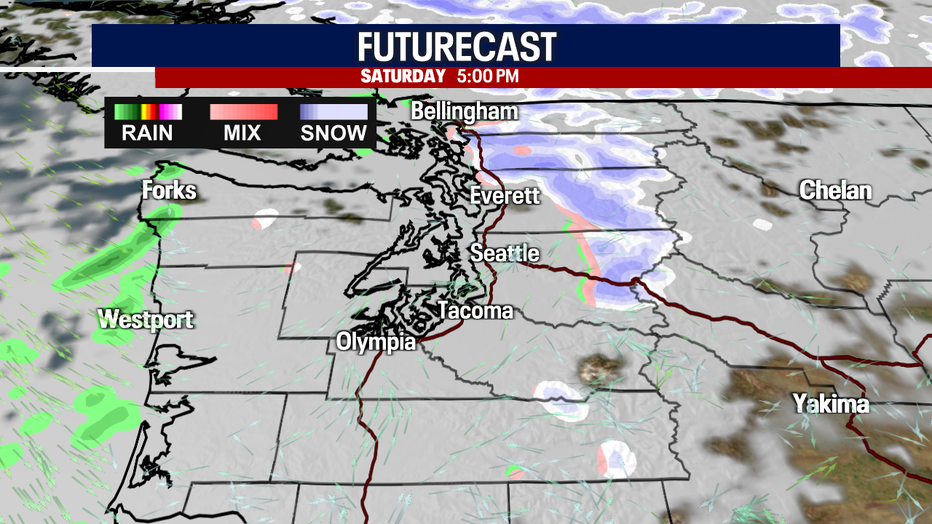 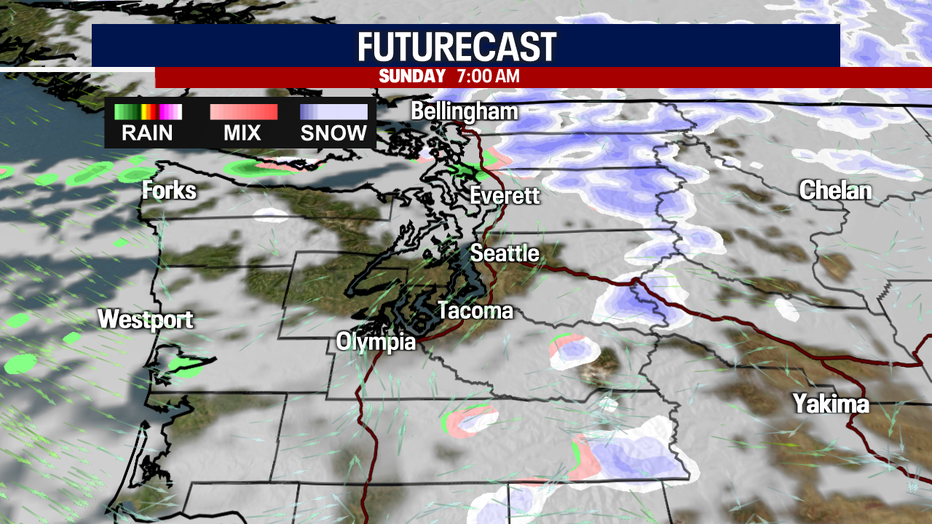 Any rain should transition to snow by Monday as highs stay at or below-freezing (frigid!). Even though temps will be cold enough Monday to support snow, there might not be a lot of moisture to work with. To give you an idea of the snow totals we could see between today and Monday, check out my forecast graphics below. Important things to remember as you look at the numbers: snow totals could be higher or lower than what we're currently forecasting. The timing, totals and impacts from this event are dependent upon the position of the weather systems. 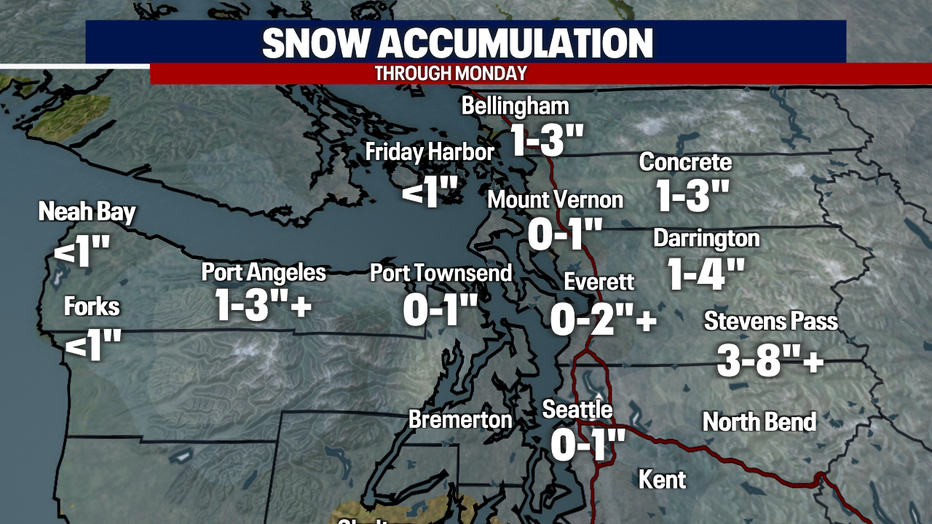 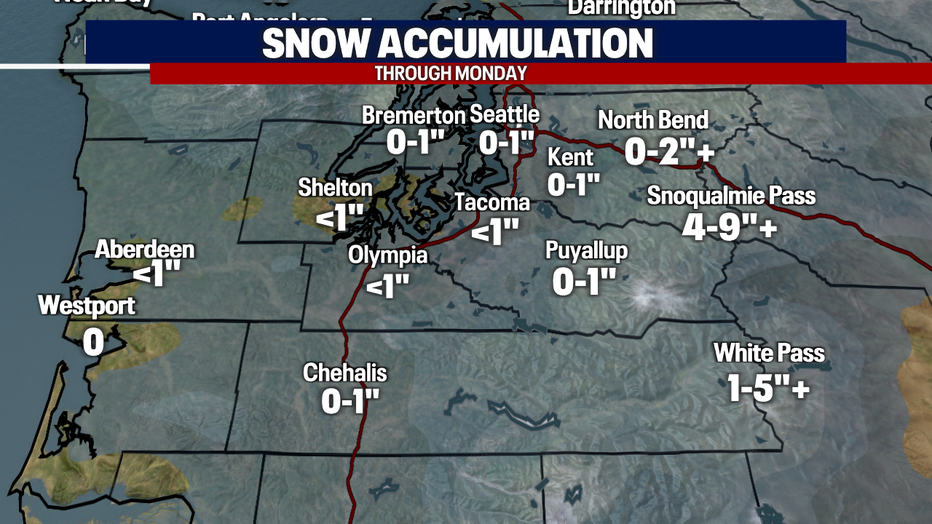 The National Weather Service has issued a Winter Weather Advisory for the Central Cascades. It's forecasting a layer of ice a quarter inch thick (in addition to the snow). Traveling over the passes tonight through Sunday evening could be very treacherous. White Pass will be safer than Stevens and Snoqualmie Passes.

There's also a Winter Weather Advisory from 4 p.m. today to 4 p.m. Sunday for Western Whatcom County. There could be a light glaze of ice, along with one to three inches of snow. Winds could gust to 45 mph. 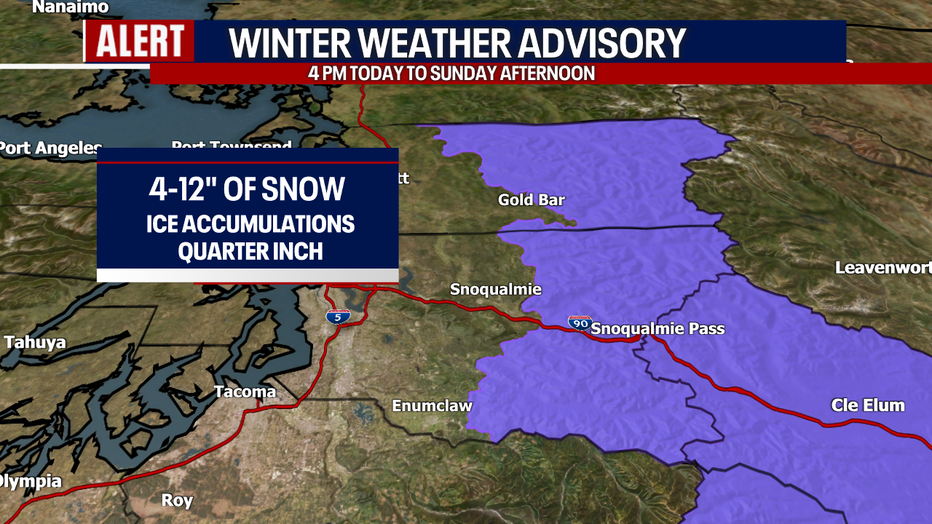 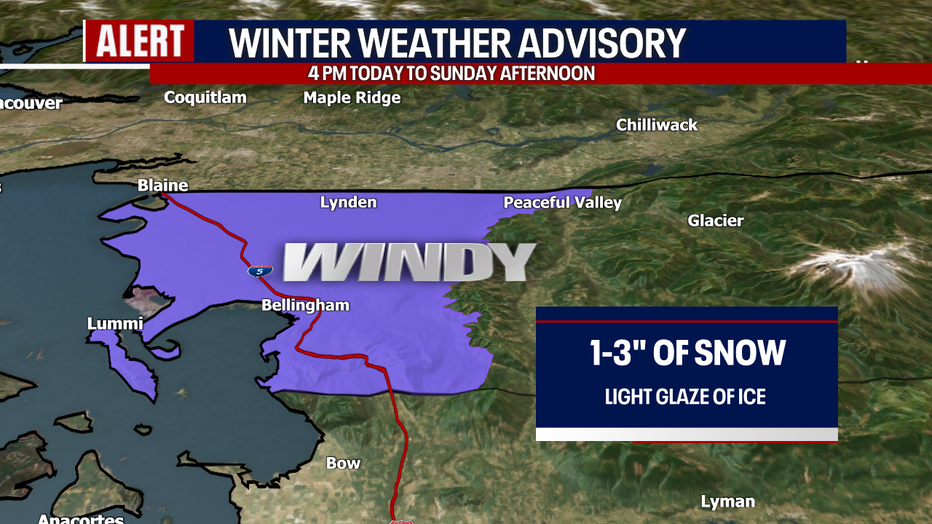 There may be a few other chances for at least a little lowland snow into Tuesday through Thursday, but there's still a lot of uncertainty about the coverage and impacts of any snow. Like I mentioned above, no particular storm at the moment looks to bring major, sweeping impacts to our region. However, there may be light snow accumulations at times in the lowlands. Temperatures are expected to warm up on Friday (just in time for Christmas that weekend!). 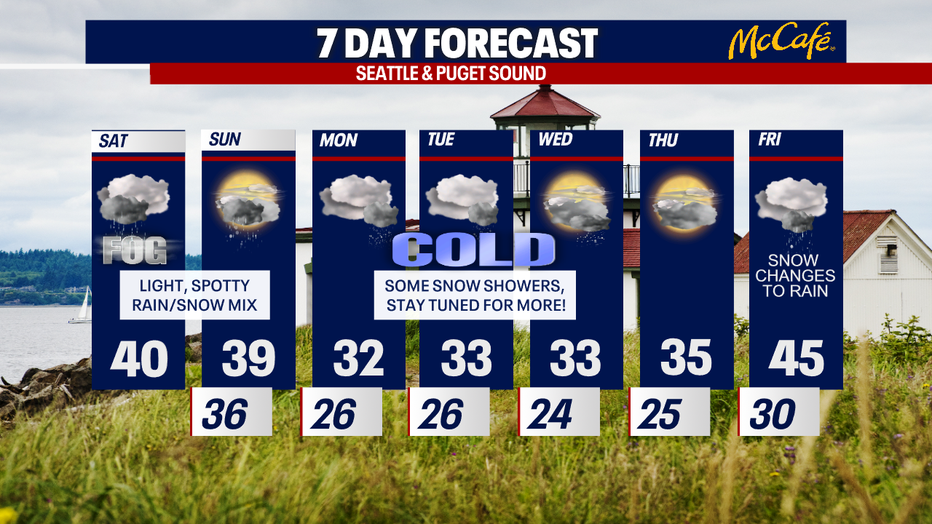