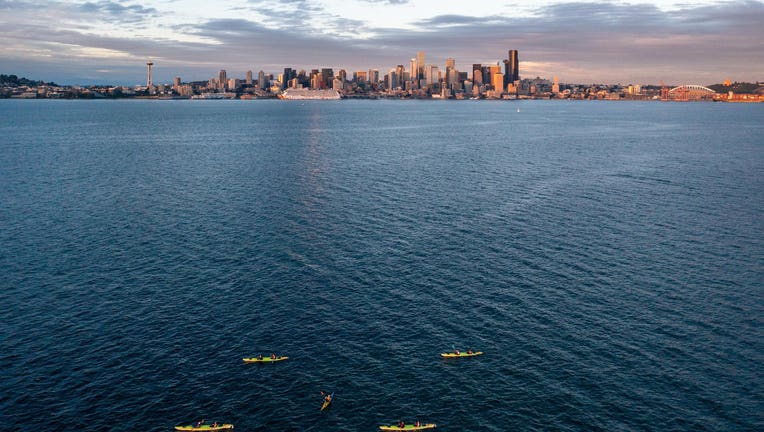 SEATTLE - The so-called "Dog Days of Summer" officially end on Wednesday if you go by the original definition, but someone might want to see if there's room to grant an extension in 2021 as another stretch of very hot weather looms for the Pacific Northwest this week.

Temperatures are expected to climb well into the 90s on Thursday and Friday with at least some potential for 100 degrees in spots around the Puget Sound area, especially on Friday.  Current projections put Seattle in the mid-upper 90s on Friday but there are some model runs that suggest the possibility of a revisit to triple digits.

Record highs in Seattle are in jeopardy on both Thursday and Friday. Thursday's record is 96 set in 1977, and Friday's is 92 degrees set in 2002.

It's important to note this won't be as hot as the deadly heat wave that swept across the Northwest and British Columbia in late June, but it will still be hot enough for heat-related impacts to be a factor.

Excessive Heat Watches are in effect for much of Western Washington starting on Wednesday and lasting into Saturday. In addition to the 90s (100s?) for highs, the humidity will be a moderate factor in making it feel even a few degrees hotter.

In addition, the humidity will work to keep it warmer at night, meaning temperatures will be slow to cool and may only briefly bottom out in the mid-upper 60s near daybreak before quickly heating again.

We're also watching to see if wildfire smoke could be yet another factor to add into the sultry period. As part of the heat wave, winds will shift to offshore directions Wednesday through the weekend, perhaps blowing in smoke from the interior back into Western Washington.

Any smoke could keep daytime temperatures down a few degrees by limiting sunlight, but would also keep temperatures warmer at night by preventing daytime heat from radiating back. And of course it could exacerbate air quality problems. It will bear watching.

We may see a little cooling on Saturday and then a better chance of cooling on Sunday as ocean breezes look to pick up a bit and hopefully not only cool us off but clear out any lingering smoke.

You might think with since mid-August is still a pretty hot time of the year, we'd still be steadfast within the "Dog Days of Summer" but if you want to go by the official definition, those end on Wednesday.

The constellation Canis Major contains a star called Sirius – also known as the "Dog Star" – and it's only visible in the Northern Hemisphere sky for 40 days each year between July 3 and Aug. 11, or the middle of summer.

It turns out that the ancient Egyptians thought unusually hot weather was directly related to the appearance of this Dog Star.

We now know this isn't true, but the ancient Egyptians believed the sun's energy combined with the energy from Sirius and resulted in excessively hot temperatures, according to Donegan.

The Dog Star is the brightest star in the sky (other than our own sun), though Sirius is 546,000 times farther from the Earth than the sun, so the amount of radiation we receive from it is has no effect on the planet's temperatures.