SEATTLE - Buckle up for more active weather! Today we're tracking the chance for isolated thunderstorms, hail and graupel – along with mountain snow. Early Monday, some communities in the South Sound could wake up to snow!

Yesterday was a wild day of weather: check out this shot of a hail shaft over Seattle (captured by the talented Tim Durkan). Once again today with any downpours that do develop, there could be hail or graupel. 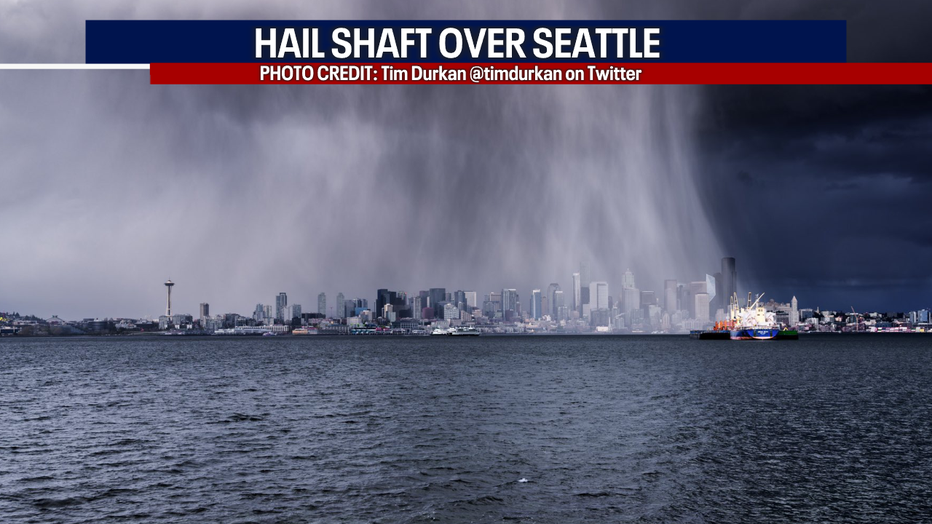 Below, you can see the difference between the precipitation types. If rain is coming down particularly heavy today, the atmosphere could cool enough for bursts of snow to mix with rain in the lowlands. Temperatures will be chilly today, only reaching for the mid to upper 40s! Bundle up. 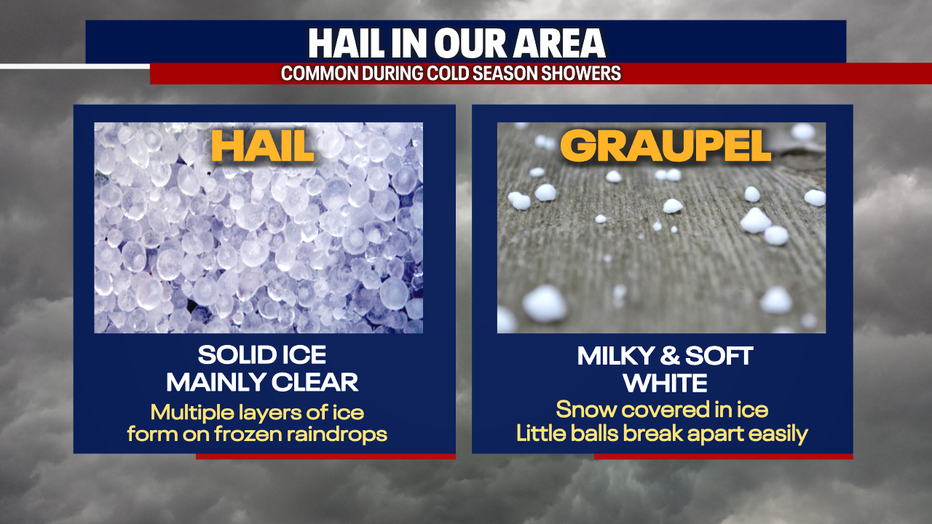 Mountain snow will be an issue today as well. Check out this Winter Weather Advisory in effect. 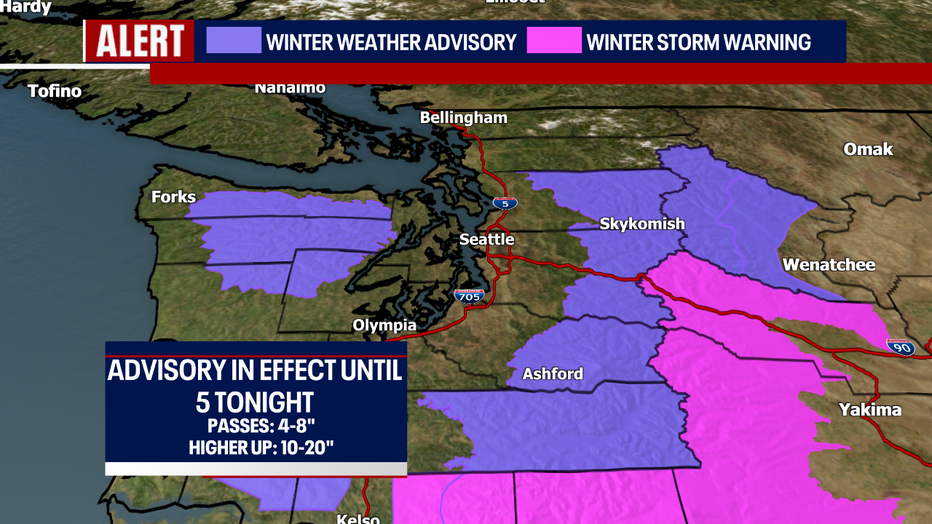 Late tonight to early Monday, another surge of moisture could sweep through Southwest Washington. Some of this precipitation could be snow. Keep in mind: this forecast is super challenging. The forecast models aren't entirely aligning on what to expect.

Communities south of Tacoma (perhaps even south of Olympia) have the best chance for seeing snow overnight and into early Monday. That isn't to say that communities farther north wouldn't see snow, but the chances are far less. Any snow will convert to rain by late Monday morning. Because highs on Monday will reach the upper 40s to low 50s, any snow on the ground in the lowlands should melt quickly.

If the snow pushes up to Olympia, there could be up to a trace to an inch of snow on the ground in the surrounding area. I think the snow could be quite heavy in the Southwest Interior and near the Oregon/Washington state line. Places like Chehalis, Centralia, Pe Ell, Cowlitz and Napavine could get as much as one to five inches of snow (even higher totals are possible if the snow is more intense or longer lasting than what we expect right now). Over the South Washington Coast, there could be a light accumulation, but there's a better chance the snow would melt.

One area we'll have to watch carefully: Port Angeles and Sequim. Northerly winds will be blowing towards those areas and that could give way to an "upsloping" effect. As the air meets the Olympic foothills, the air cools and condenses. Sometimes, this weather pattern can give Sequim and Port Angeles really impressive snow totals. If the upsloping happens, there may be a couple inches stacking up before melting. 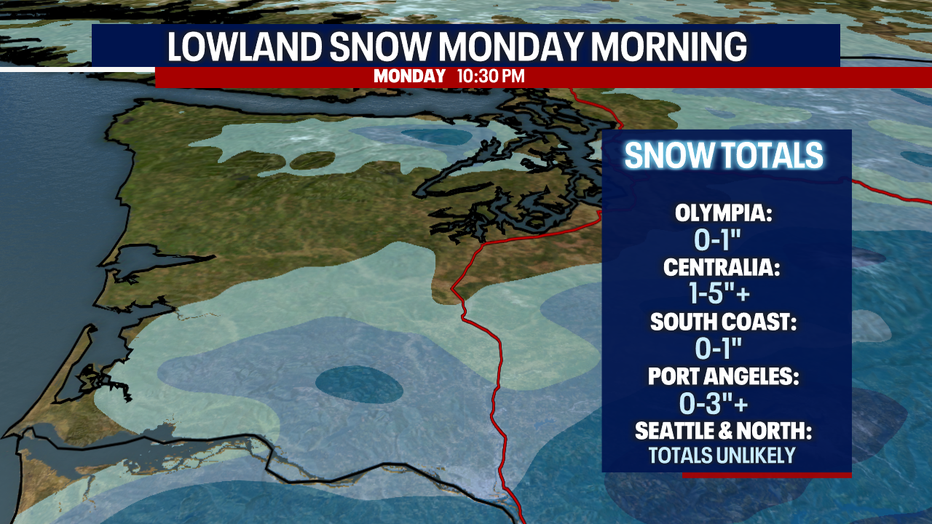 Important note: there is a lot of fluidity in this snow forecast. The coverage, impacts, timing and snow totals all depend on the track of this incoming storm system. If this low pushes farther north, more places could see snow and higher totals are possible. If this low digs farther south, fewer neighborhoods in Western Washington will get snow and there will be lower totals. 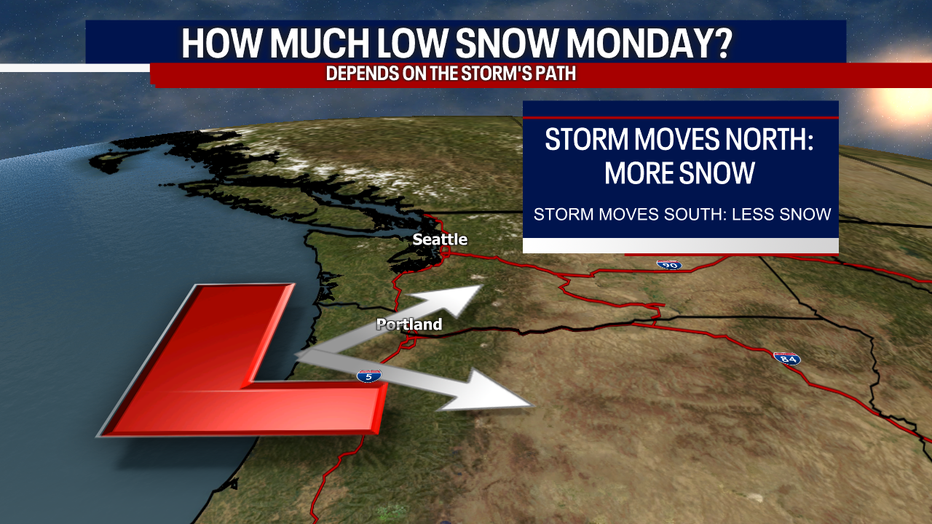 Here's a timeline of how everything could play out: 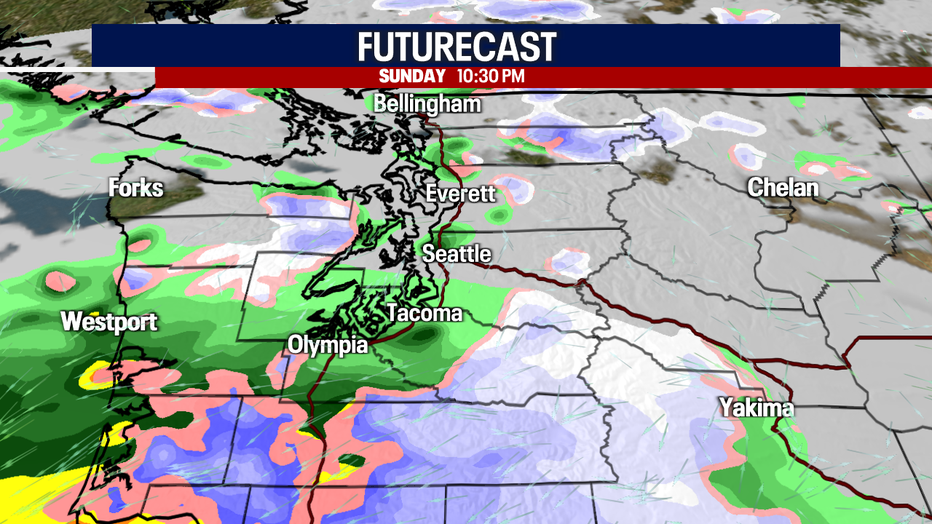 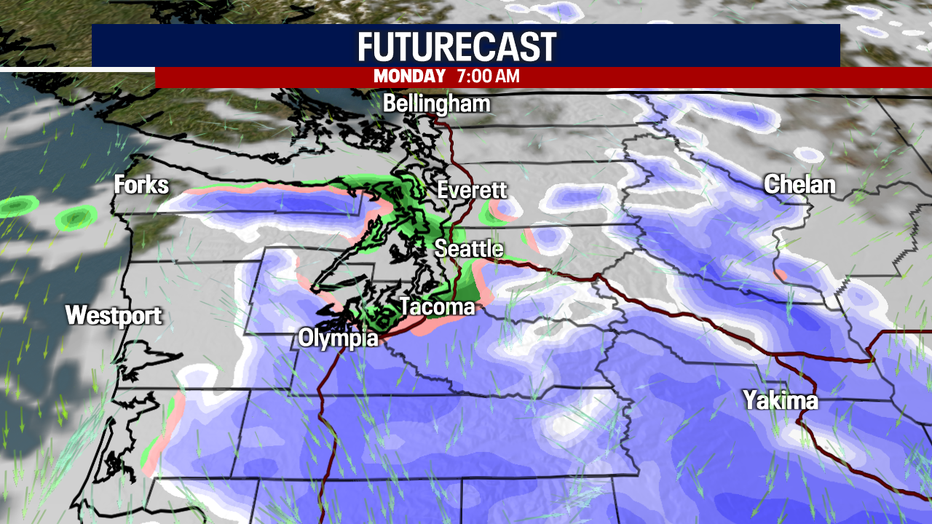 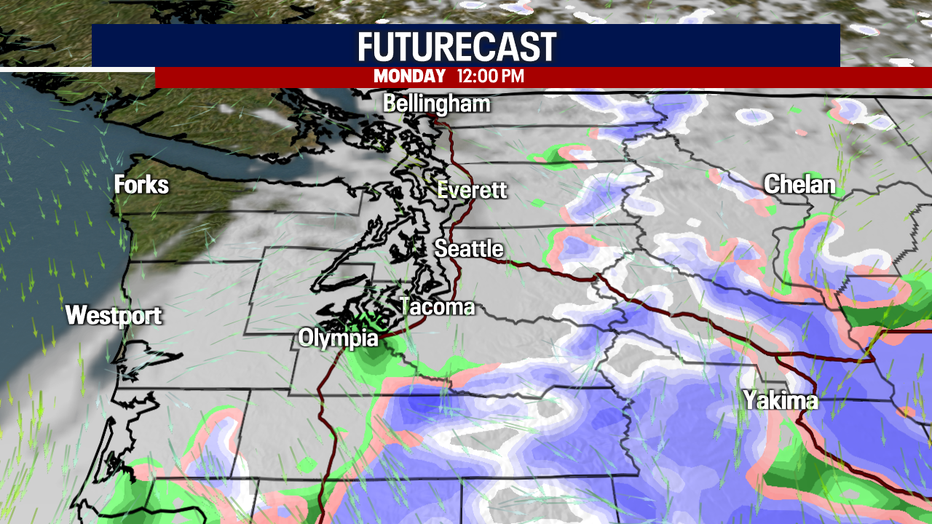 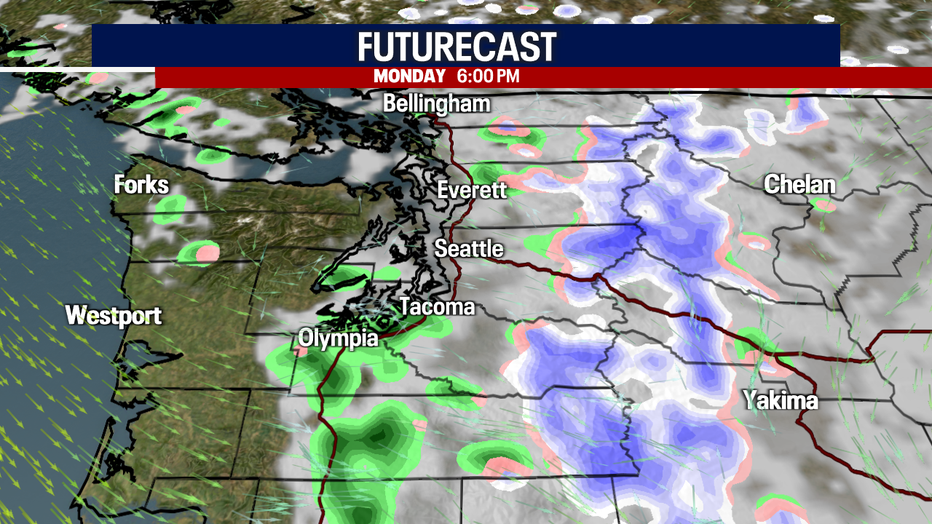 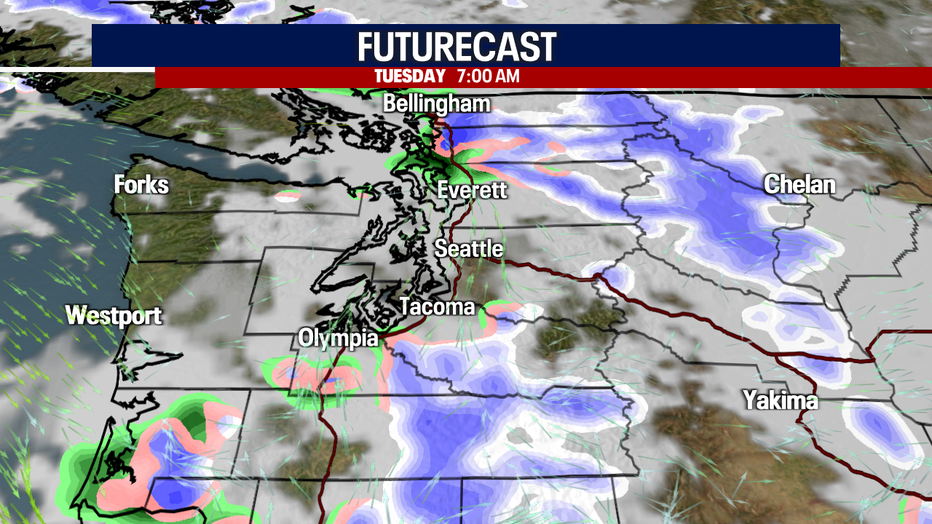 As if things weren't exciting enough this weekend in the weather department, Tuesday, Wednesday and Thursday mornings, there could be a brief and minor rain/snow mix in the lowlands. There probably won't be any accumulations because the showers will be isolated and short-lived. Of course, this forecast could change. Stay with us! 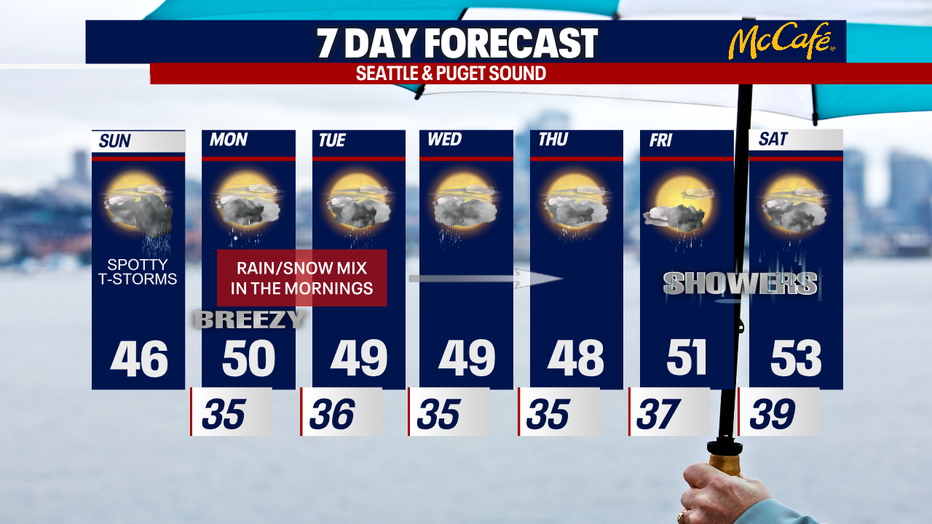 Stay tuned for more on this storm!