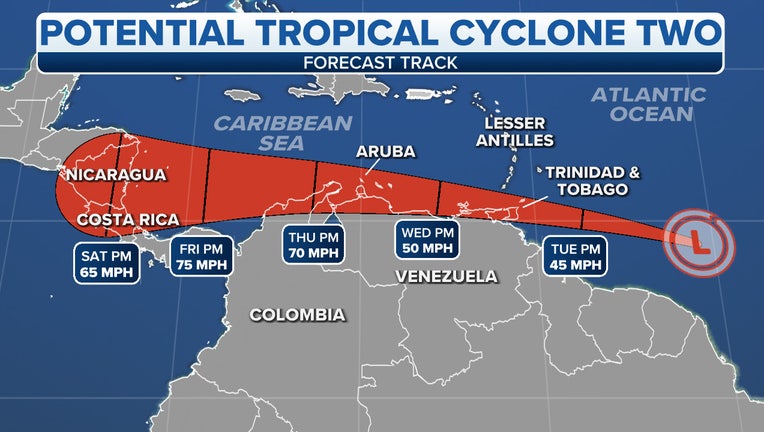 A tropical disturbance approaching the southernmost Caribbean islands is likely to become Tropical Storm Bonnie within the next couple of days, according to the National Hurricane Center.

The disturbance was designated Potential Tropical Cyclone 2 on Monday. The NHC uses that distinction for a developing system to allow the agency to issue alerts.

HOW TO WATCH FOX WEATHER ON YOUR TV

As of 5 p.m. Eastern, the system had 40 mph winds. It was located 720 miles east of Trinidad and was moving west-northwest at 18 mph.

A Tropical Storm Warning was issued for Trinidad and Tobago as well as Grenada and its dependencies. That means tropical storm conditions are expected in those locations within 36 hours.

WHAT IS A POTENTIAL TROPICAL CYCLONE?

The NHC forecast calls for PTC 2 to increase to a tropical storm by Wednesday morning, and remain at that strength as the storm skirts the northern coast of South America.

From there, the storm is forecast to move toward the southern Caribbean Sea and make a slight curve south where it is forecast to become a Category 1 hurricane by Friday. The forecast has the system making landfall in Central America on Saturday.

HURRICANE, TROPICAL STORM WATCH VS. WARNING: WHY IT’S IMPORTANT TO KNOW THE DIFFERENCE

There are two other tropical disturbances that forecasters are also watching. One is forecast to develop in the Gulf of Mexico just off the coast of Texas. The other is expected to develop in nearly the same area PTC 2 is located in now.