Wow! What a chilly day around the region.  Highs only climbing into the 60s for most. 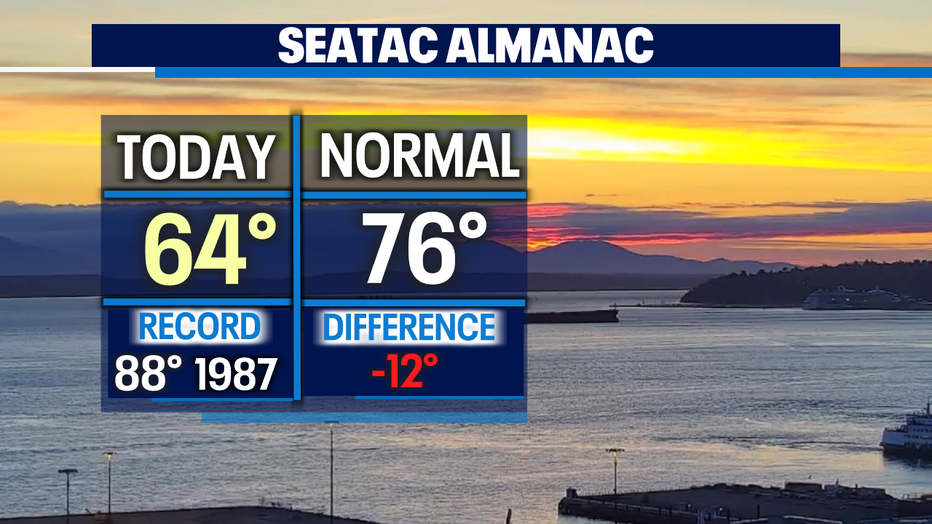 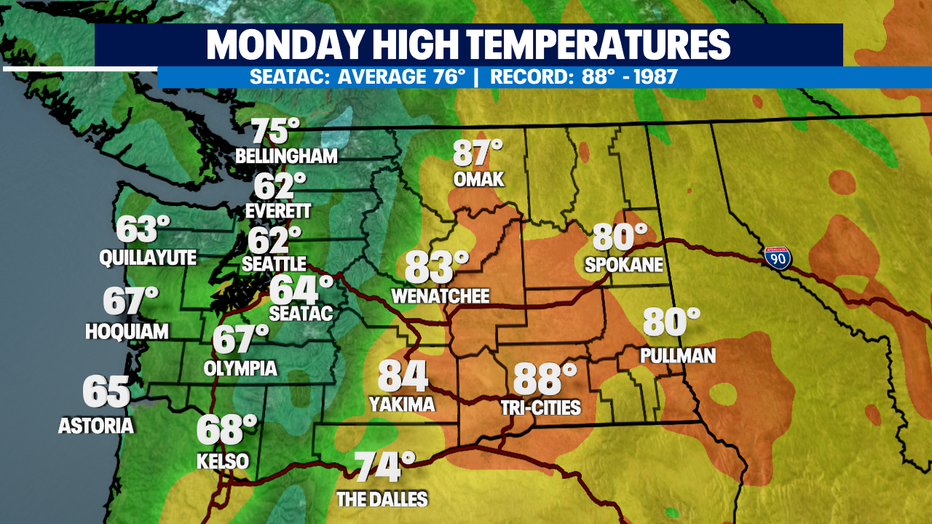 Tonight, temperatures will cool below our average of 56 degrees for this time of year.  Most spots will land in the mid 40s to low 50s. 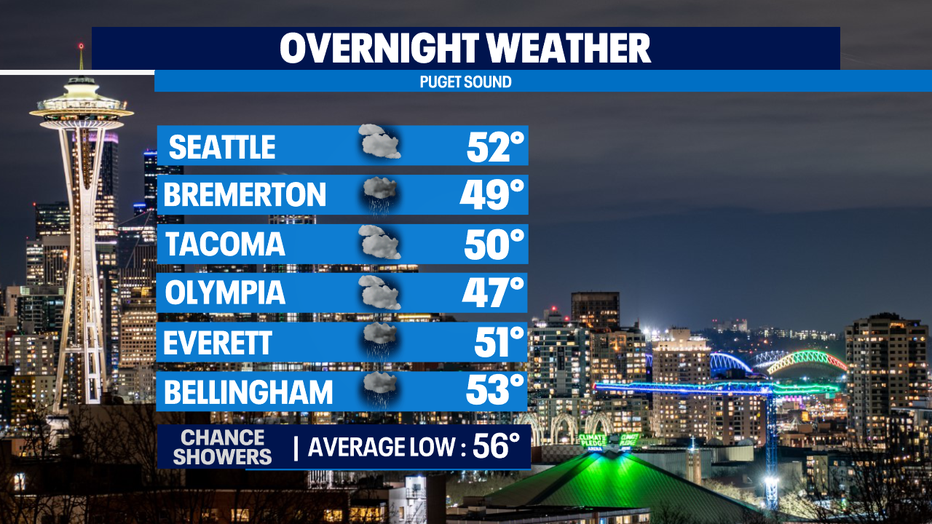 Our cooler and cloudier days will hang with us through mid-week as an upper level trough spreads Fall like conditions around Western WA.  By Wednesday into Thursday, we'll rebound nicely with a few days of warmer and drier weather.   But as we approach the weekend we're tracking a chance of more rain with an unsettled pattern heading our way. 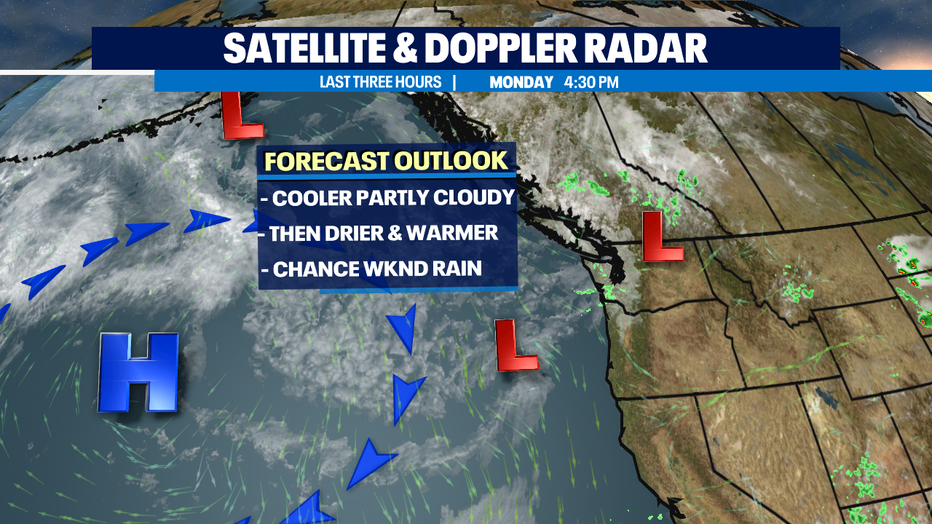 Here's a look at rain chances during the morning commute.  Most of the precipitation falls in the North Sound from Snohomish to Whatcom Counties. 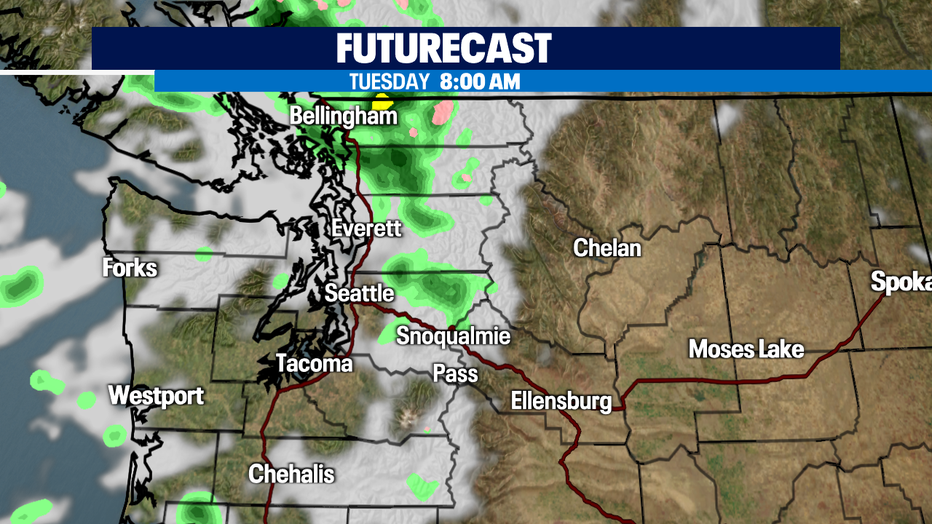 By late afternoon shower chances will become slim for most folks.  In fact, the evening commute should be very pleasant with partly cloudy skies. 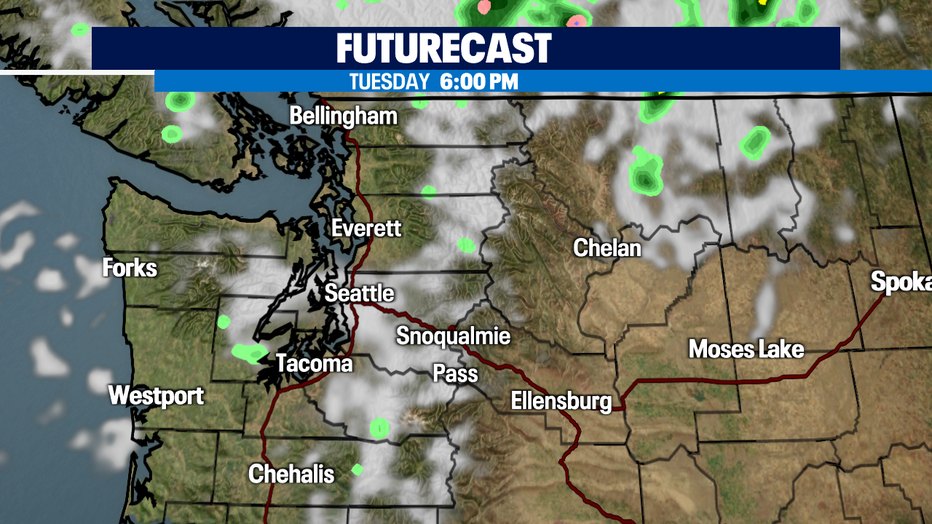 As we close out the month of August we're well behind on rain totals in the bucket at SeaTac.  As of 6pm Monday there's only 0.11" recoded at the airport.  The driest August on record happened in 2012 with only trace measured.  The wettest August on record was in 1975 with more than an inch and a half at 1.63". 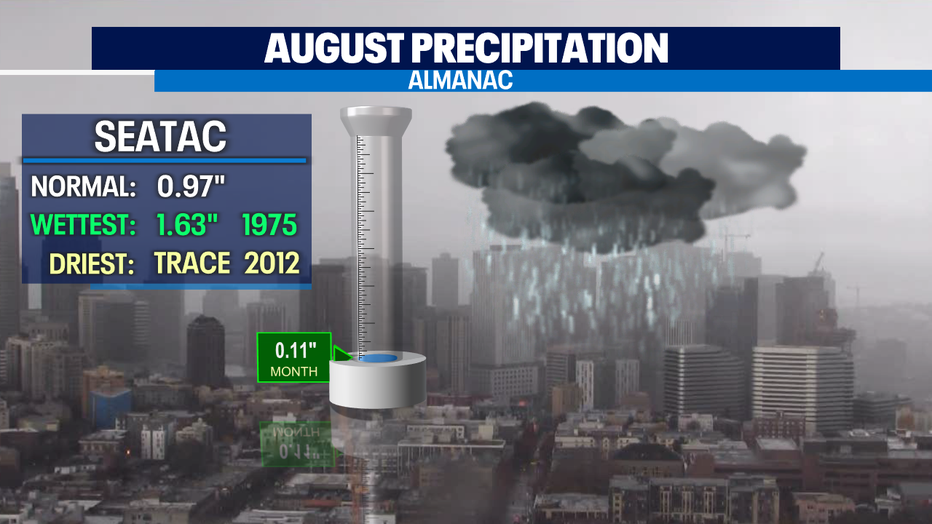 Checking in on Eastern WA we have an Air Quality Alert for the Lower Columbia Basin now.  We're seeing "Unhealthy for Sensitive Groups" to "Moderate" levels for communities near Yakima. 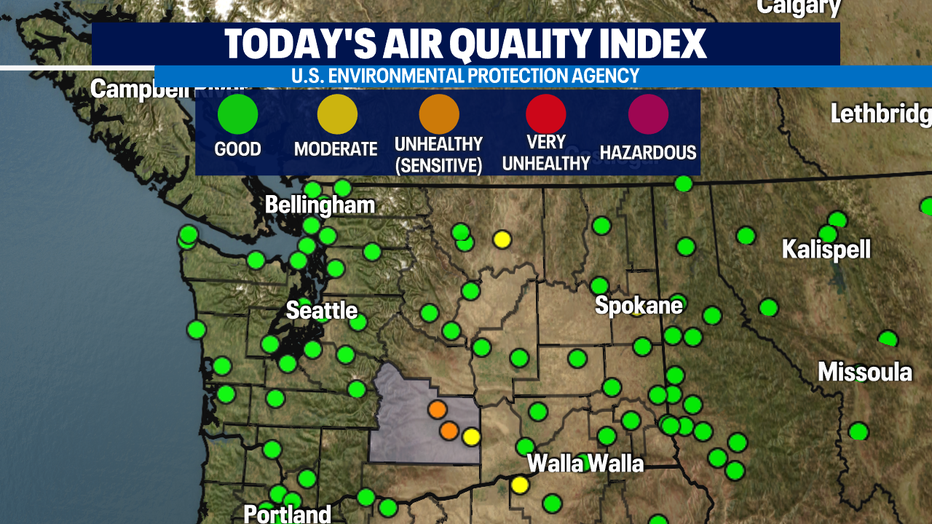 A few pockets of showers through Tuesday, before drying out and warming back up into the 70s.

Wednesday through Friday we'll see temperatures near normal in the mid to upper 70s with dry conditions.  Friday will be the warmest day of the week with some areas in the South Sound near or at 80!

By late Friday, our ridge starts to break down and that will open the door for a chance at unsettling weather over the weekend.  Yes, we're talking about a chance of rain on Saturday with showers lingering into Sunday.  We won't cool off too much though… hanging just below average in the low to mid 70s with clouds and sunbreaks over the area.

Have a great night all!  ~Erin Mayovsky, Q13 Forecaster 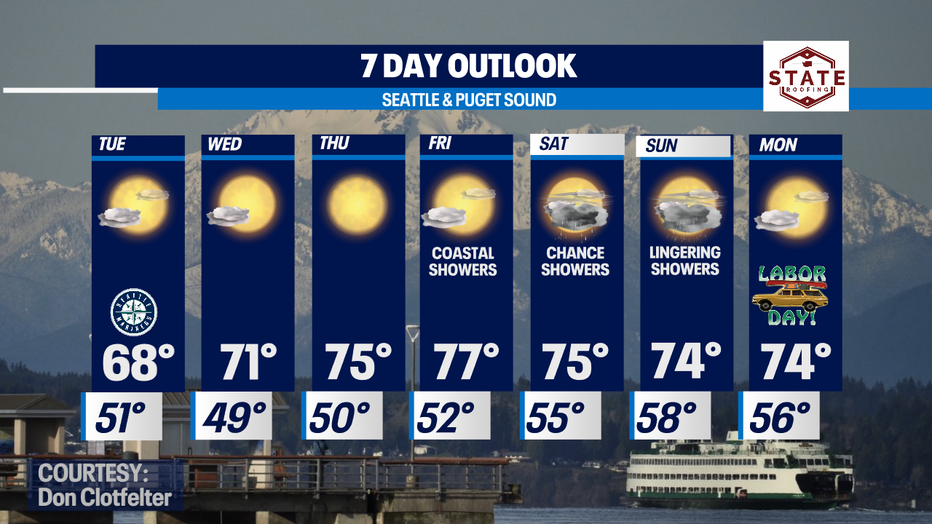 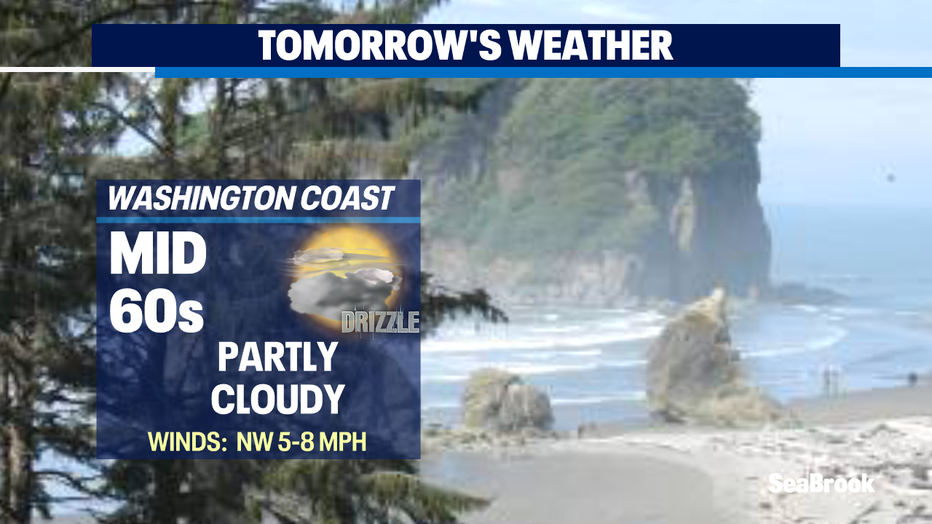 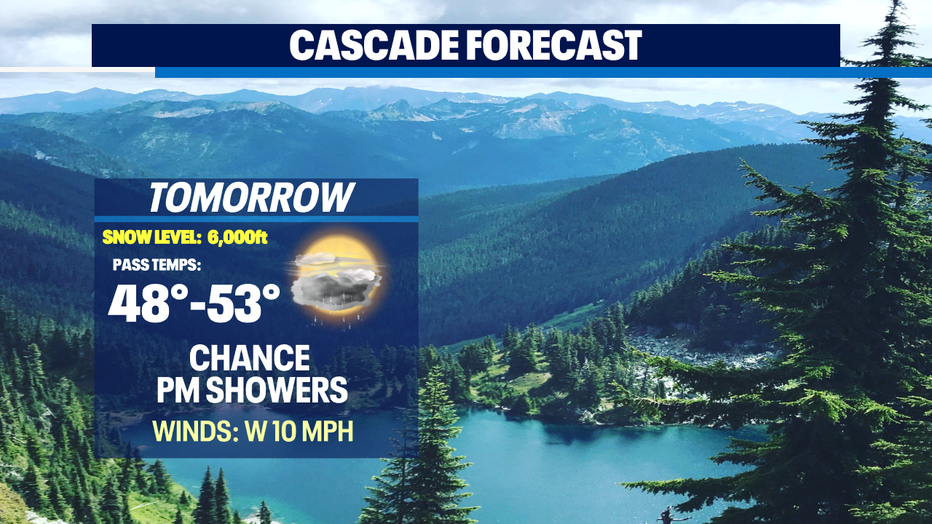 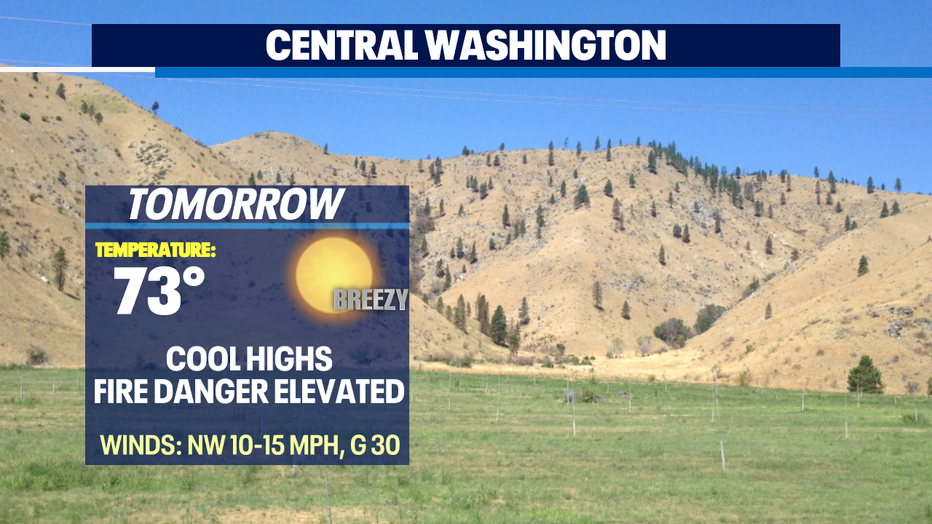 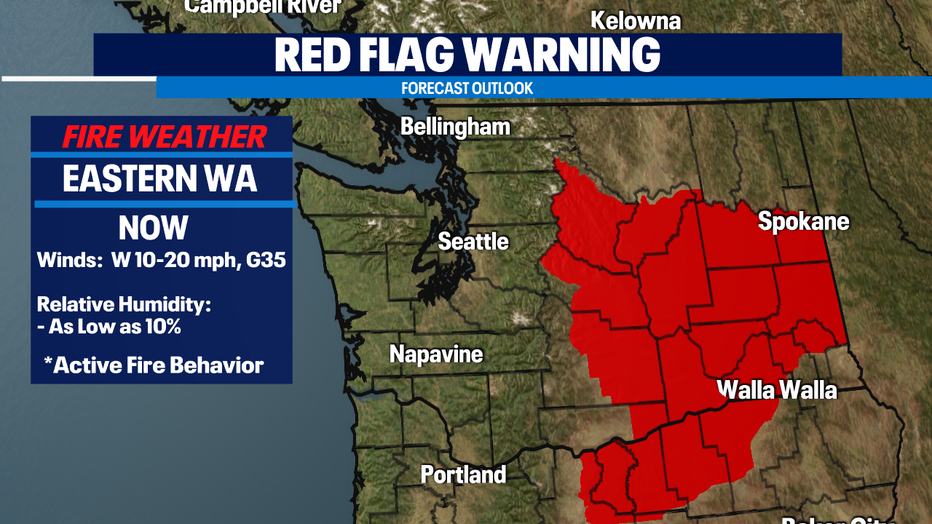 Ida is moving slowly through Northern Mississippi into Tennessee spreading a tremendous amount of rain and strong winds. After making landfall Sunday south of New Orleans as a strong Category 4 hurricane Ida is now a Tropical Depression.

Major damage around New Orleans will take days and weeks to access.  More than 1,000,000 people area without power, there are areas of extreme flooding and lots of damage to buildings. And even though Ida has slowed down and starting to relax many areas area under heavy rain and wind warnings with the potential threat of tornadoes for some.

Ida will move through several states, including Kentucky the Virginia's into New York before exiting out to the Atlantic. 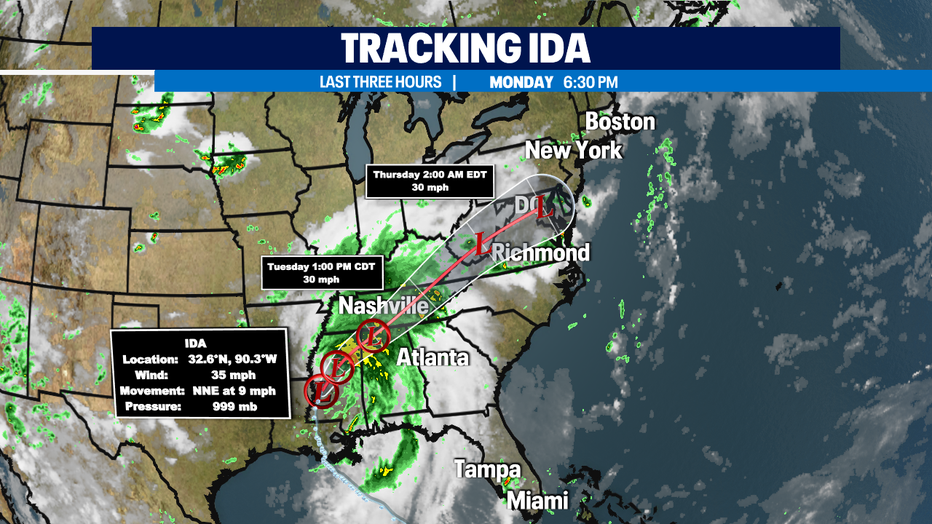