PORTLAND, Ore. - There is an old adage in the Pacific Northwest that it rains nine months of the year, which is not technically true, but mid-June is usually a time that's in the supposedly dry three months.

The strong atmospheric river of this magnitude taking aim at the Pacific Northwest will usually happen at times in the autumn and winter, they are nearly unheard of in June.

The term "atmospheric river" describes a narrow corridor of concentrated water vapor – usually from tropical origins – that is being carried by the jet stream, according to the Center for Western Weather and Water Extremes (CW3E). 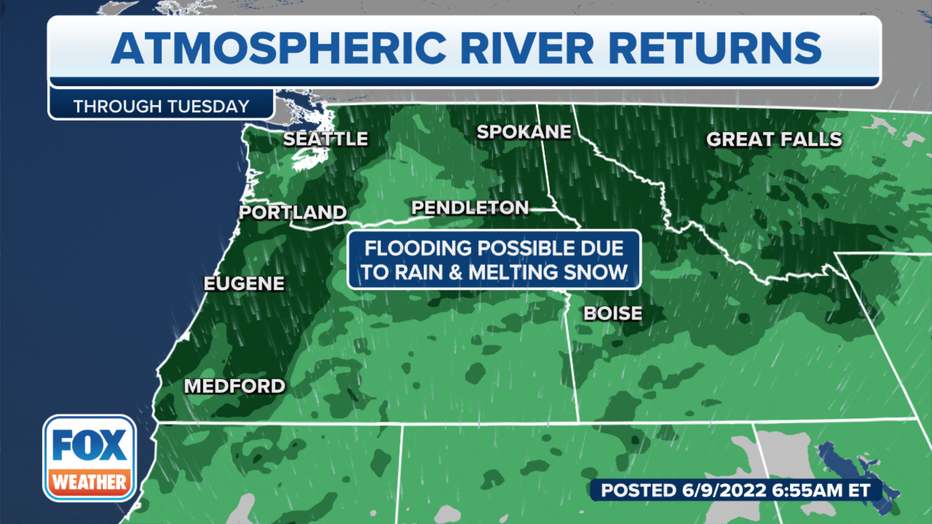 A strong atmospheric will bring the threat of flooding to the Pacific Northwest. (FOX Weather)

The water content carried along can be as much as 27 times the volume of the entire Mississippi River. And wherever those atmospheric rivers make landfall, you can expect a period of heavy rain and potential flooding, especially where that train of moisture slams into coastal mountain ranges.

Some computer forecast models predict the amount of moisture carried by the storm could be greater than anything observed between May 30 and June 20 over a 30-year period, according to the National Weather Service.

"This would be exceptionally late for an atmospheric river of this magnitude to impact our (forecast area)," said forecasters with the NWS office in Portland, Oregon.

The first and heaviest bout of rain lingers into Friday. After a brief break, more rain returns from Saturday into Sunday. 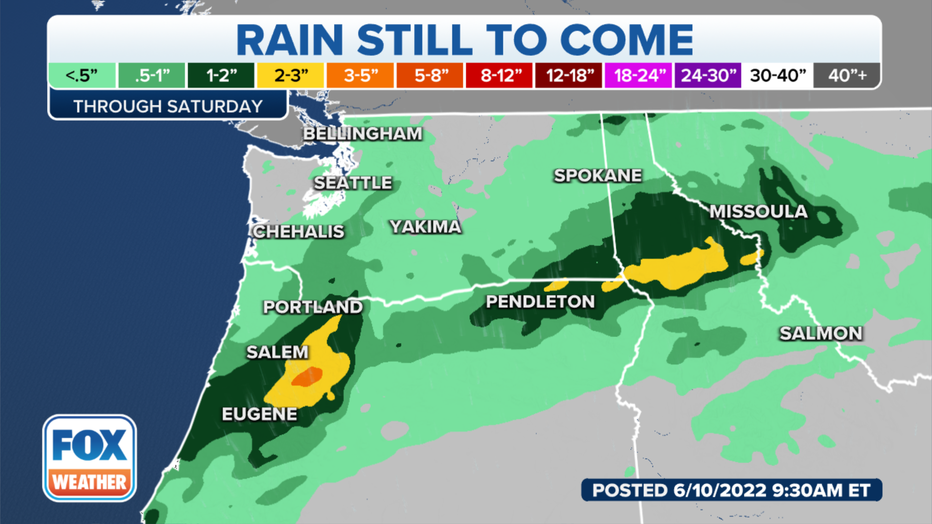 Predicted storm rainfall totals are between 2 and 5 inches in the Olympics and Cascades of Washington and northern Oregon, with more than an inch expected in the lowlands from Portland northward to the Canadian border. Those values nearly match the entire monthly rainfall average.

Heavy rain is expected in parts of eastern Washington and northern Idaho as well.

Snow levels are expected to be well above all mountain areas except the highest volcano peaks – around 11,000 feet – meaning not only will all precipitation fall as rain in the mountains instead of sticking as snow, but warmer temperatures will melt some unusually large snowpack for this late in the season, adding more water to run off. 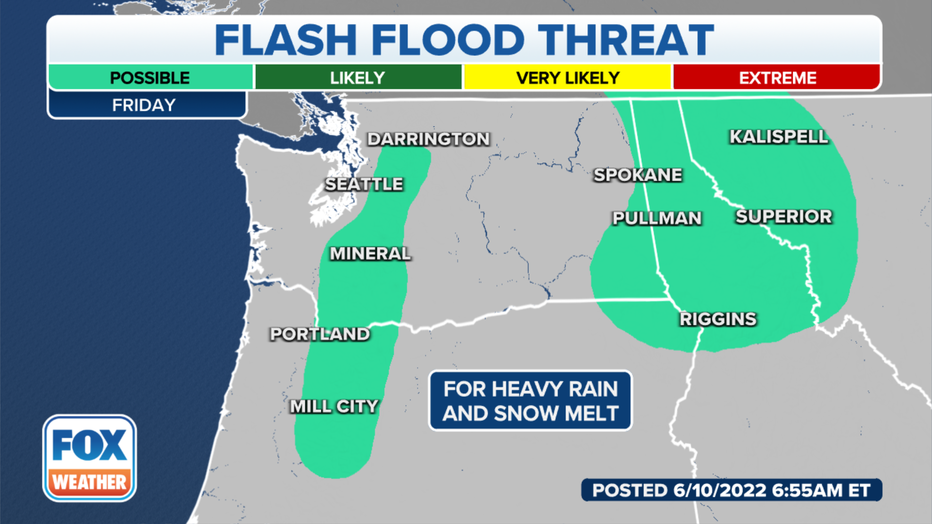 RELATED: Plan, prepare, protect: How to best cover your property against floods

But with rivers running just low enough that despite the soggy spring, river flooding is not expected, though rivers are going to be running higher than usual for mid-June.

There is a risk of isolated landslides with the ground saturated from the frequent rain events of the past two months.

That it will rain again this weekend is nothing new in 2022 for Pacific Northwesterners. This weekend will mark the 12th time Seattle has experienced measurable rain in the 15 weekends since March 1.

Seattle just finished its second-wettest and seventh-coolest May on record. Portland just had its eighth-wettest spring. The long-range forecasts for the next two weeks show continued unsettled weather for the Northwest, with a high likelihood of above-average precipitation and below-average temperatures.