We've had spots of freezing temperatures, and spots of rainfall -- now we're getting a week of both! FOX 13 Meteorologist Abby Acone has the details.

SEATTLE - Dress in warm layers this week – a cold front is sweeping through Western Washington today. Today's weather maker is a "modified arctic air mass." This chilly air originates in the Arctic, but it warms up slightly as it moves south. Still, these temperatures are quite frigid by our local standards. 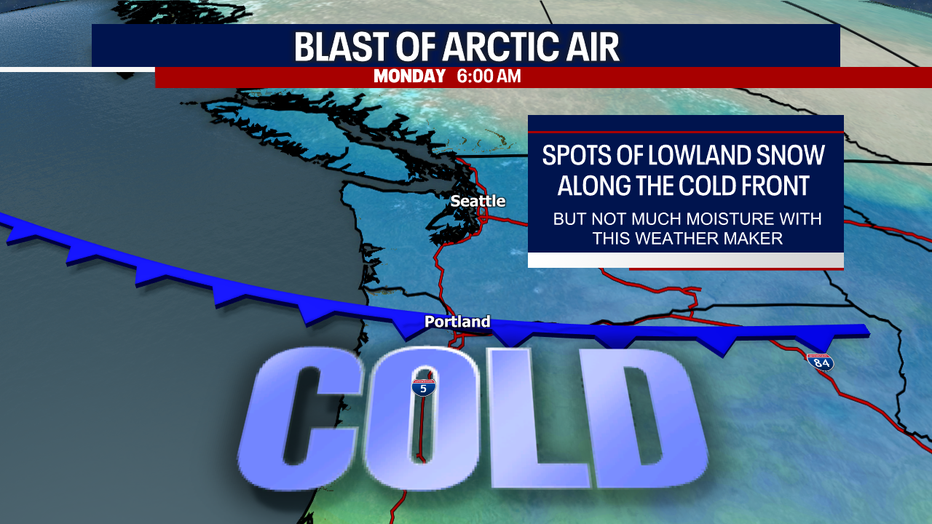 Already today, snow has been piling up over the Cascade passes. Lowland snow started in Western Whatcom County and is slowly moving south. As the cold front races south throughout the day, a rain/snow mix is expected across the lowlands of Western Washington. Keep in mind, any lowland snow or sleet will be very hit-or-miss. This isn't going to be a widespread, major lowland snow event. In fact, there isn't a lot of moisture associated with this incoming cold front.

Otherwise, you can plan on cool temps, occasional showers today and sunbreaks amidst the clouds. Some communities may just see a chilly rain vs snow (this could especially be the case in the South Sound). 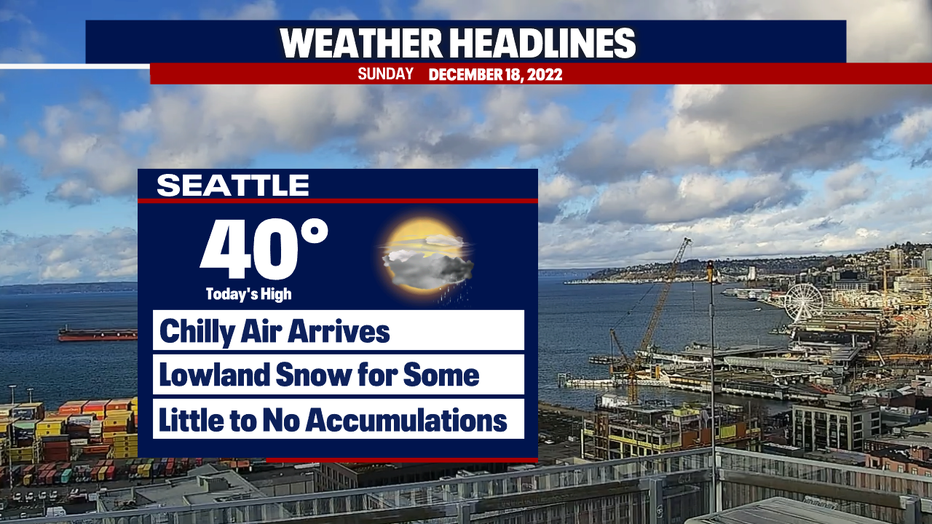 For the most part, any lowland snow wraps up late tonight. Even though the atmosphere settles down overnight, temperatures remain frozen. Ice and snowy roads could be an issue all day Monday. 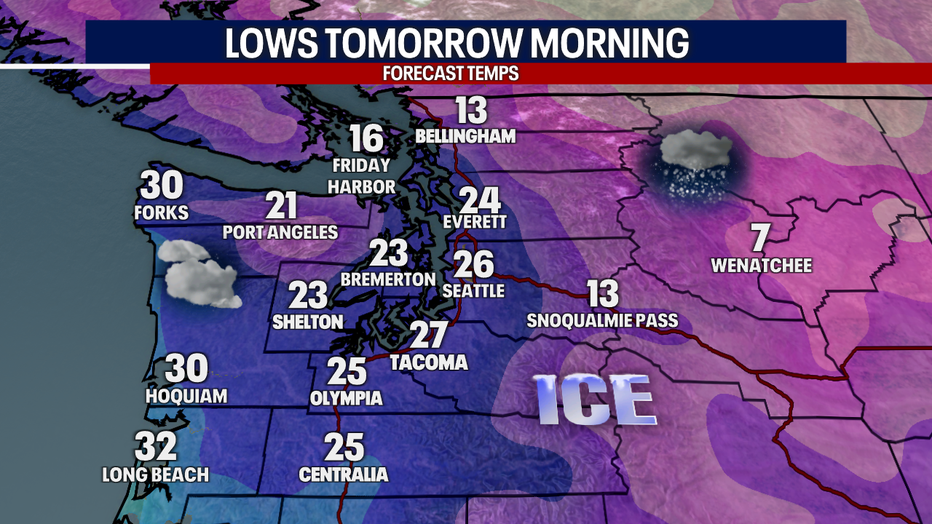 Any snow accumulations in the lowlands look rather unimpressive and minimal. Under steady, heavy bands, there could be upwards of one to two inches sticking to the ground, but most accumulations would amount to under an inch. 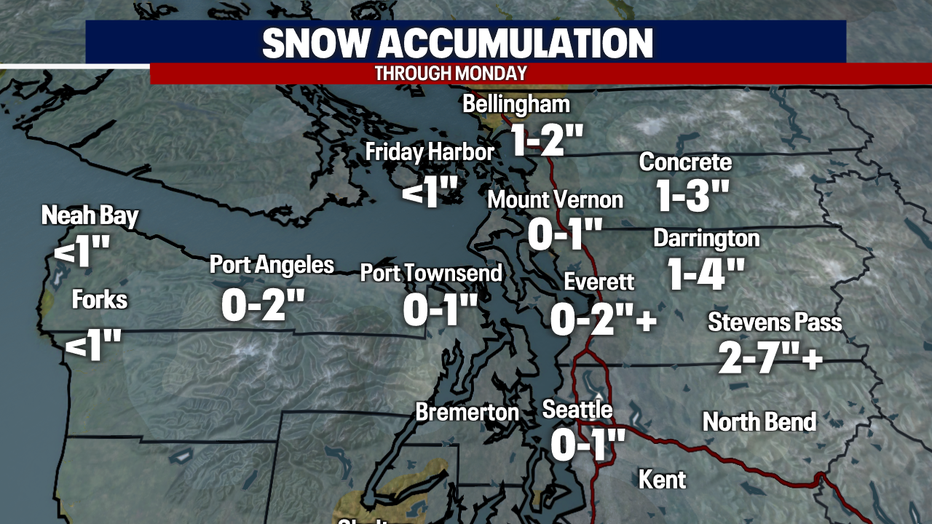 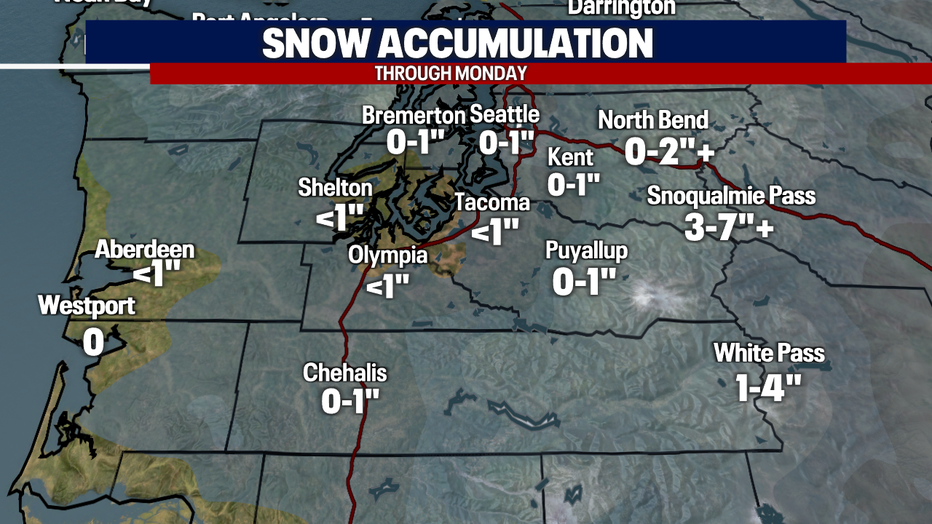 An extra two to seven inches could stack up over Stevens and Snoqualmie Passes by tonight. After a lull in the activity Monday morning, some snow could return to the Cascades by the afternoon and evening. 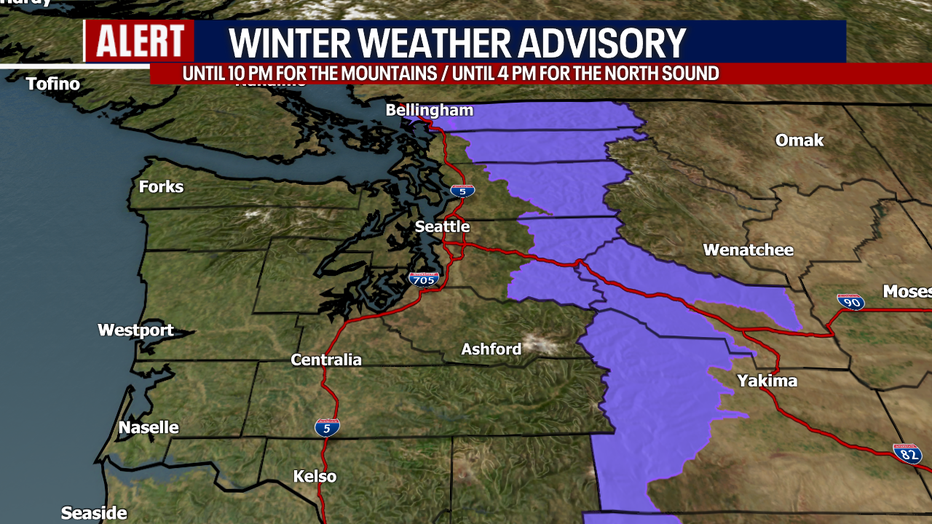 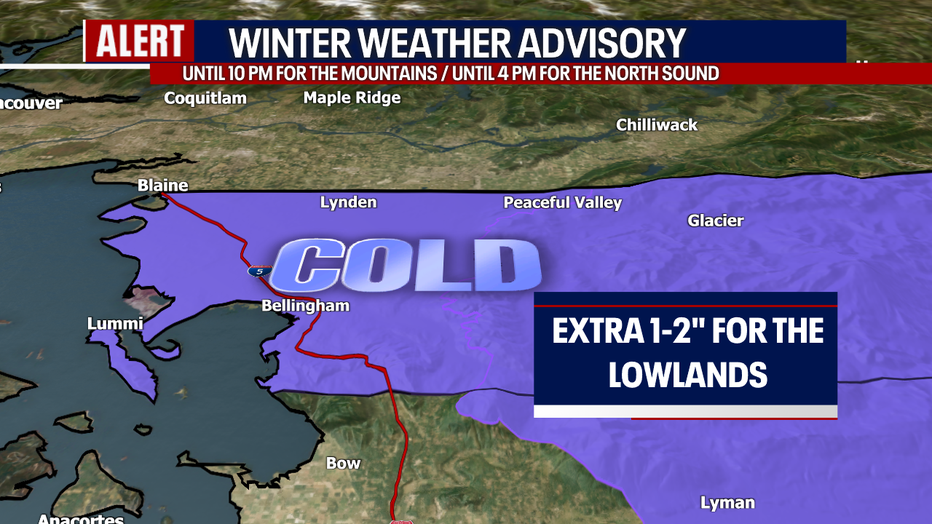 Speaking of Western Whatcom County, a Wind Chill Advisory is posted from 7 p.m. tonight to 10 a.m. tomorrow. Wind chills could be as cold as ten below freezing. Bundle up and try to limit your time outside! 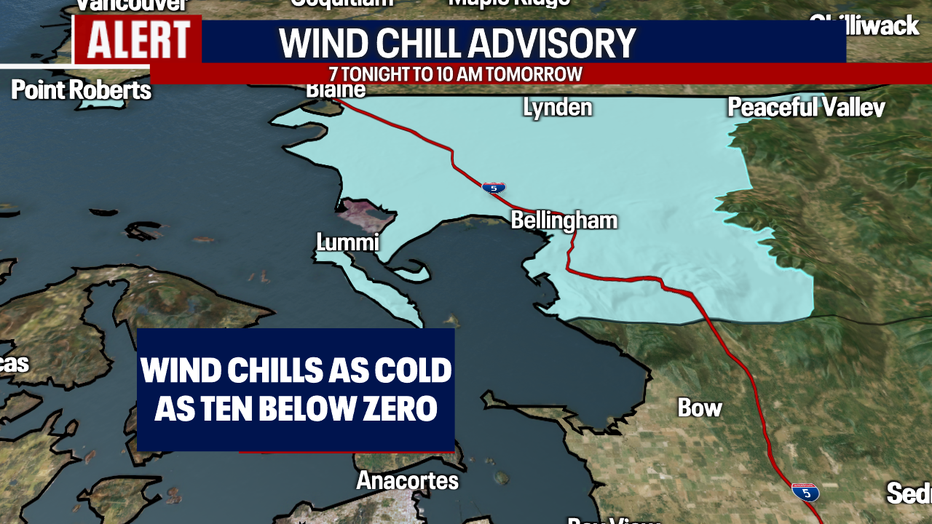 Tuesday is our next chance for accumulating snow in the lowlands (primarily in the North Sound). However, there's still a lot of uncertainty about the type of precipitation we'll see on Tuesday, along with question marks about the impacts, timing and totals. Stick with us for more information! 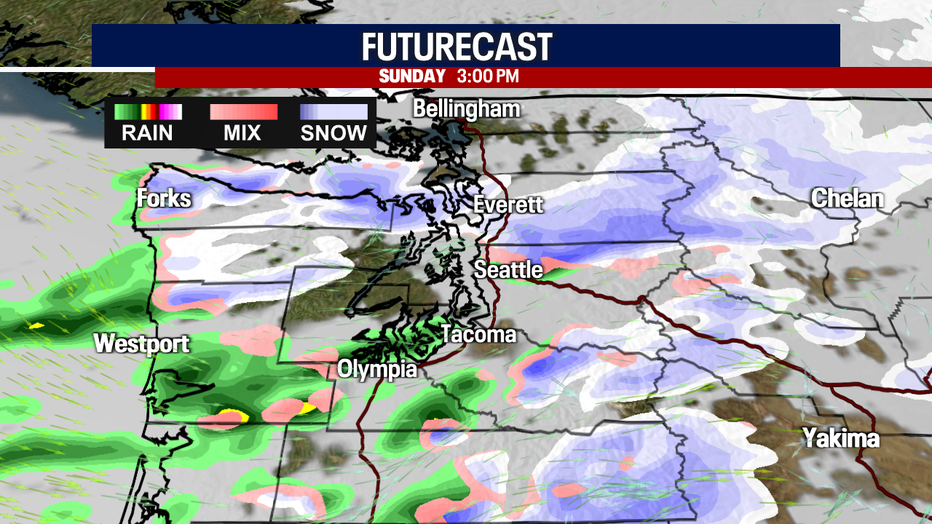 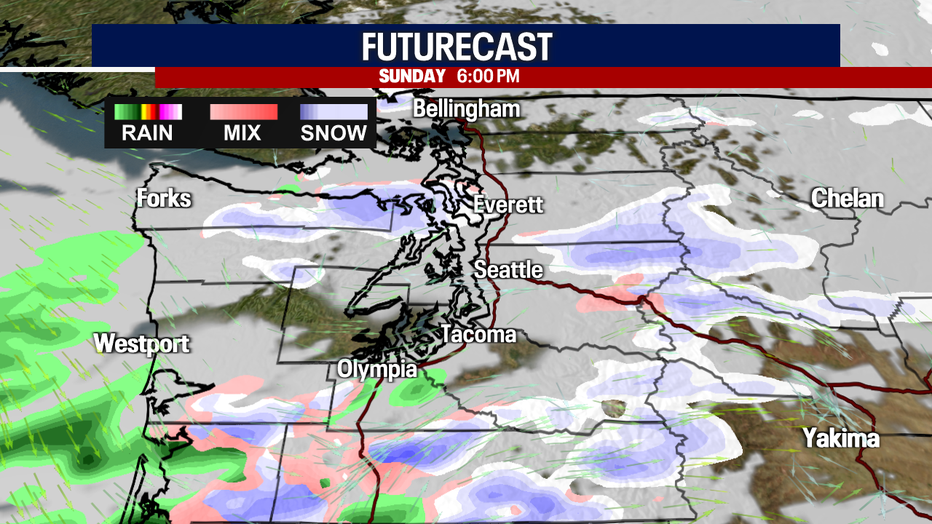 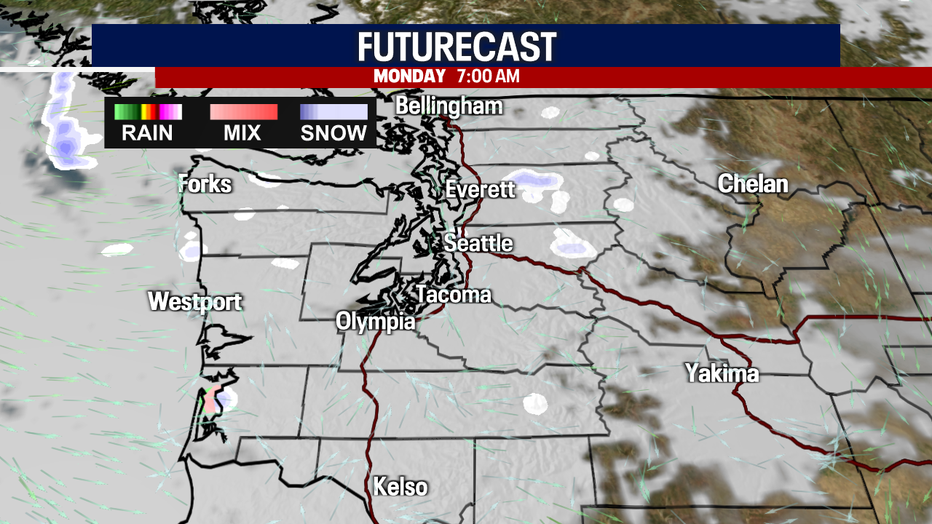 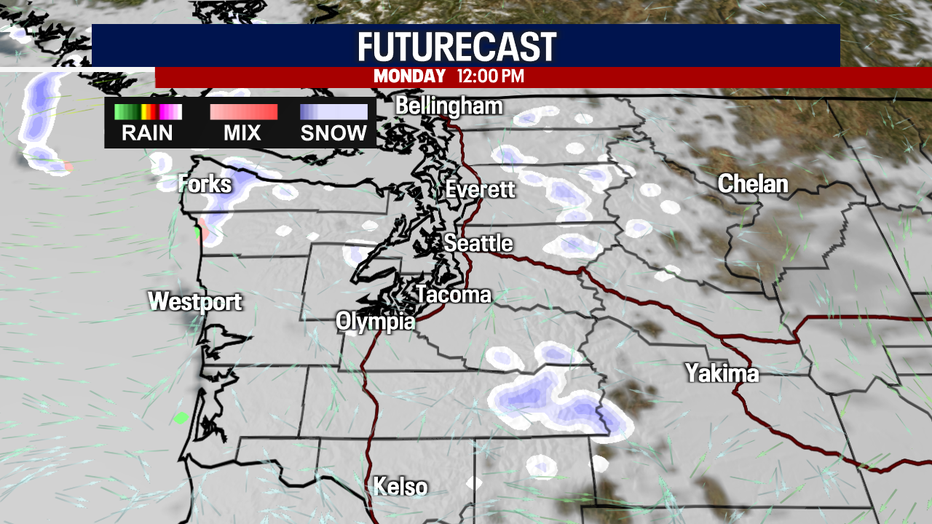 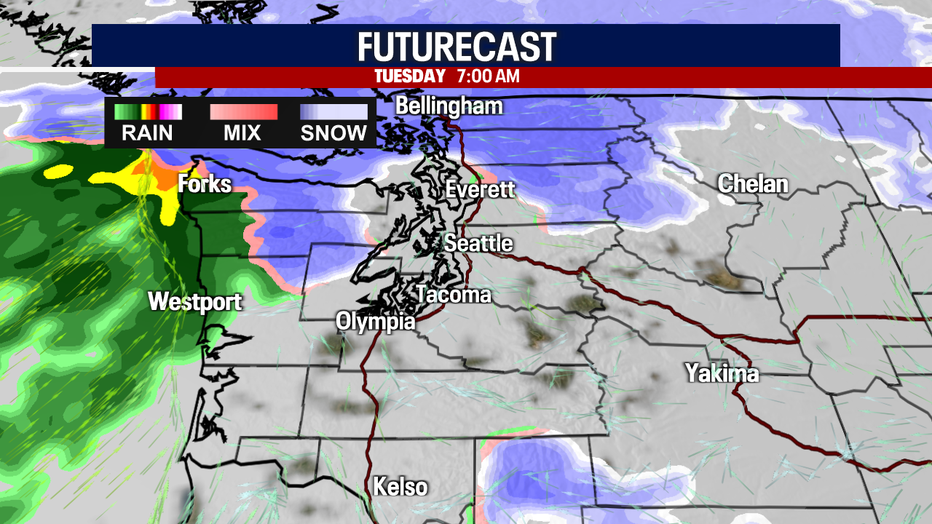 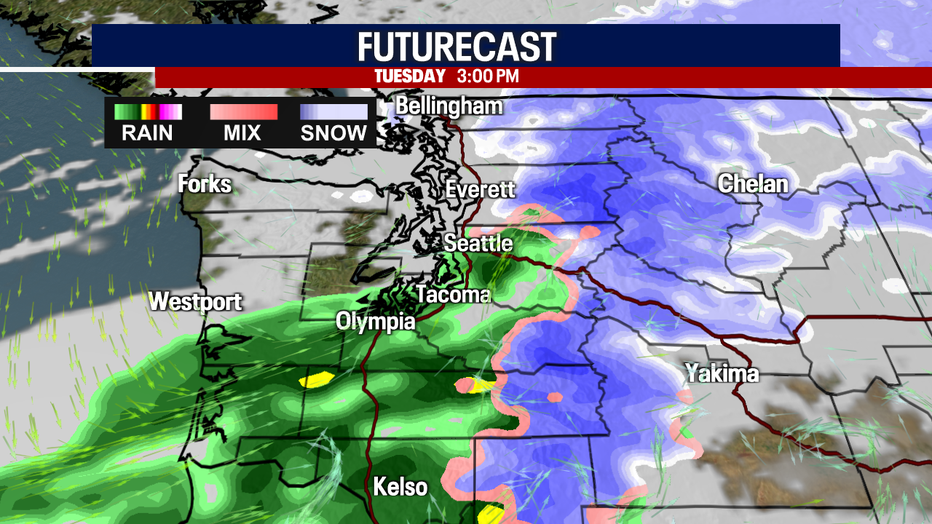 Wednesday could wind up mostly dry. Showers are possible on Thursday. Any snow would transition to rain on Friday as temperatures are forecast to warm. Saturday (Christmas Eve) looks slightly wet and cloudy. We'll bring you updates on the holiday forecast throughout the week! 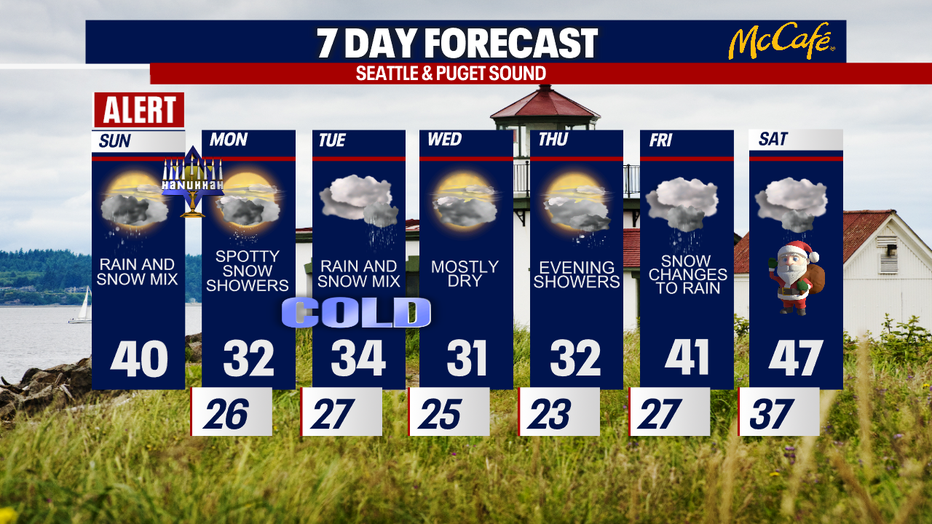