Q13 Weather Anchor Erin Mayovsky forecasts more cool tempers with rain in the near future, relief to wildfire smoke in the state.

SEATTLE - Smoke, haze and fog continue to plague our usually beautiful Northwest skies for this time of year.

You wouldn't know it is still summer by the looks of our gray atmosphere.  As we close out the last full week of summer we will see limited blue high above, but instead more polluted air.  Our AQI today not great with most of us around Western WA between unhealthy to hazardous levels.  (150-325 Index rating) While everyone wants to spend more time outdoors, these kinds of numbers make it extremely difficult to do so.  Please limit your time outside.  There is hope in sight as a disturbance sits offshore taking its own sweet time moving inland to help clear us out this weekend.

Here's how we looked today with air quality and temperatures. Highs were able to warm above normal for most as we saw some smoke lift this afternoon.  Most areas certainly felt very muggy for sure. 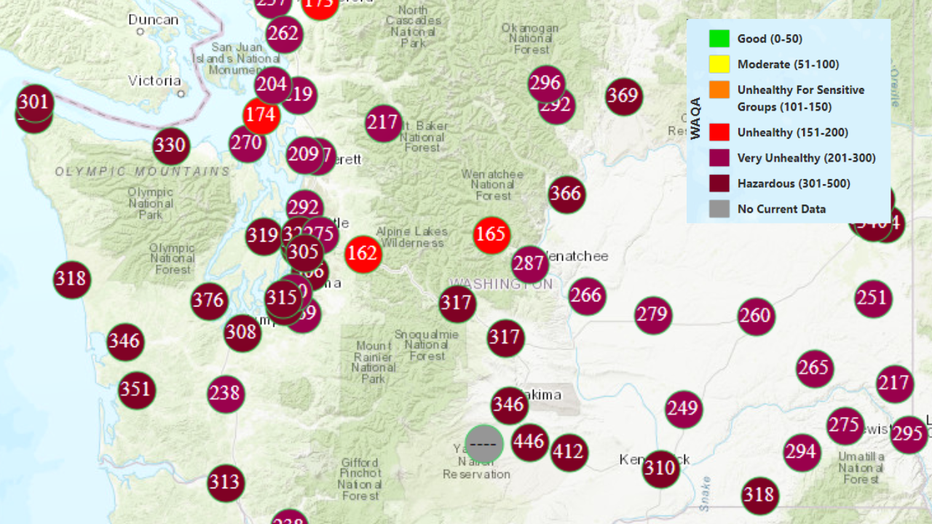 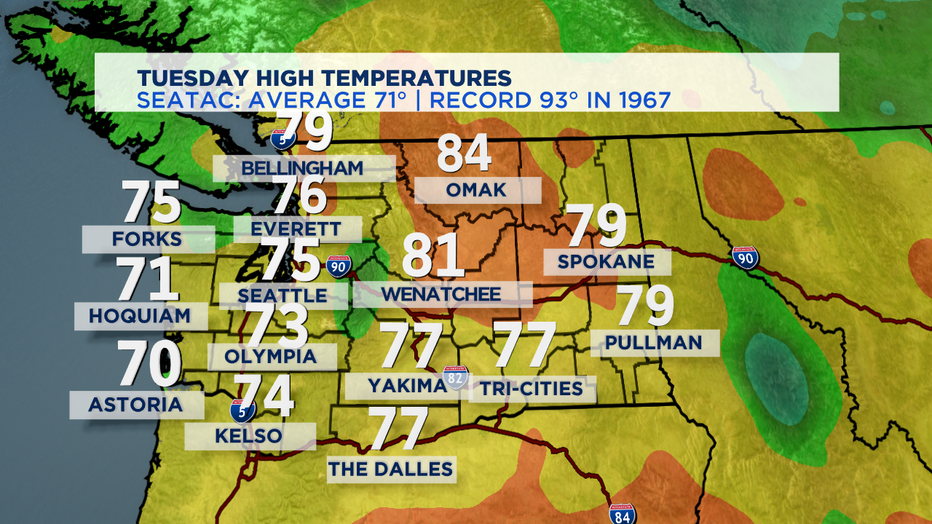 A few light showers moving through tonight, but not enough to scour out smoke and haze from wildfires burning in Washington, Oregon and California, but now our neighbors to the north are fighting several raging fires in Canada.

Tomorrow will be almost a repeat of today.  One thing to keep an eye on is if your phone is telling you it'll be near 75-80 it's because it would be if you could get above the smoke, which none of us will be able to do here at near sea level. The computer forecast models have a hard time calculating for how much the smoke layer bounces away the sun's rays. As a result, we're significantly cooler than we would be without the smoke.

So, here's a look at tomorrow's forecast.... widespread smoke with patchy fog in the usual areas mixing in the morning hours.  Fog normally would give way to a sunny day, but the smoke will remain.  Highs will land in the upper 60s to mid 70s with winds out of the S/SW at 5 mph.   These winds will continue to carry smoke from the south. 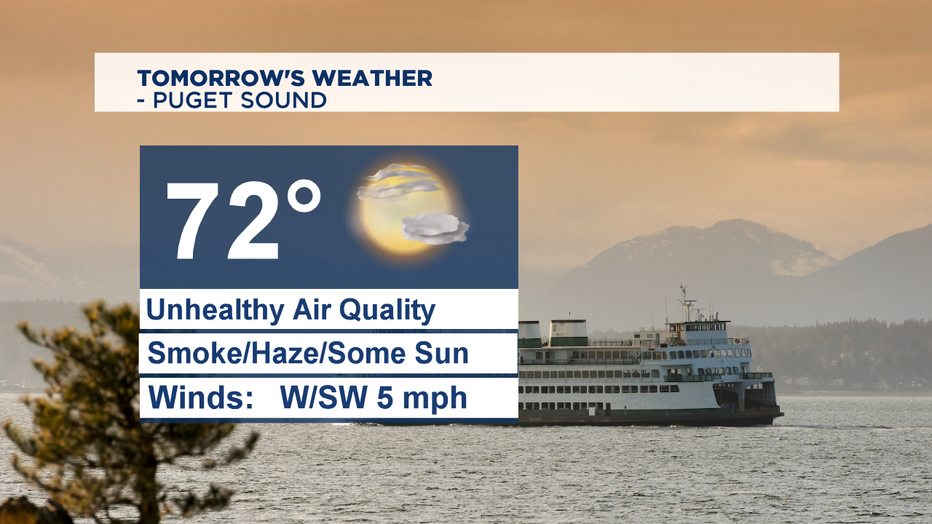 Thursday will bring more of the same with only a slight rain chance along the coast and over the Olympics.  Highs near normal in the low 70s.

Our best chance and shot to cleanse the region will be really early Friday morning when our next weather maker delivers a stronger punch of rain. In fact, with the instability in the air Friday we may see a few pop-up thunderstorms rumble up the Cascades from the south. Highs will look more like fall, landing only in the mid to upper 60s. 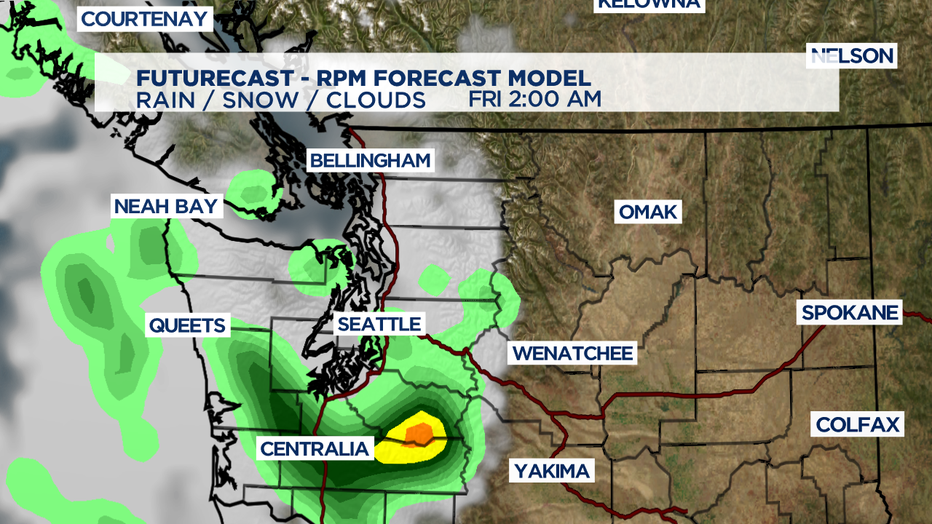 We're especially watching Friday's forecast as the Sounders FC will host LAFC at CenturyLink Field. Kick set for 7pm on JOEtv.  Air quality at that point should be near "Moderate" levels.  Fingers crossed.  If all goes well the rest of the weekend we're forecasting "Good" air quality levels, but again this will all be dependant on Friday's rain. 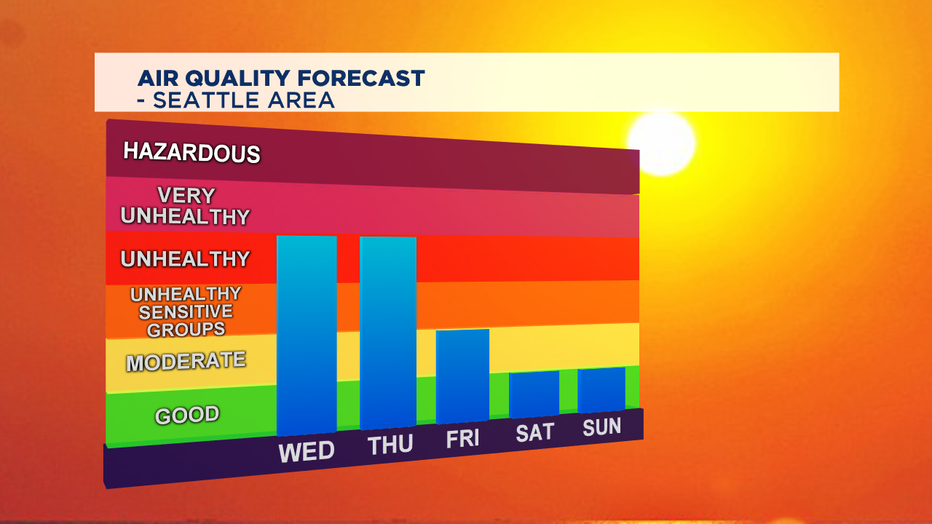 This is the last weekend of summer. The fall equinox is next Tuesday when the whole planet sees 12 hours of day and 12 hours of night. 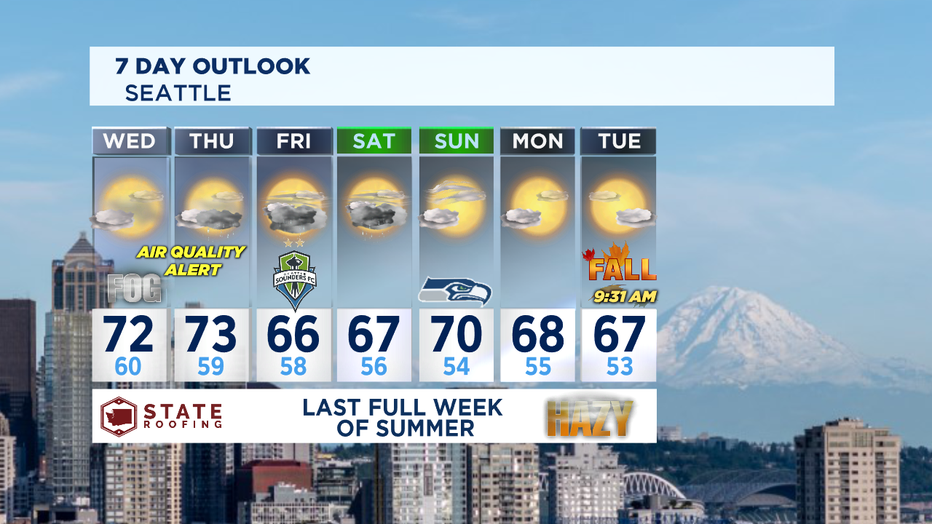