Showers on and off Saturday with mountain snow expected

SEATTLE - A very active system blasts the West Coast as we sail into the weekend. Widespread lowland rain along with mountain snow make for a sloppy Saturday. Plus, winds kick up with gusts up to 50mph for some, especially the coast, the Strait, Islands, North Sound, and foothills. 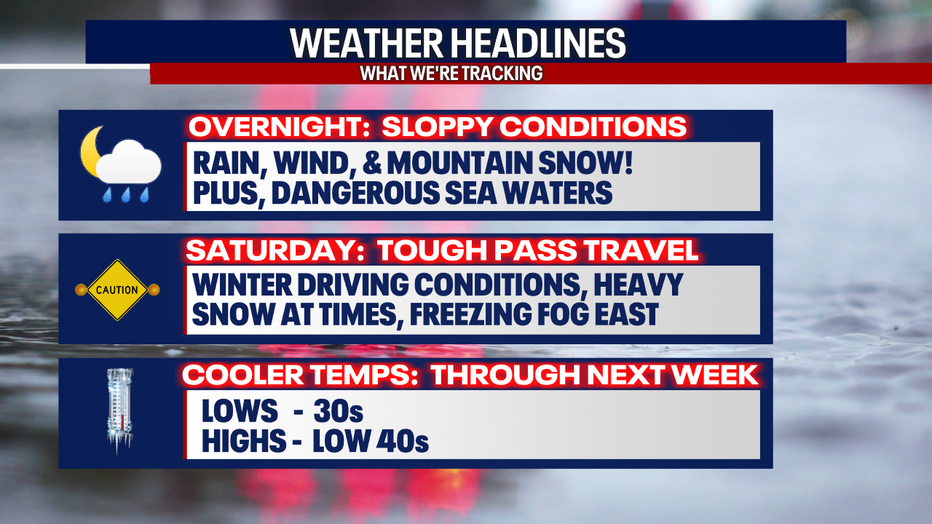 Overnight, temperatures are once again pretty mild for most of us except the Hood Canal area. Temperatures in that area will drop into the mid 30 while the rest of the region only cools into the upper 30s to low 40s. 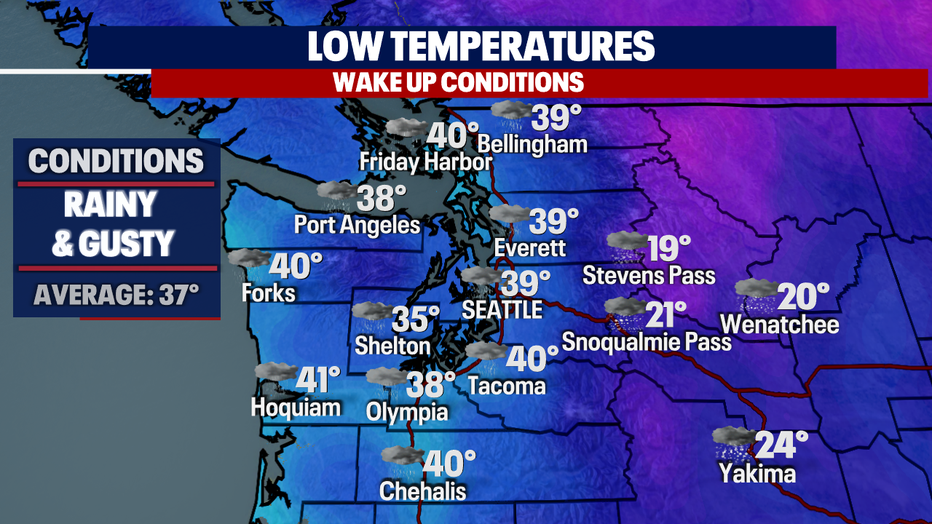 With temperatures a little colder around the Hood Canal area there is a "Winter Weather Advisory" in effect through 4 a.m. Saturday.  As snow levels sit near sea level, folks could potentially see a few inches of snow overnight. 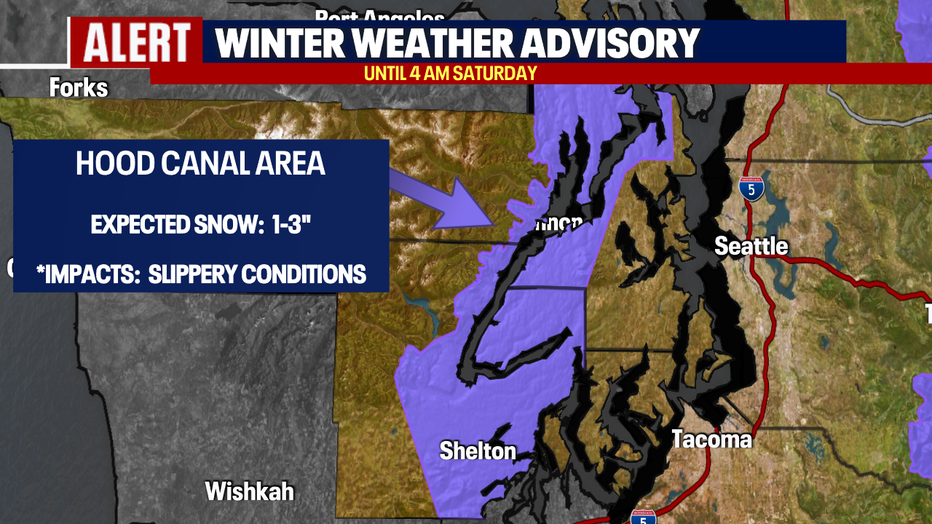 We expect a decent amount of rain to fall as this storm blows through Western WA. Some places will push near an inch like Shelton, with other spots, like Seattle, pulling down close to .75" through late Saturday night. 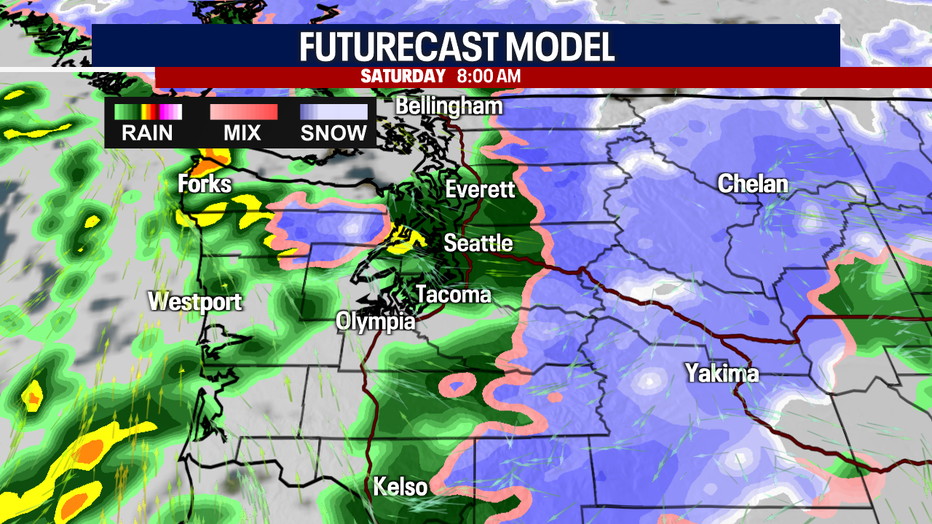 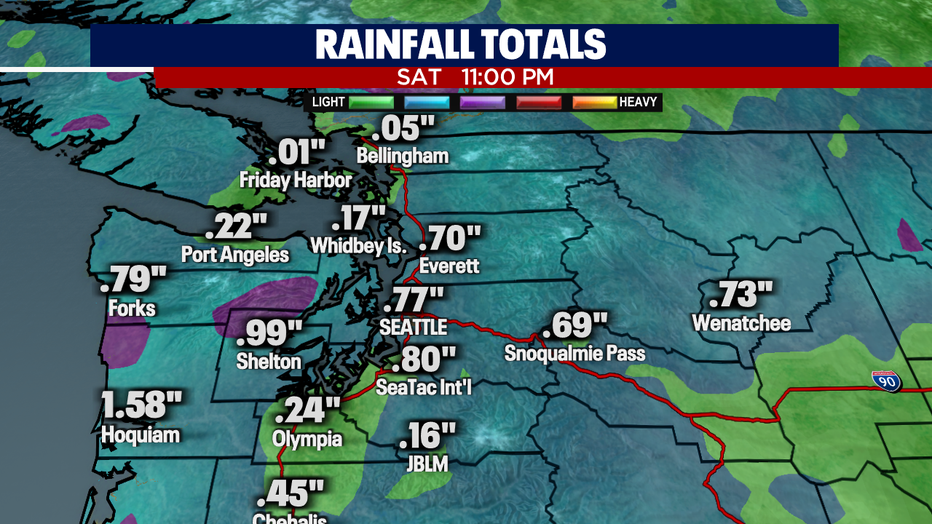 A "Storm Warning" is up for the coast and into the Strait for very rough sea waters through tomorrow.  We expect east winds to gust up to 50 kits, which makes for hazardous conditions, especially for smaller boats and vessels.

Island waters can expect winds to gust out of the east 20-30kts under a "Small Craft Advisory".

And finally, the SW WA Coast and NW Oregon Coast may experience tidal overflow during this time.  A "Coastal Flood Advisory" remains in effect for minor flooding with the potential for a foot spilling over during high tides. 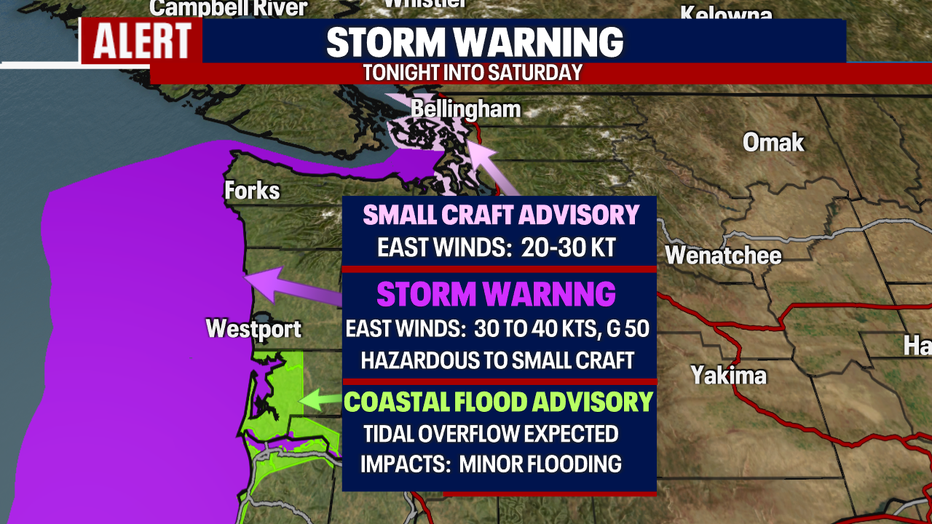 As heavy rain falls across the lowlands, the Cascades will see another big round of snow.  A "Winter Storm Warning" is in effect for many mountain counties through Saturday afternoon for 10-24".  The most northern and southern Cascades will see snow pile up while the Central Cascades of Snohomish and King Counties are only under a "Winter Weather Advisory" during this time with lesser totals expected.

We expect winds to gust up to 40 mph blowing snow around causing very poor visibility when trying to drive through the mountains. Use extreme caution and now the roads. 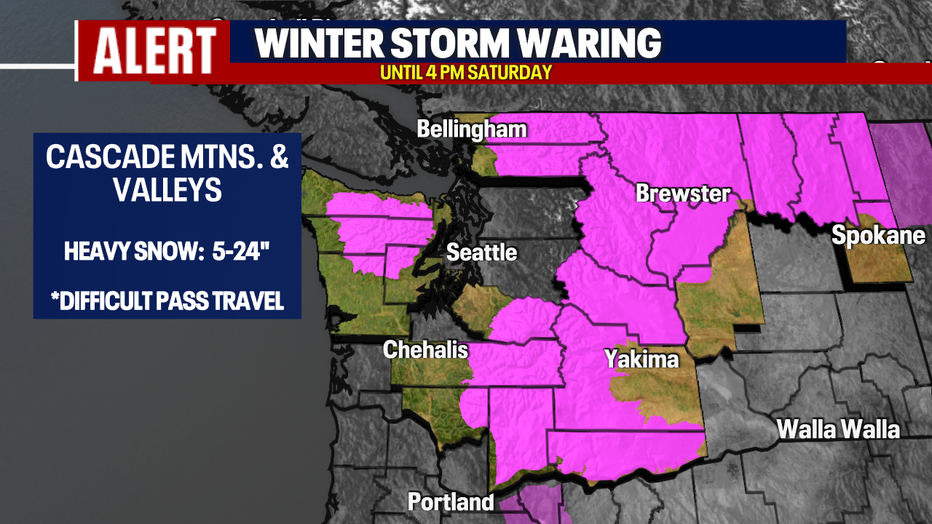 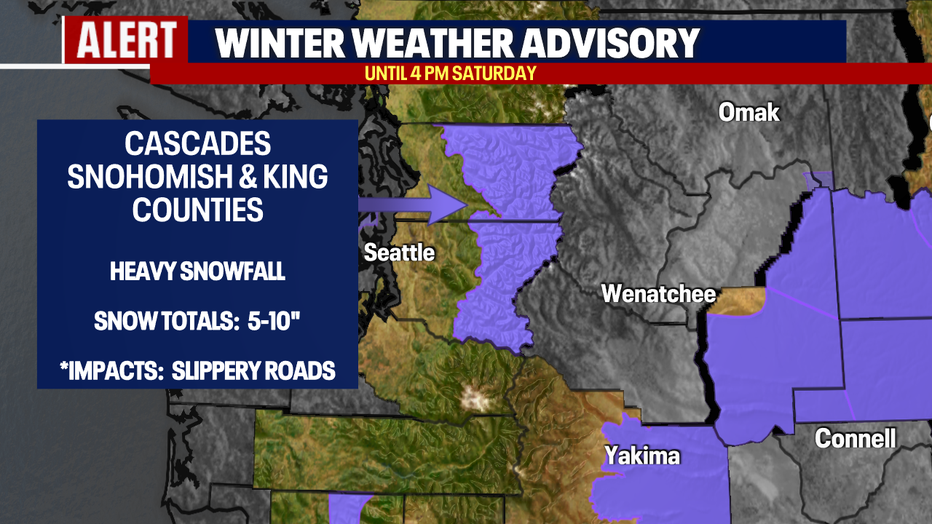 Now let's talk about the winds! Peak wind speeds happen overnight with gusts forecast near 45 mph at times along the coast, the Strait, the Islands, the North Sound, and foothills.

Winds will slowly start to relax into Saturday afternoon, but until then those communities hang under a "Wind Advisory".   We don't foresee widespread power outages, but possibly isolated pockets instead.  Watch out for down trees or limbs when going out and about in these neighborhoods. 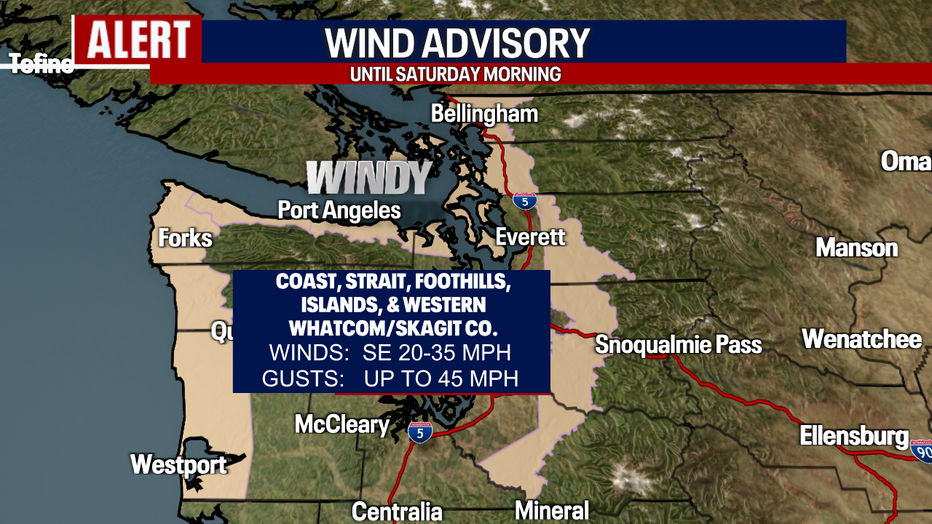 By late Saturday night into Sunday, we'll start the transition into a drier second half of the weekend.

If you're a Seahawks fan heading to Lumen Field, dress warm.  Highs Sunday are only forecasted into the low to mid-40s as the Hawks host the Carolina Panthers.  If you don't have tickets to the game, no problem…the Hawks are on Fox.  Kick off set for 1:25 p.m. 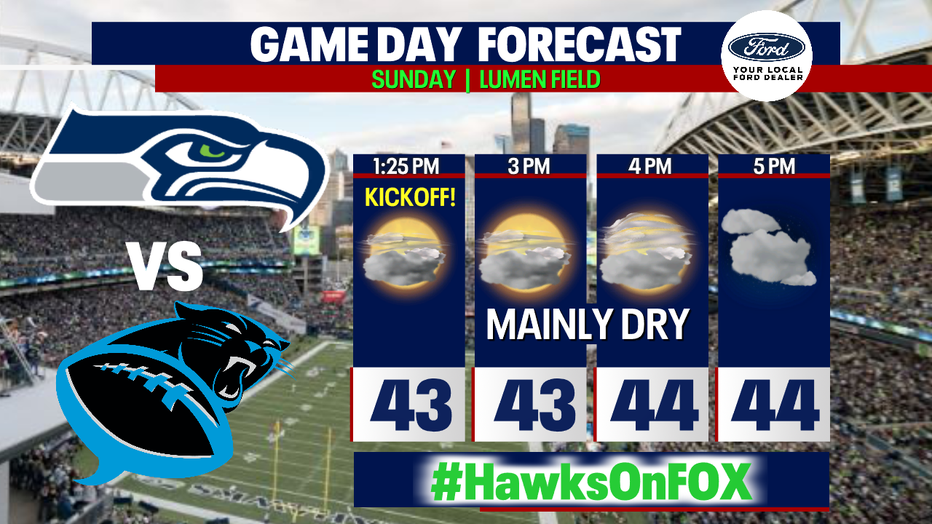 Next week looks quieter with drier and cooler conditions along with a decent amount of sunshine, but stay tuned as models are not completely in sync at this point. 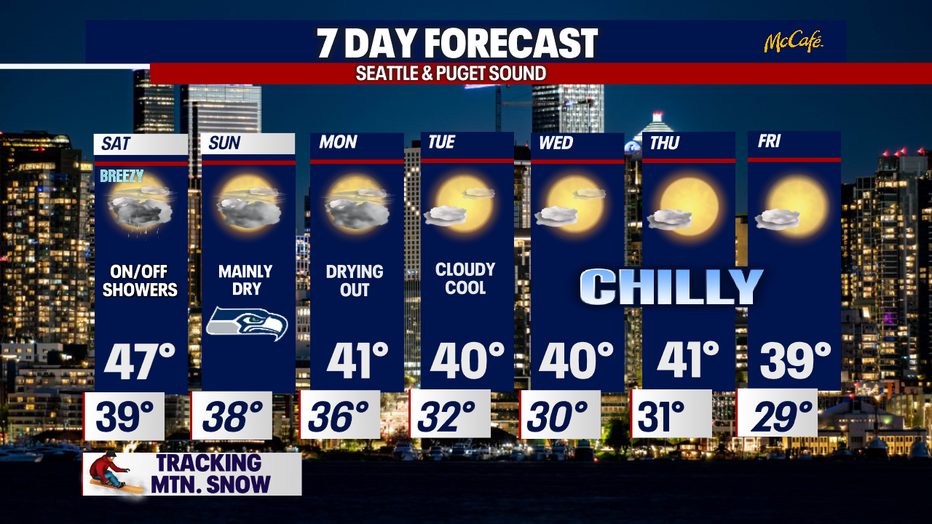