After the crazy, cold wet weekend, you'll want to enjoy the relatively dry and calm weather while you can. FOX 13 Chief Meteorologist Lisa Villegas is tracking an even bigger storm than what we saw over the weekend, and in around 24 hours it's going to be right on top of us!

SEATTLE - What a day, huh!? The sun was out, and we were dry for the first time this month. Highs peaked in the mid-50s for most of us and we officially reached a high of 56 degrees. I hope you were able to soak it up because, like always, things are changing!

A low-pressure system, offshore, is allowing for the wind speeds to increase this evening. A wind advisory is already in effect for the foothills until 8am tomorrow morning. Winds will especially be strong through the Cascade gaps as they continue from the East. Once the winds shift out of the South, they will weaken for this area. 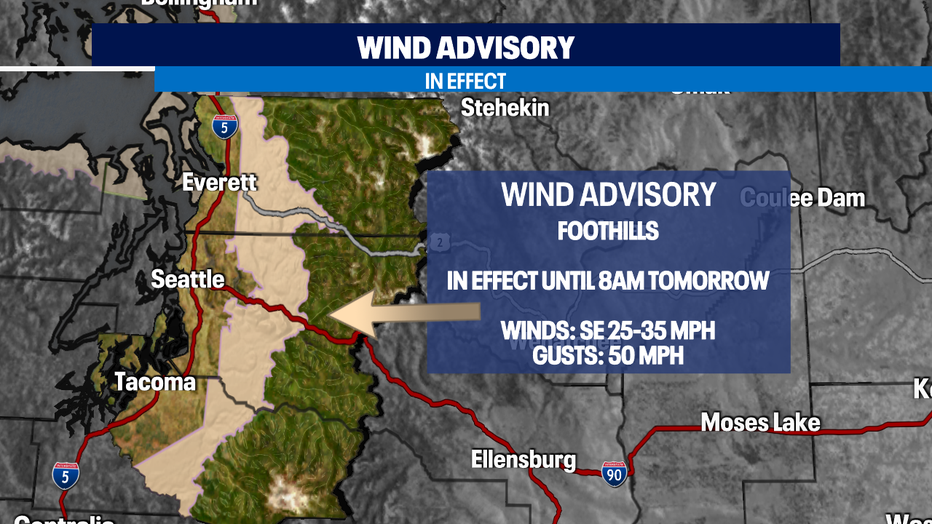 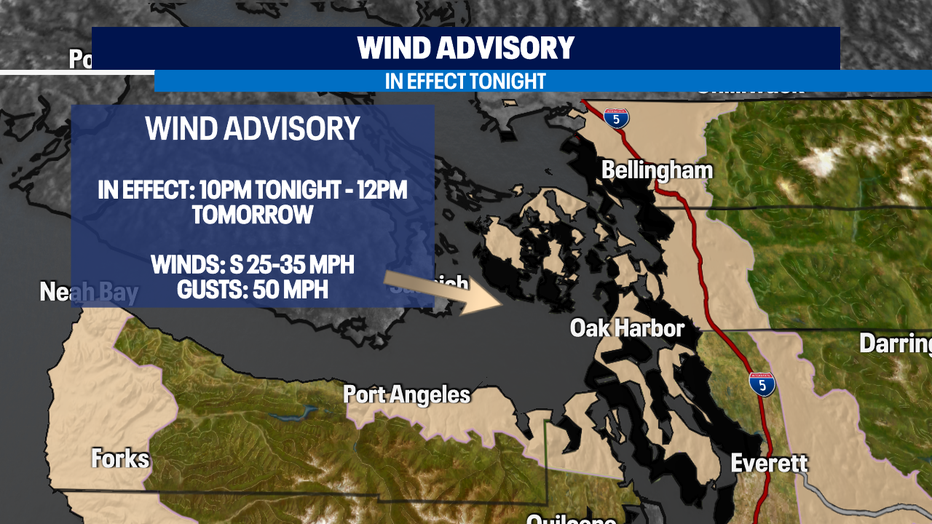 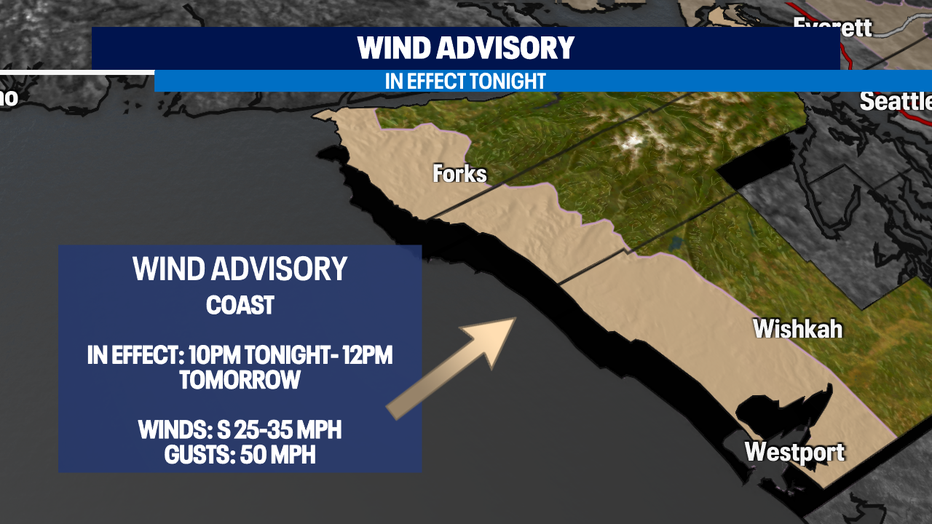 Wind advisories for the North Sound and Coast go into effect at 10pm tonight. This has to do with the wind shift out of the South. As that happens, they become potentially dangerous for these two areas. Wind gusts could top out at 50 mph for these highlighted areas above.

It'll be windy for the lowlands at times too, but it should be dangerous. You'll notice those breezy conditions on that early morning commute. 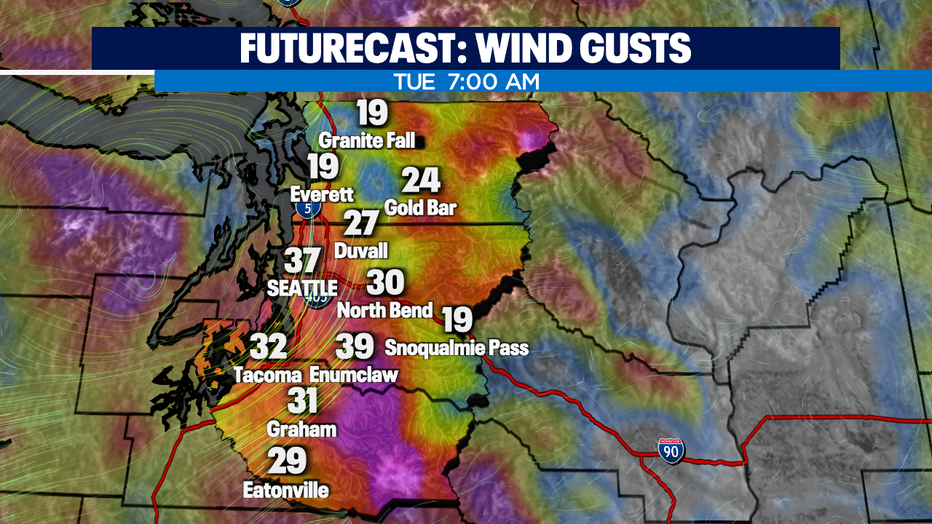 A winter storm warning will go into effect for elevations over 3,500' beginning tonight. If you are travel through the passes in the next 24 hours check in the road conditions! There are no delays now (7:30pm) but this could quickly change. 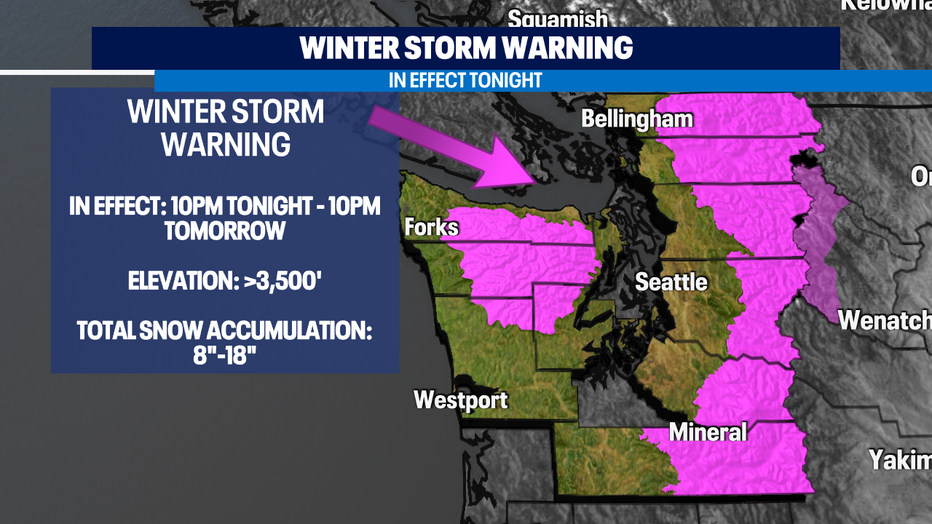 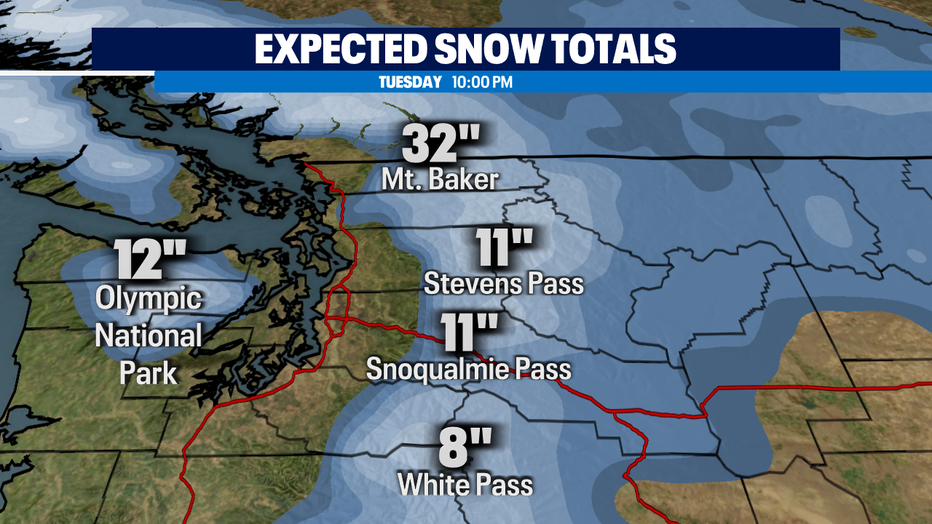 Here is a glimpse of futurecast as it times out the rain. The cold front will impact us tomorrow, but we'll still get a round of rain tonight. 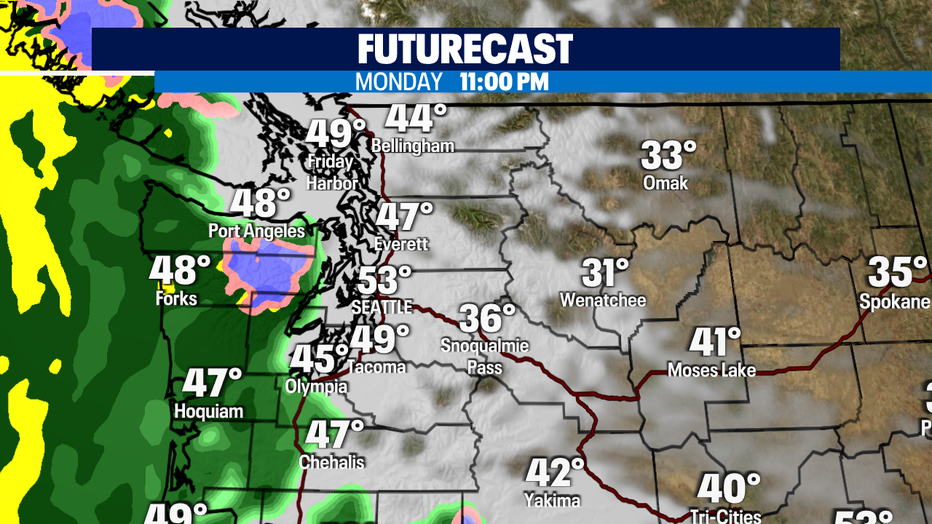 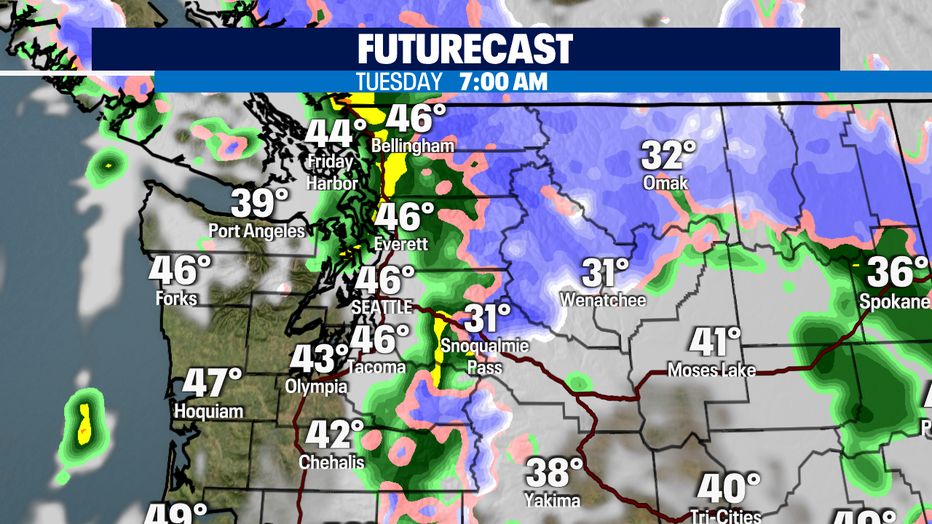 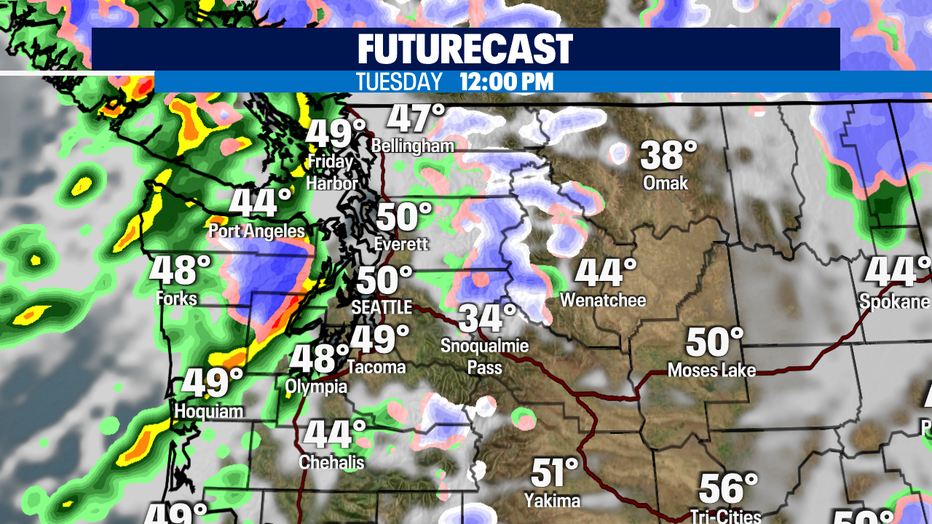 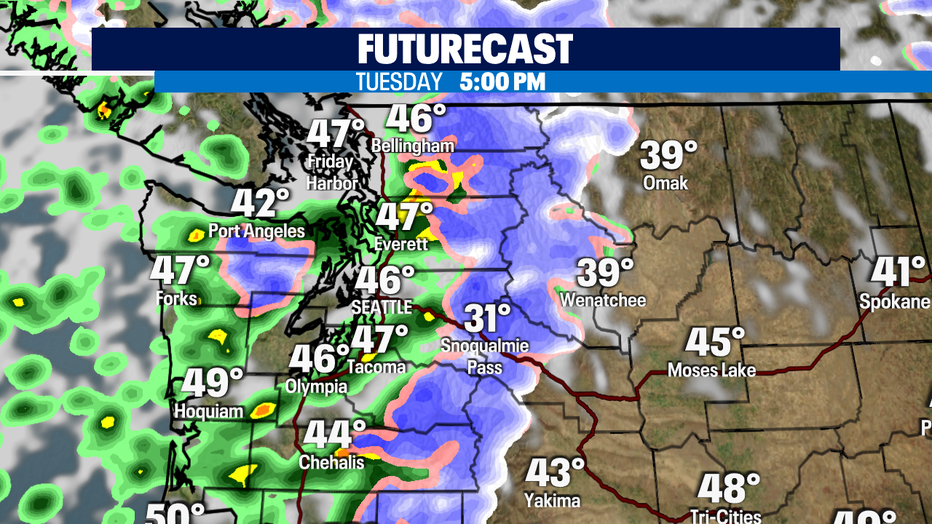 As the coastal flood advisory goes into effect, pay attention to high tide late Tuesday morning. That's when the potential for flooding will be at its peak! 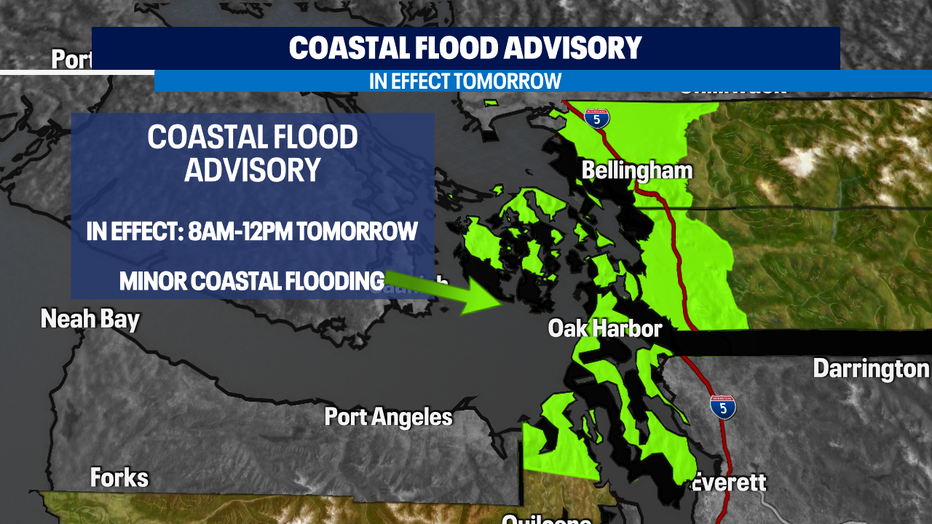 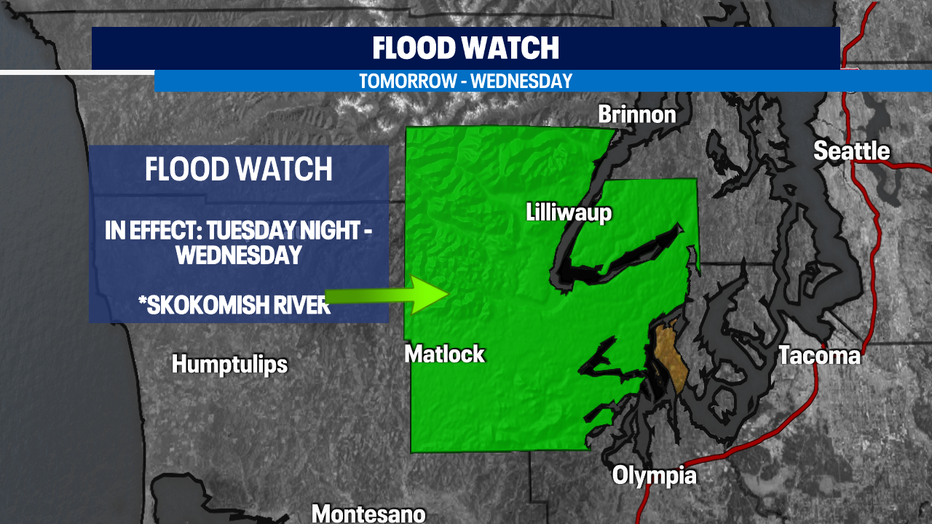 There is a lot happening in the next 24 hours. Use caution and keep it on Fox 13 for the latest!