Seattle - Yes, we were very chilly today across the Northwest.  Temperatures ran 10+ degrees below average.  In fact, according to the National Weather Service, we missed breaking a 50-year-old record low maximum temperature by a degree. (56 in 1972). 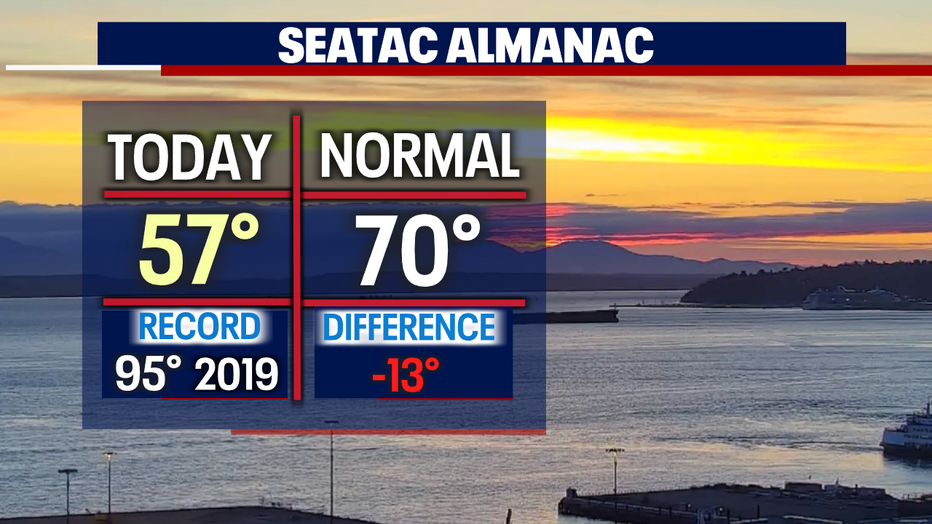 Overnight lows fall into the upper 40s to near 50 around the region.  Most shower activity settling in over the foothills and mountains with Eastern WA seeing the heaviest rain. 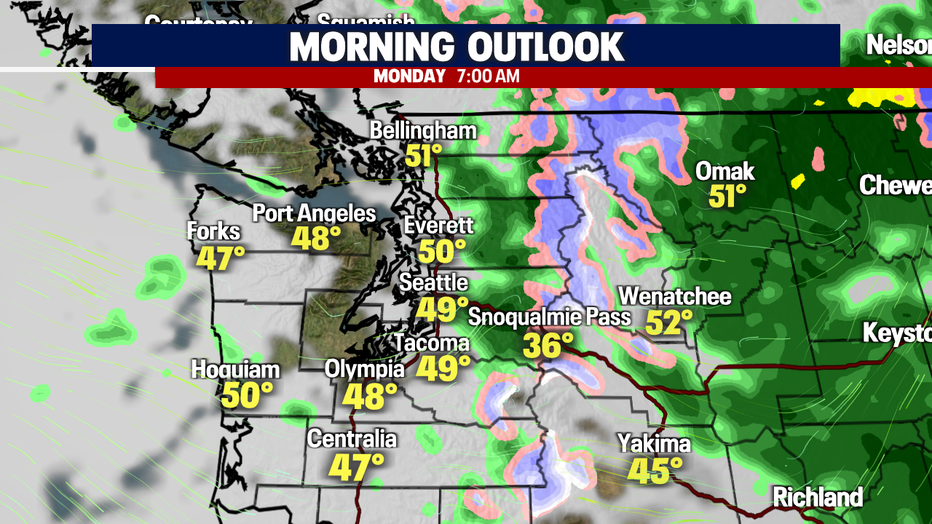 A "Flood Watch" is in effect Monday for many counties in Eastern WA along with Eastern OR, Idaho and Montana as excessive amounts of rain continue to fall.  We'll be keeping an eye on creeks and streams as they potentially could rise out of their banks. 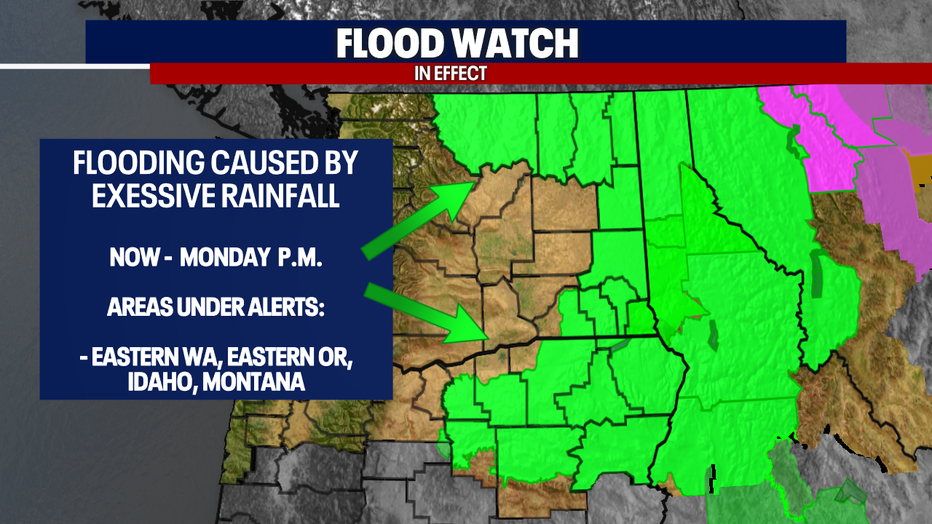 Unfortunately, this week will not look or feel like late spring or early summer.  Our weather trend will feature cool and showery conditions. 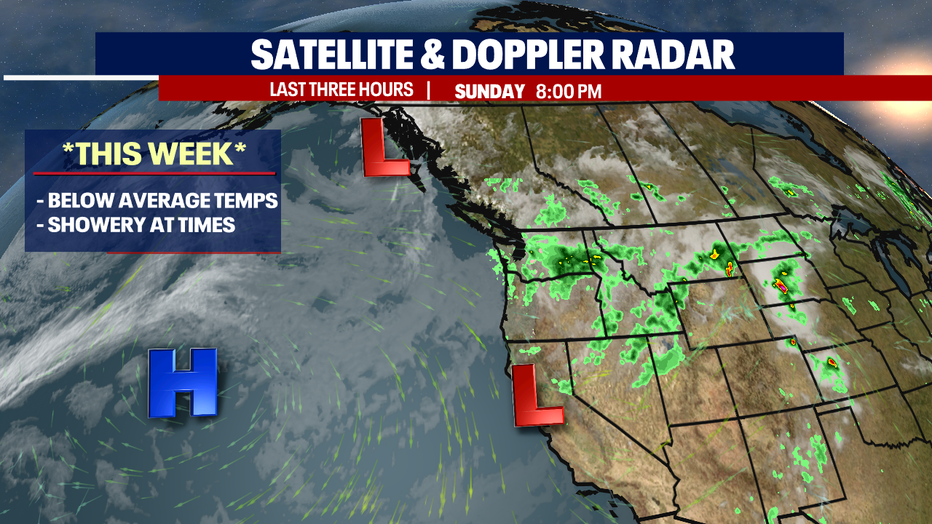 Our temperature trend has us well below the seasonal average for this time of year.  The normal high for Seattle is supposed to be 70 and bumping up to 71 by Tuesday, but we'll hang in the low to mid 60s through Wednesday.  Thursday, we hope to warm into the upper 60s, but we fall right back down as we cruise into the weekend. 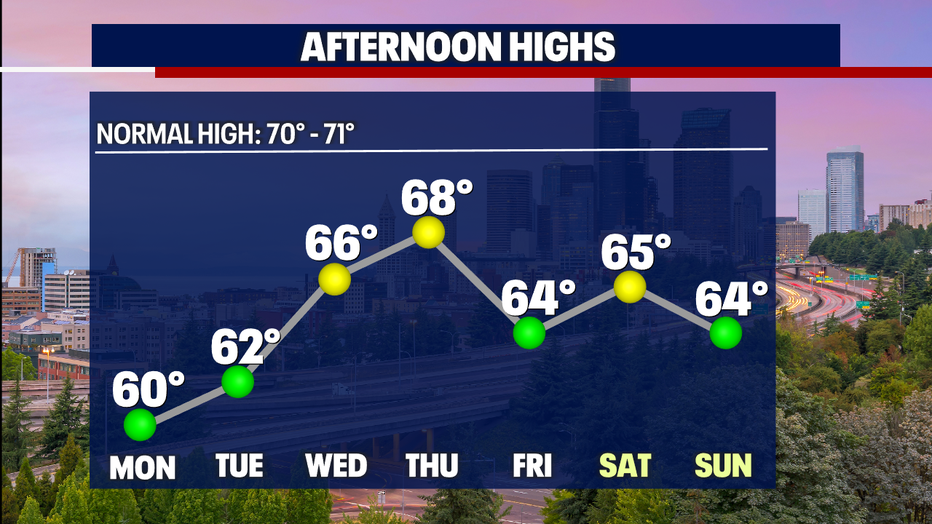 Monday starts off mostly dry with just a few spotty showers.  By late evening rain could fire up over the convergence zone in King and Snohomish counties. 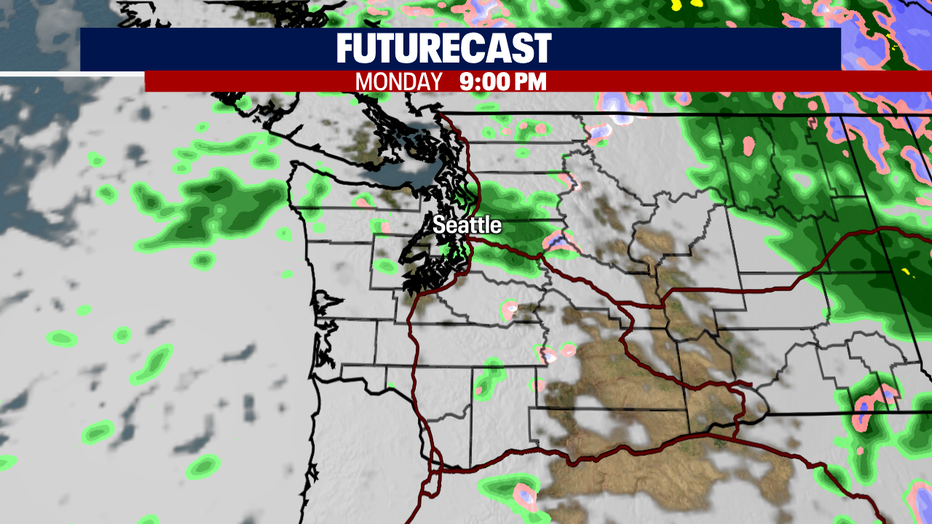 By Tuesday showers should diminish as we move through the day.  If you're heading to the Sounders vs Whitecaps match at Lumen Field dress warm as temperatures will only be in the upper 50s with a mainly dry forecast.  Kick off set for 7:30pm. 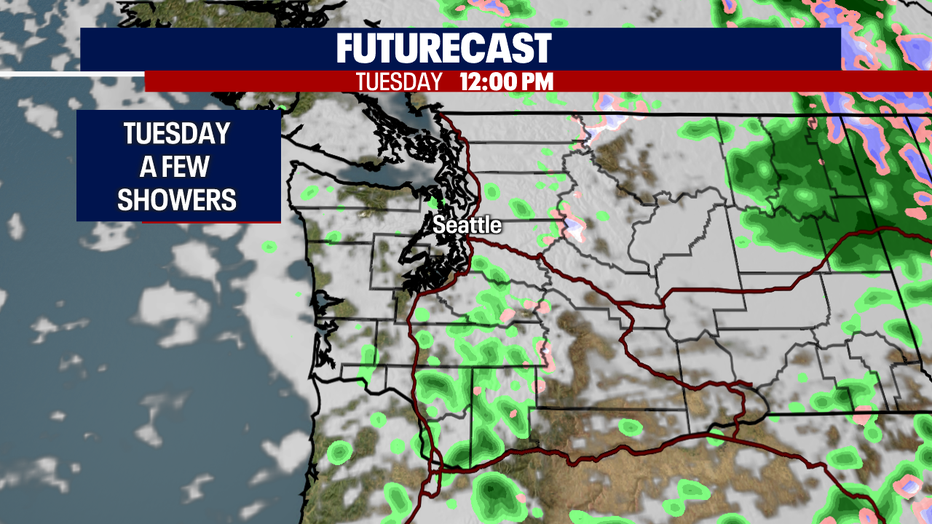 At this point the driest day of the week is Wednesday.  Temperatures will warm into the mid 60s under mostly cloudy skies. 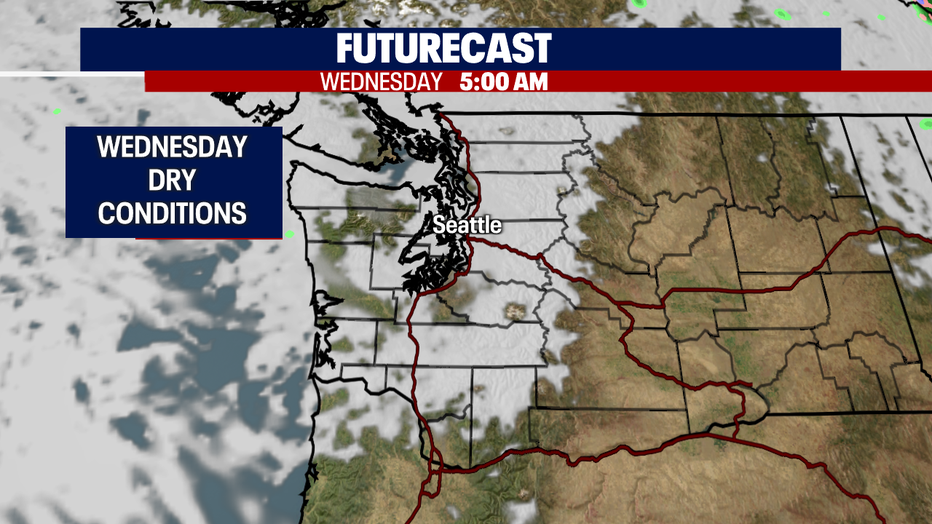 Thursday and Friday feature partly sunny skies with a chance for a few light showers.  Thursday will warm to near 70, but Friday highs cool into the mid 60s.

The forecast for the weekend is mixed.  We're forecasting a chance for a few showers Saturday with drier weather Sunday. Highs land in the mid 60s. Enjoy! 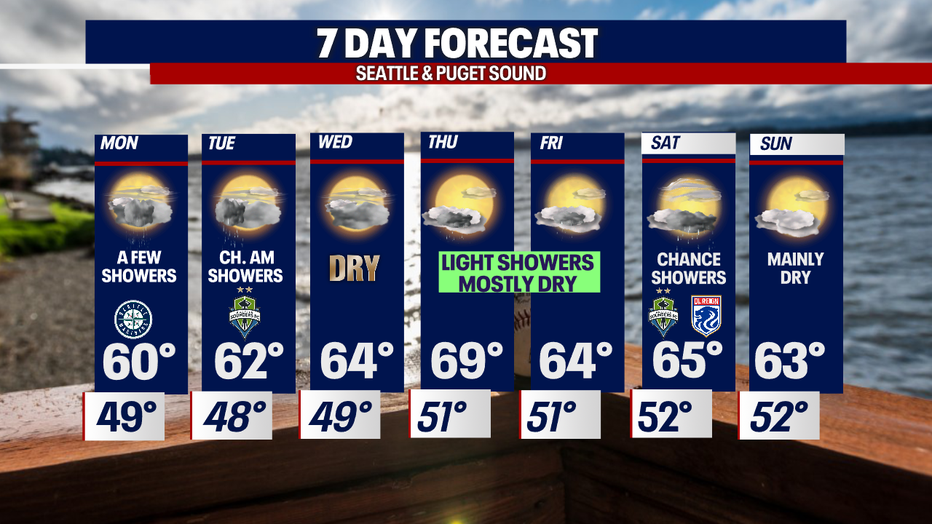 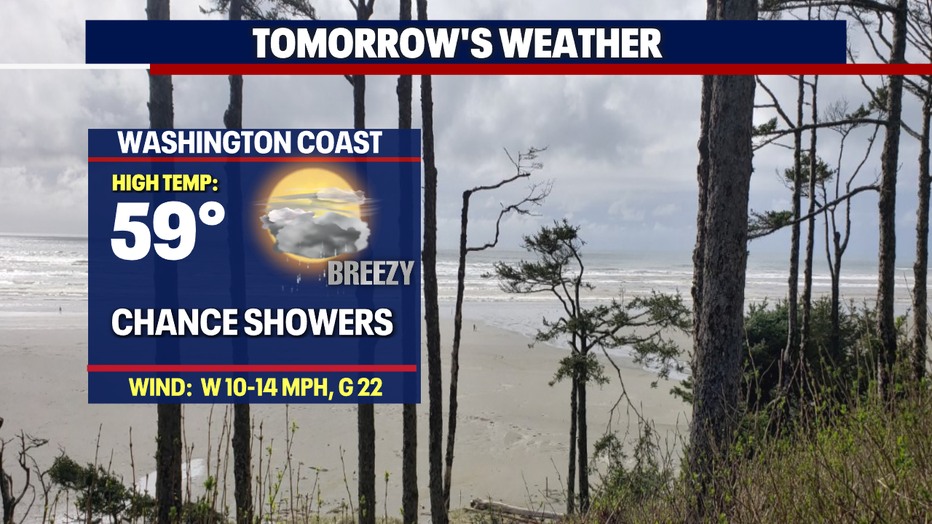 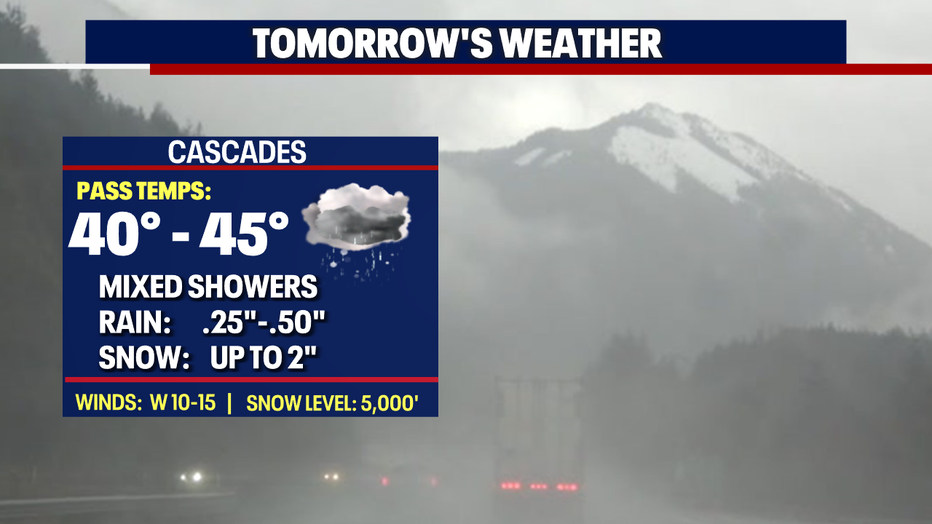 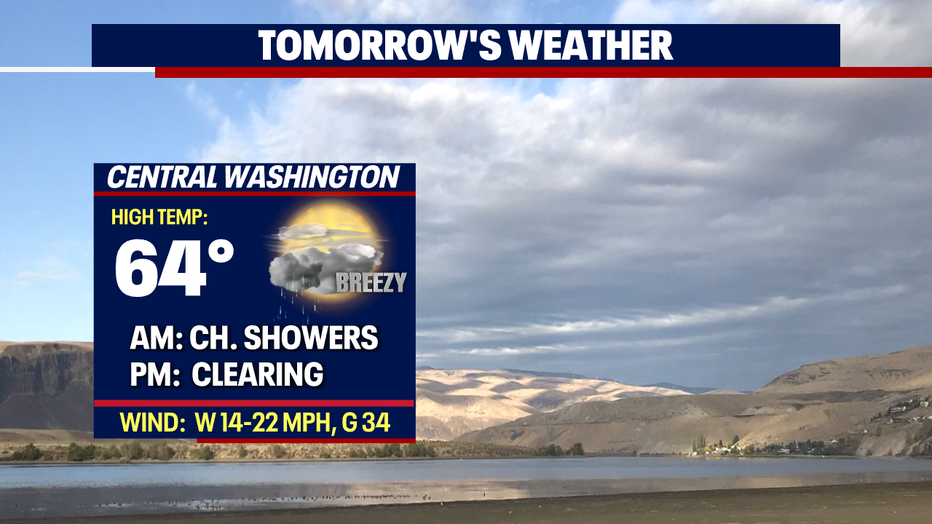