The heat is on today!

Sunday and Monday are going to hit 90 degrees. It's way warmer than we've been used to this spring and summer, so please take care to beat the heat! FOX 13 Meteorologist Abby Acone has the details.

SEATTLE - The heat is on: highs this afternoon will soar into the upper 80s to low 90s for many backyards in Puget Sound. Some communities close to the Olympics or Cascades could even skyrocket to the mid to upper 90s! 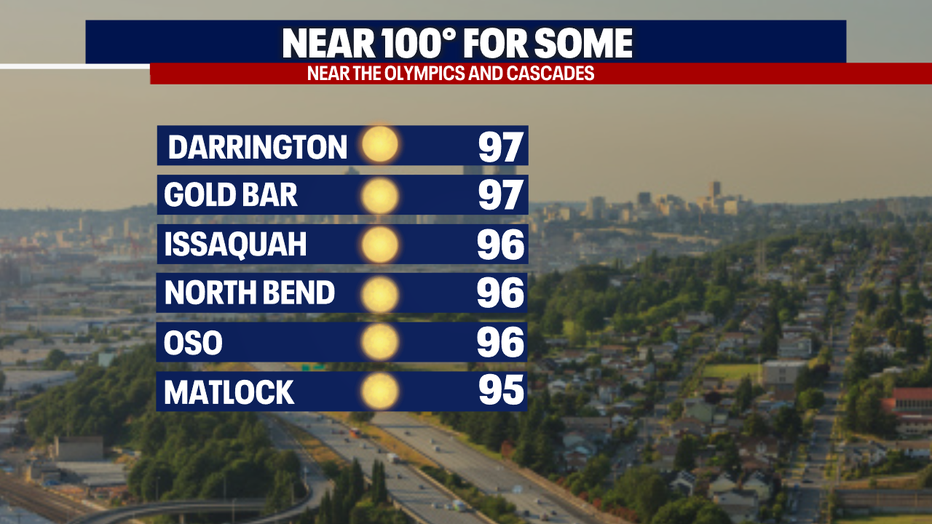 Temps today may be drastically warmer than our cool and wet spring; however, our highs don't come close to the extreme heat we saw this time last year.

Tomorrow, highs could boost to around 90 again for Seattle, but there's a little more uncertainty in the forecast for tomorrow. A slight change in the weather pattern could lead to cooler or warmer temperatures than we're expecting right now. Tuesday, highs will drop by about 20 degrees thanks to a return of our familiar onshore winds—which I lovingly refer to as "Mother Nature's A/C." 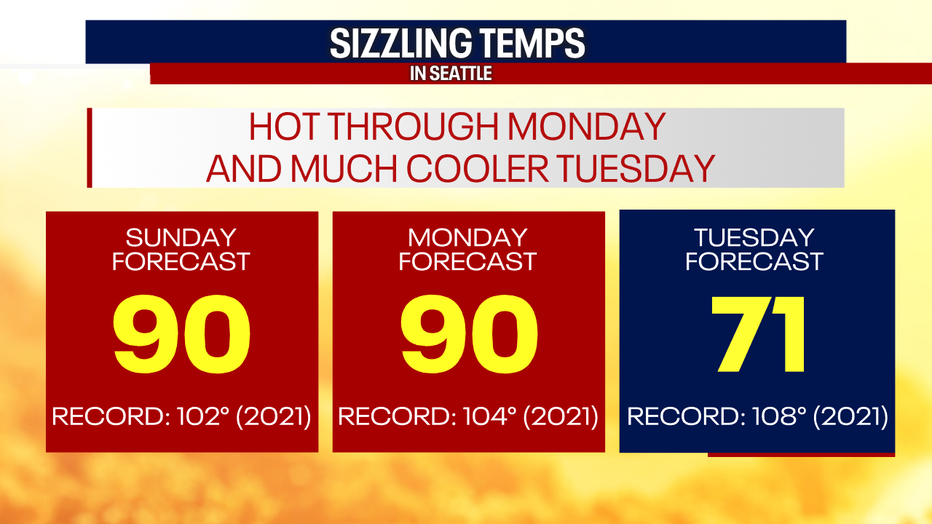 It's no wonder the National Weather Service is continuing this Heat Advisory through 11 p.m. Monday. With overnight temperatures only bottoming out to the low 60s early Monday, get ready for exceptionally uncomfortable sleeping weather if you don't have A/C. Keep those fans well positioned and blasting!

Today, what's called a "thermal trough"—a corridor of hot, dry air—will be focused in Southwest Washington. Outside of the foothill communities seeing highs in the mid to upper 90s, the Southwest Interior of Washington will be hottest area in the state today. 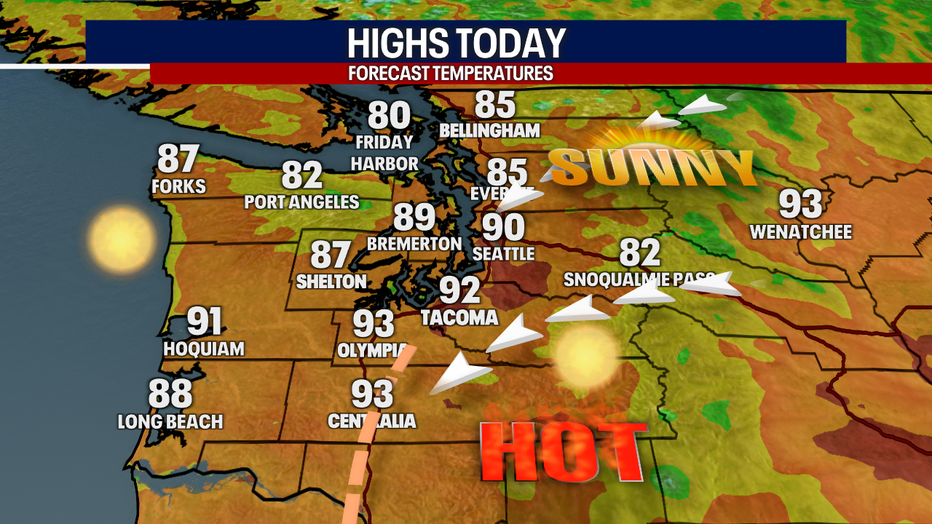 Tomorrow, that thermal trough moves into Eastern Washington. That's going to lead to westerly winds around the region, which should knock temps down in a major way along the coast. Right now, it seems like the 90s are once again a good bet for Central and South Puget Sound, but if those westerly winds arrive earlier – Puget Sound could be cooler. In the reverse, if the thermal trough leans farther west, temps along the I-5 corridor could be hotter. Either way, it's going to be another hot afternoon around the region. 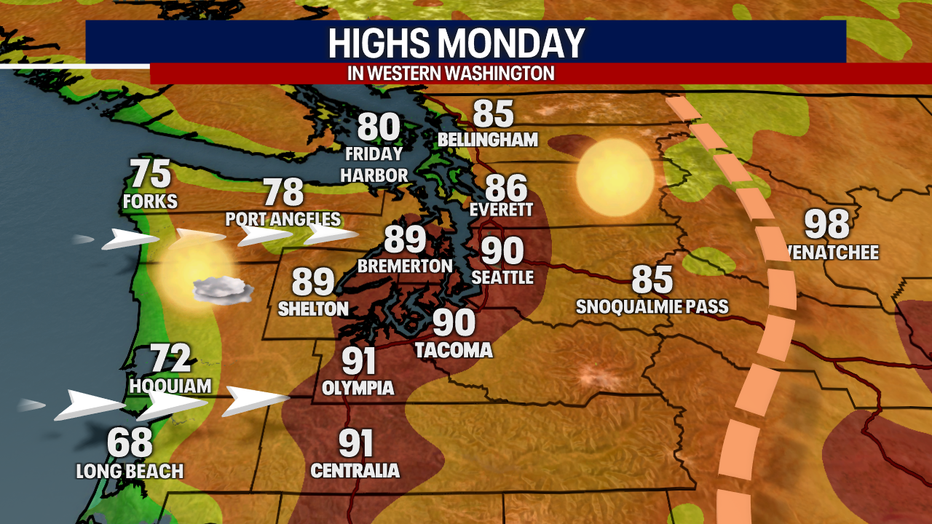 Here are a few reminders in the heat: take extra care of your children, seniors and pets. Never leave people or pets in a hot car! Make sure to wear sunscreen, seek shade and drink plenty of water. If you're heading out to local lakes, creeks and streams, wear a life jacket. Water temps are still dangerously cold. If you're going hiking, pick a trail that matches your hiking level and experience. 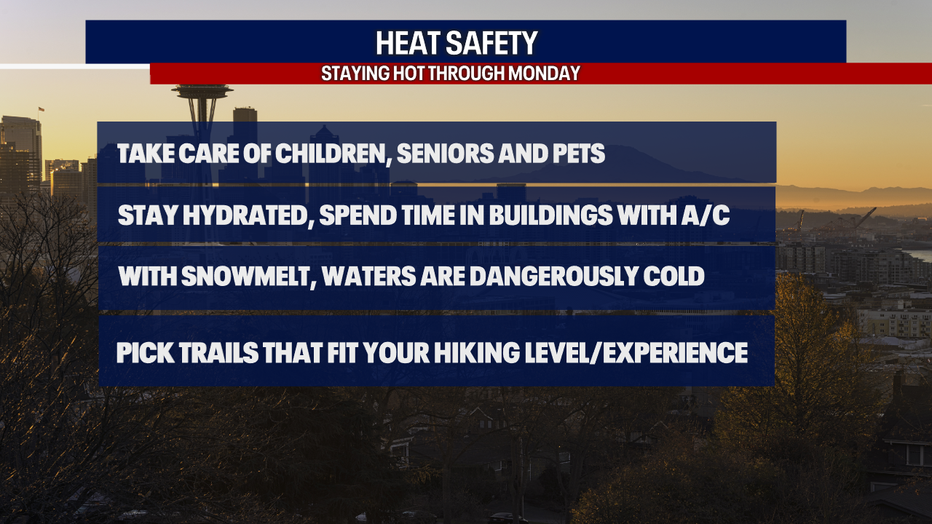 There's a small chance for thunderstorms late Monday into early Tuesday. The North Cascades have the best possibility for a little lightning (and even then, the chance is slim). Stay tuned – this forecast is dynamic and subject to change.

Wednesday will be cooler with an isolated shower. Thursday, Friday and Saturday (Fourth of July weekend) look dry and warm. 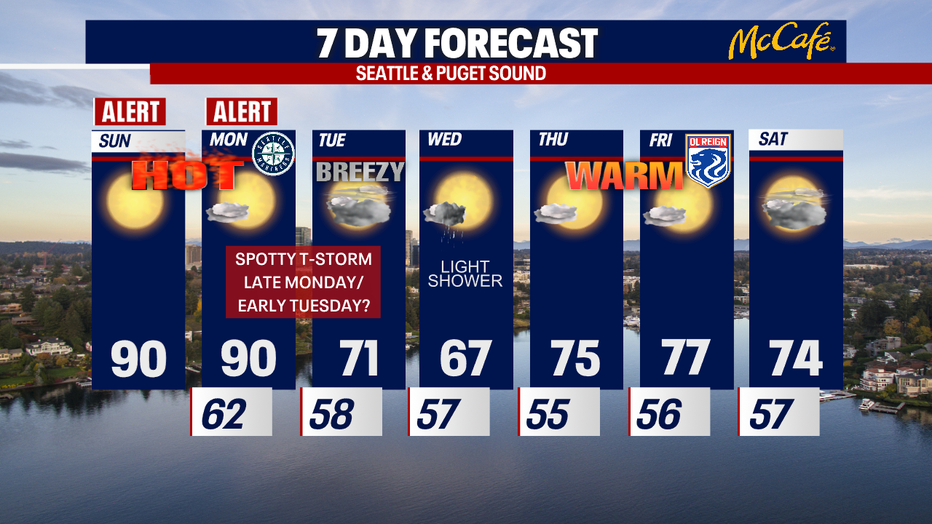 Hope you're able to stay safe and cool this weekend. Enjoy our beautiful sunshine – we deserve it after such a rainy spring!