Washington State Patrol Trooper Jay Farmer was honored as the Washington’s Most Wanted November Officer of the Month for the rescue of a driver who’s car had careened off I-5 near Ellensburg and crashed into a pond. For the first time, WMW also honored a citizen, Jim Kocker, for bravery for his quick action that saved a man’s life. 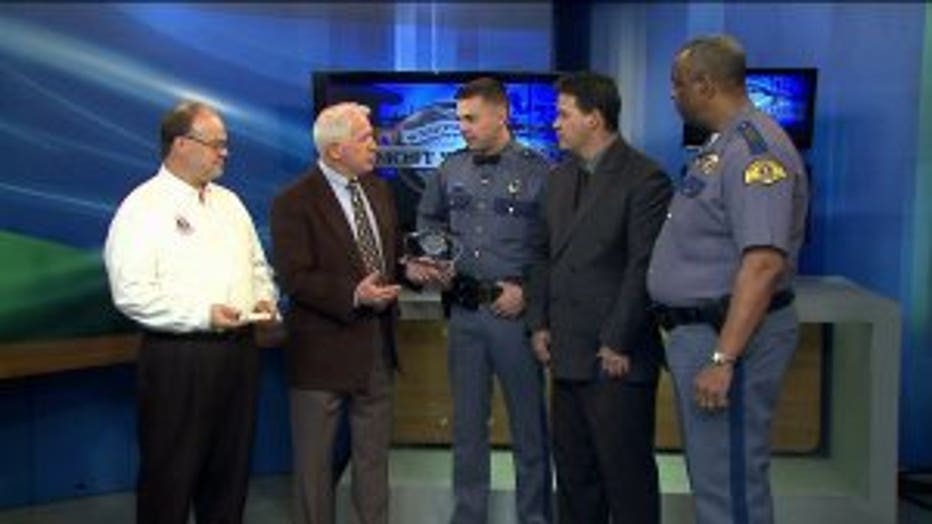 The two heroes dove into the freezing pond to try to free the man belted into his car as it sank into the pond. "I’m a pretty good swimmer and I think for about the first 10 seconds you almost forget how to swim.”  Kocker said. “I got to the car, tried the doors, pounded on the window. No response from the victim at that time.” He said he she saw the driver’s chin move, but he didn't have a tool to break the window to get him out, so he returned to shore.  That’s when Trooper Farmer arrived and both went back into the water. “We knew that we had to break the window and get this guy out, so we used my baton and broke out the back passenger window,” Farmer said. He could reach the driver but couldn’t get him out.  The man was drowning right in front of them. “At this point he was gurgling and yelling, so he was underwater all the way. Jim went around to the driver’s side of the car while I was doing this,” said Farmer. Some would call what happened next a miracle. “At that particular time the window broke and the car sank down even further in the water. And I told my wife, I haven’t told too many people this, I said, 'God if you can help me, this is the time to help me and just at that moment the door popped open,'” Kocker said. "The driver was able to raise his head out of the  water and take a breath and the two men swam him to shore. Washington State Patrol Chief John Batiste was on hand for the award presentation. “That’s Trooper Farmer, he has done a great job for this agency since graduating basic training, another example of what a fine human being he is in terms of his thoughts and caring about others. said WSP Chief John Batiste. "And I can’t thank Mr. Kocker enough for getting involved. Actually, placing himself along with Trooper Farmer in harm’s way without having to do so. Tremendous effort on their behalf that indeed led to a life being saved.”