Crisis Training: Negotiating with those in need

KING COUNTY - An assault suspect was safely taken into custody after a pursuit by deputies last Tuesday ended in a standoff at a home near Auburn.

King County’s Crisis Negotiation Team was able to convince him to come ouf of the home on SE Auburn-Black Diamond Rd and surrender. 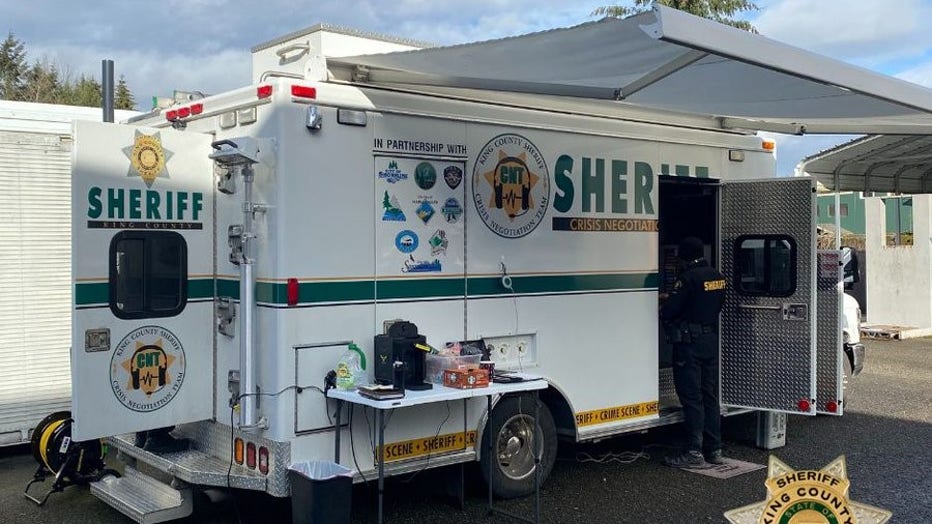 With the extra stress many people are feeling right now, the team's callouts skyrocketed last to 58, almost double from 30 in 2019. There's been times we've had two in one day, you know, as we're packing up, leaving a scene, we're called to another one," said King County Sheriff’s Deputy Joseph Winters.

Their focus is on de-escalation, so they train for situations exactly like the one that unfolded near Auburn.

Inside their mobile operations vehicle is everything the team of 8 deputies needs to communicate in volatile crisis situations.

Once a month, they run a full training scenario complete with built-in challenges and surprises.  I joined them recently at Black River Office Park in Renton as the mock crisis situation unfolded.

"What they're dealing with is a barricaded, armed suspect that conducted a robbery at a local business, got in a pursuit with deputies, was able to get away and then got to the residence, we then receive a 911 hang-up," said Dep. Winters.

Deputy Winters is one of two team leaders on the Crisis Negotiation Team. CNT and TAC-30 deploy together. While the TAC-30 SWAT officers secure the perimeter, the deputies on the CNT start gathering intelligence.  While CNT is gathering intelligence, TAC-30 is working on a safe apprehension plan of the subject while moving into position to control the area where the subject is.

The goal of both teams is to take a fast-moving situation and slow it down, using time and de-escalation to resolve the situation peacefully. "We’ve been on callouts for 6, 7, 8 hours, negotiating, trying different things. Our general rule of thumb is don’t lie," said Dep. Winters.

Just like in a real situation, the deputies have to start from scratch gathering information and what they don’t know yet is that the suspect is in the home, holding his girlfriend hostage. The roles are acted out by members of the sheriff’s department.

The team says the most important thing is to keep them talking, because while hostage situations like this one are rare, they do happen. Last February, a man took four people hostage and barricaded himself in a home in Issaquah. "Me and another teammate were in that house," said Dep. Winters. They freed the hostages, but the suspect just refused to speak with them and was later found dead in the home.

"These are human beings that we're dealing with. These are loved ones, this is your sons, daughters, wives, husbands, you know, so for us, this is just, it’s real," said Dep. Winters.

It may be people who are hurting, dealing with mental illness, drugs or alcohol or anger over a situation. "And, our goal is to get these people to see that there is light at the end of the tunnel and that there is hope," said Dep. Winters.

So, every time the team responds, Susie Kroll is there too. She’s a licensed mental health professional who works for Redmond Police.  "The most surprising thing that I tell people, when they find out that somebody like me exists is, I hear people say, ‘It's about time’ and then I tell them that this has been going on and I've been working with this team since you know, late 2016, early 2017," said Kroll.

She sees mental health and behavioral health problems in 99% of their standoffs. "It may be something like anxiety or depression, or it may be something significant, like a diagnosis of schizophrenia. But, for me, they play into every call," said Kroll.

Her assessments help the negotiator build a rapport with the barricaded suspect.  "My job is to do research and see if I can get history or any information related to that person's mental health status, whether that's accountings of people that they know, or maybe treatment providers in extreme emergencies, or if they are providing me that information, myself, or I'm hearing it through the call, then I do my best to see if what I'm being told, or what I've researched is congruent with how that person is behaving on the phone," said Kroll.

She also monitors the negotiation team, conducts ongoing mental health training for the deputies and follows up with the suspects and their families.

"It just started with what happens next and I have my partners explain the legality and the law enforcement pieces, and then I come in and say, you know, this person is going to be taken to the hospital or if they're being taken to jail and I'm seeing indicators of a behavioral health issue, then I will contact the mental health professionals at the jail to provide information about what I saw so that while they're going through whatever legal or court process is going on, then I'm helping facilitate connections to resources, or helping the family of the person navigate the system because they likely have never been through this either.   It can be just as stressful, if not more so, for a family to not know what's going to happen next and how they can be effective in helping," said Kroll.

The woman in the training scenario continued to refuse to cooperate, so they had me take a turn in the negotiator’s chair, "Chelsea? How you doing? If you just come out and talk to us for a moment, everybody will clear out," I said. But, before I could make much progress, there was a new voice of a man on the line. I said to him, ‘My name is David Rose, if I just knew who I was talking to, it might help me diffuse the situation, get some of the folks out of here and start drawing this thing down." The man on the phone said, ‘This is Matt.’ I replied, "Thank you, Matt."

Now that deputies know who they are dealing with, they can begin to research his history and start to assess his state of mind. "There's not just the behaviors that the victim, or the suspect, or the barricaded person is displaying, but really, also the psychology of the situation and what a crisis does to a human being just in general," said Kroll. Her evaluations can help guide the negotiations and convince people in crisis that they are there to keep them safe. "And, as long as you talk to us, as long as you cooperate with us, as long as you decide to do what we say, things are going to be okay."

In the end, the suspect voluntarily surrendered, which is CNT's ultimate goal to get them the help they need. "There's a lot of technology here. There's a lot of knowledge, a lot of expertise, but all of it is here to save somebody, so when we're able to accomplish that, absolutely, you know, we're happy, we're proud and hope that we can do that each and every time we're called out," said Dep. Winters.