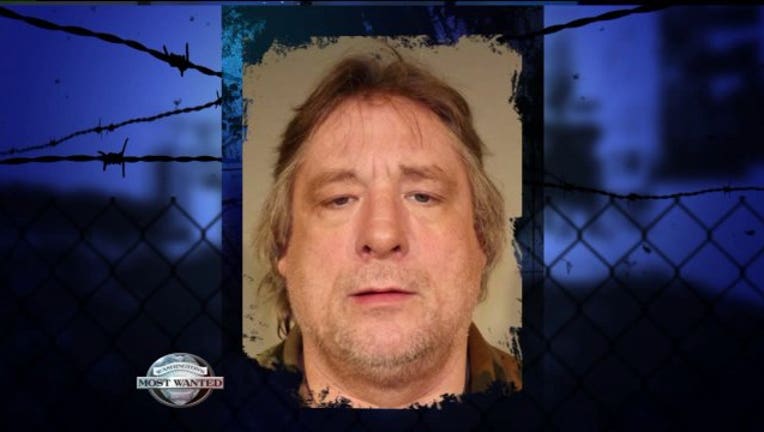 FUGITIVE CAPTURED May 11, 2014 -- Kirkland police say convicted child molester, Kevin Crowder, was arrested after being tased when he ran from officers on Sunday. Kirkland police got anonymous tips from Washington's Most Wanted viewers who saw him featured Saturday night, that he was camping in the woods near Forbes Creek Drive. Officers found him standing on a trail. He ran from them and a short chase ensued. Officers say he was tased and taken into custody. He was wanted for two warrants by the U.S. Marshals Sex Offender Investigation Branch for failure to register as a sex offender. “The U.S. Marshals, and particularly the Sex Offender Investigations Branch, is extremely grateful to the Washington public and to David Rose and Washington’s Most Wanted for once again helping get a dangerous sex offender off the streets of our community," said U.S. Marshals Service Chief Inspector Tom Lanier. "The partnership between WMW, the public and all of law enforcement in our community continues to be a tremendous success and contributes greatly to keeping our children safe from dangerous sexual predators. Crowder was convicted of molesting a 12 year old girl. FUGITIVE WANTED BY U.S. MARSHALS May 10, 2014 --  U.S. Marshals say this fugitive is a high-risk child predator who's living in the woods somewhere outside of Seattle. Officials say Kevin Crowder molested a 12-year-old girl in Clallam County. Deputies say Crowder slips into the city when he needs supplies, to clean his clothes and possibly to look for his next prey. Crowder is a level three sex offender, the highest risk to re-offend. He is wanted on two federal warrants for failing to register, and by the state for breaking probation on his conviction in Clallam County several years ago. "He has multiple FTR, multiple DOC violations. He was actually arrested in Montana by the U.S. Marshals back in 2009, and did 3 years in federal custody for FTR. Once again, Mr. Crowder has FTR'd and he's a perfect example of why the Adam Walsh act was passed, that offenders cannot go from state to state to avoid registration laws without the U.S. Marshals looking for them," said Chief Inspector Tom Lanier of the U.S. Marshals Service. When Crowder was caught in Montana, he was living in a national forest near Bozeman. He last registered as homeless in King County. Marshals say he is likely living out in the woods around Seattle. Kevin Crowder is 55-years-old and has also been busted for illegally having a gun. If you know how to help the u-s marshals sex offender investigations branch find this high-risk sex offender, call an anonymous tip into: CRIME STOPPERS: 1-800-222-TIPS You must call the Crime Stoppers hotline with your tip to be eligible to receive a cash reward for information leading to a fugitive’s arrest. CLICK HERE for information on how to TEXT A TIP to Crime Stoppers