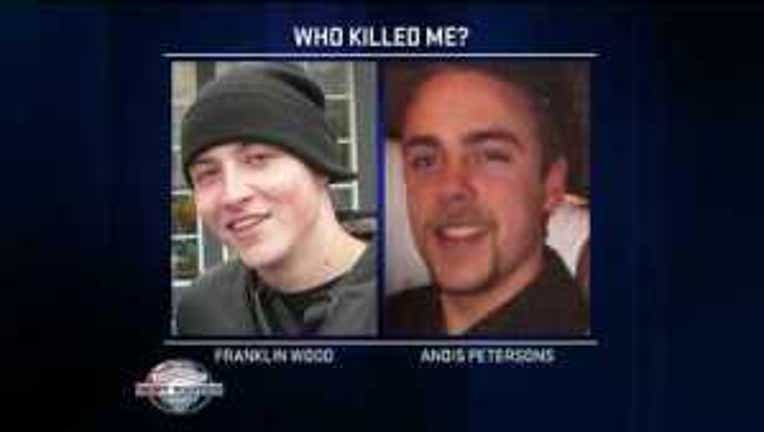 They are two of the faces on billboards and bus ads all over Seattle asking, 'Who Killed Me?’ The goal is to keep the faces of murdered victims in the public so people who may know something will come forward. The double murder of Franklin Wood and Andis Petersons is one of these cases, and police say with your help -- it can easily be solved. It was a cold, wet night on January 11, 2010. Three roommates sharing a condo in Seattle’s Northgate area heard a knock at the door just before midnight. Seattle Det. Jason Kasner says what happened next was fast and brutal. “We believe that after the first roommate opened the door, Mr. Wood was on the second floor. He was contacted first. There was some sort of a fight, then he was shot. And then Mr. Petersons was upstairs and that’s where they contacted him.” Andis Petersons and Franklin Wood shared a condo with another man. At the time of the shooting, Wood was just three days shy of his 19th birthday. His father, Stephen, describes him as protective of his little sister and lots of fun. “He was energetic. He was funny. He was thoughtful. He could appear to be tough, but he was pretty sensitive." Petersons was  just 20 years old, and his parents only child. Pete and Shelly Petersons say, “If someone asked a favor, he’d be there to help him out.” But after the horrible home invasion, Wood and Petersons parents were contacted and told to head to the hospital. “Franklin had been taken to the emergency room, and at the time we had been told that two boys had been shot, and were critical,” explained Stephen Wood. But neither boy survived. Andis’ mother, Shelley, recalls, “I just had this funny feeling and I said, ‘don’t you tell me that my son is dead. She shook her head yes and I think I just lost it and started screaming in the elevator.” The surviving victim told police the two attackers were wearing masks, and the third covered his face. But, as they were leaving the condo, a friend got a look at one of  them. “The person that was coming here to visit the roommates, a female, actually confronted one of the suspects," says Det. Kasner. "She was pulling in. They were coming out, and she was punched in the face by one of the suspects.” She was able to help police create a sketch of the man who hit her. That sketch is all detectives have to go on, other than the belief that the attackers were familiar with the condo. “All indications are they knew what they were looking for. They’d probably been here before, or maybe knew someone who had been inside before. So, definitely not random,” explains Det. Kasner. Andis and Franklin’s parents hope someone who knows something will come forward. “We have good things happen," says Stephen Wood. "But Franklin’s grief -- no matter how good things are -- we’re always carrying the sadness that Franklin’s not with us. We can’t see what he’s doing with his life and the things he’s excited about. You don’t get to share those joys or those moments, and so there’s always this continual grieving in the middle of ordinary life”, Shelley Petersons added “I just want somebody to talk. Help us if you can. If you can, please help us.” Franklin’s parents have set up an endowment at Seattle Central Community College under their sons name. It's for students who are going into Graphic or Apparel Design and Photography. CLICK HERE to donate, and for more information. If you know anything about the murders of Franklin and Andis, or have information on any of the other 'Who Killed Me?' call the Seattle Police Department’s Homicide Tip Line: (206) 233-5000 Or you can call or text an anonymous tip into: CRIME STOPPERS: 1-800-222-TIPS You must call the Crime Stoppers hotline with your tip to be eligible to receive the cash reward for information leading to a fugitive’s arrest. CLICK HERE for information on how to TEXT A TIP to Crime Stoppers