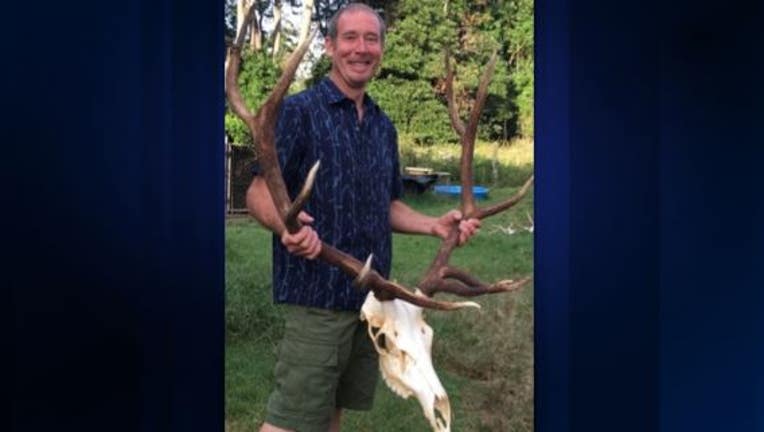 GRAHAM - Who killed 44-year-old Trevor Guthrie in his home in Graham? “His body was right at the front door. You could see that he was curled-up in the fetal position. Where he laid was the majority of the blood, but there was also blood in the front room, on the TV, in the kitchen under the table and all over the walls,” said his younger sister, Tiffani Guthrie.

The father of two had been brutally beaten and possibly strangled. The Pierce County Medical Examiner ruled it a homicide. The cause of death was asphyxiation and blunt force trauma. There were no drugs or alcohol in his system. He had multiple blunt force injuries, the most significant of which involves the soft tissue of the anterior neck. There was a fractured nasal bone with overlying laceration, multiple bruises, lacerations on his face and lips, contusions on his right hand, both elbows and abdomen, extensive scalp hemorrhage and bilateral periorbital hematomas also known as ‘raccoon eyes’ which are often the result of a basilar skull fracture.

“I know he had to have put up some kind of a struggle, because the trim on the doors were broken off and there was wood laying on the kitchen floor from either being kicked, had to have been kicked, or something, because it was broken and split in pieces,” said Guthrie.

It’s a murder mystery you probably never heard much about as Pierce County Sheriff’s detectives kept the details of the homicide close to the vest while they worked to solve the case.

Trevor was murdered four days before Thanksgiving in 2017. His girlfriend found him on November 19, 2017 after she couldn’t reach him by phone.

“That day will always stick with me. I remember it like yesterday,” said Trevor’s niece, Elysia Robbins. She went to her Uncle Trevor’s house after  getting a call from her mom that something was wrong. “His girlfriend came up to me and she was crying, she was telling me he was dead. I couldn`t process it, because I was in shock,” said Robbins.

Trevor grew up in Graham and lived there his whole life. He had the same friends since junior high school. His family all lives down the same dirt road and he was more than a proud dad to his two kids. He was their best friend. He was looking forward to seeing both of them graduate from college. His family says Trevor loved woodwork and spent 10 years at a sawmill before starting a gas piping business. His passion though was antler shed hunting. “He could tell you a story on every one he had. Put them all on the porch and we were like, ‘Wow, that`s a lot of antlers that he had.’ That`s his pride and joy,” said Guthrie.

By all accounts, Trevor was exactly what you see in his family photos: A kind man with a ready smile who loved the outdoors and was always willing to lend a hand to help out, which is why his murder makes no sense at all to his family. “He had such a good personality that even if he made somebody mad on accident, they were all friends with him the next day,” said Guthrie.

Guthrie and her boyfriend cleaned-up the crime scene after the detectives were done in the home, so Trevor’s kids wouldn’t  have to see it. Then, they waited. Detectives asked them not to talk about the case publicly, so as not to tip off the killer or killers. Now, almost three years later, none of the physical evidence has led to an arrest in the case. Guthrie says they want people to know that Trevor’s life mattered and they’re offering a $5,000 reward for information that leads to an arrest.

“This is one of those ones that`s basically a who done it and why?” said Pierce County Sheriff’s Det. Ed Troyer.

Guthrie says Trevor spent the last day of his life working a side job, then he  met up with some friends before stopping by her home. She wasn’t there, so he headed to his house nearby. That’s where the case gets even more baffling. Trevor hardly ever slept in the home he rented. He normally stayed at his girlfriend’s house. Also, the home is not visible from the road, so detectives don’t believe this was a random killing. “This is somebody who went there, knowing who was there and committed a homicide,” said Det. Troyer.

But, what was the motive? Nothing appeared to have been stolen from his home. His money was still in his wallet in his truck parked out front. “We can`t find anybody who would want to do this to him. This was not a robbery. He didn`t have enemies,” said Det. Troyer.

So, detectives need a new angle to purse, to learn something about his life they don’t already know. They need the public’s help. “I really feel like somebody in our area knows something,” said Guthrie, who thinks there are still plenty of people detectives can talk to who might have the information to solve his case and bring some peace to Trevor’s mom, Kay Snopko. “Well, in my life right now, I can’t move on,”  said Snopko. She tries  to remember all the good things about her son but it’s hard to stop imagining the pain he endured. “I`m asking the public, if they know anything, please tell your truth. We need to move on,” said Snopko.

The family has started a GoFundMe and are trying to raise more money for the reward. They’d planned to sell raffle baskets before COVID-19 hit. They’re  doing all they can  to raise awareness that Trevor’s killer, or killers are still walking free.

“You don`t see vicious murders very often and this was a bad, vicious murder,” said Robbins. She wasn’t even a year out of high school when her Uncle Trevor was murdered. It’s hard for her to ever feel safe again. “Before I go to bed, I have like a 15 minute routine. All my windows are locked. The doors are locked. The sticks are in the sliders. I make sure I go upstairs. All the lights are off, the windows are locked. It takes me like 10 minutes before I`m ok, I feel like I’m safe, I can go to bed and even then it`s still in the back of my mind. I think about him all of the time. I think about how that person just gets to live on and not feel guilt for it,” said Robbins.

Trevor wasn’t the kind of person who wrote letters but he was happy about the success of his business. He sent a letter to his grandmother. “He wrote a letter to my grandma and said, ‘Hey, I just want to tell you I love you and I`m doing really good and I`m starting my business’ and he sent her $40 and said, ‘Go have dinner on me’ and the day of the funeral, she received it and she wasn`t able to come up to the funeral, so it was heart-wrenching,” said Guthrie.

Does the letter show he had some sense he was in danger, or no inkling of what was to come? It’s another of the many questions Guthrie asks herself. In the days, weeks and months after her brother’s murder, she looked at everyone as a possible suspect, but can find no reason that anybody would want to hurt him. She’s hoping somebody will come forward with the answers they need.

If you have any information to help Pierce County Sheriff’s detectives identify people to interview, or avenues of investigation to explore, or if you can identify a suspect, you can remain anonymous. Submit a tip to Crime Stoppers of Puget Sound by calling 1-800-222-TIPS(8477). You will never be asked to give your name. You can also text tips through the P3 Tips app that you can download to your cell phone for free or go to www.P3Tips.com