ARLINGTON, Wash. - There's no excuse for the kind of terror an armed robber unleashed when he threatened to kill a woman while holding a knife to her throat.

It's just one of three armed robberies that Arlington Police say he committed between July 19 and July 23.

The suspect is short, about 5-feet, 5 inches to 5-feet, 8 inches tall. He was carrying a longboard skateboard during the first robbery at the Shell gas station on 72nd Street NE and similar clothing - along with a fanny pack - for the second robbery the next night at Smokey Point Motor Inn.

He used a knife to threaten to kill employees in all three cases.

Fortunately, the Shell gas station has a good surveillance system with audio, so detectives hope you recognize his voice.

"So we're asking the public if they can take a look at that video, look at the way he walks and listen to the way he talks. Somebody's going to know this guy and somebody might be able to help us identify him," said Sgt. Peter Barrett. 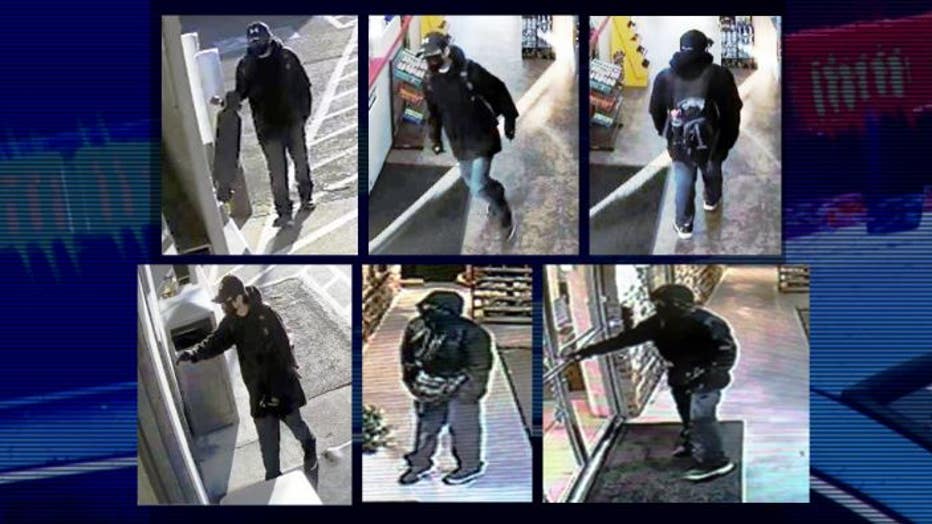 Barrett says in all three robberies, the suspect caem in fast - in and out with stolen cash in less than a minute.

"One of the things we're most concerned about is the suspect is incredibly aggressive, violent. Each of the robberies, he's going in and holding the knife up to the necks of the victims very aggressively. It's a fairly good-sized knife," he sayd.

And it doesn't seem to matter that the clerks are no threat to him.

"Two of our three victims are in their most vulnerable stages of life. We have a teenager as one of the clerks at the pizza store and a lady in her late 60s, early 70s running the cash register at the Shell," Barrett says.

Detectives are asking anyone who works at night to be vigilant and to check surveillance cameras for any video of him.

"One of the things that's unique about this suspect and especially on the Shell gas station robbery that he committed, he showed up with a fairly distinctive longboard skateboard, so we're asking the public if they can take a look at that it might make a connection where they're able to help identify them."

Detectives don't know if he's local but he did leave on foot every time, so they think there is a good chance somebody can help identify him before he terrorizes - or hurts - another victim.

If you think you know who that voice belongs to or where Arlington Police can find the suspect, submit an anonymous tip to Crime Stoppers of Puget Sound. It's anonymous and you will get a cash reward of up to $1,000.

Call 1-800-222-TIPS or send the information through the P3 Tips app on your smart phone.