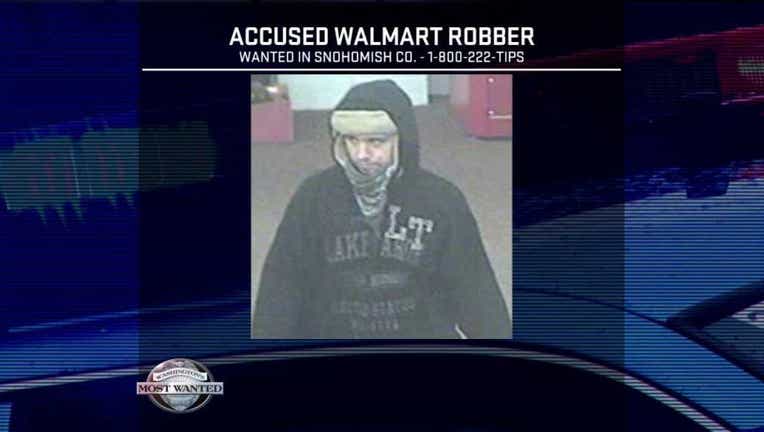 Seems Walmart's low-prices weren't enough for a robber caught on camera at the super-store in Lynnwood late last month. Detectives say the guy went into the store at 2:30am on October 26th, threw down a couple of bucks and either some candy or gum on the counter so the clerk could open the register, then handed her a demand note threatening to have a gun. The clerk put the cash in a plastic bag, handed it off, and the robber took off. Retired Seattle Detective Myrle Carner with Crime Stoppers of Puget Sound says he was so calm and collected, two people stood behind him in line, not realizing what was going on. In fact, right after the robber left the register, the customer behind him simply stepped up and put down his items on the counter like nothing happened. Detectives say while he threatened to be armed, he never showed a weapon. Here are the details on the accused Walmart robber:

You can buy a whole bunch of stuff at Walmart with the reward money. If you know who this guy is, call an anonymous tip into: CRIME STOPPERS: 1-800-222-TIPS You must call the Crime Stoppers hotline with your tip to be eligible to receive the cash reward for information leading to a fugitive’s arrest. CLICK HERE for information on how to TEXT A TIP to Crime Stoppers