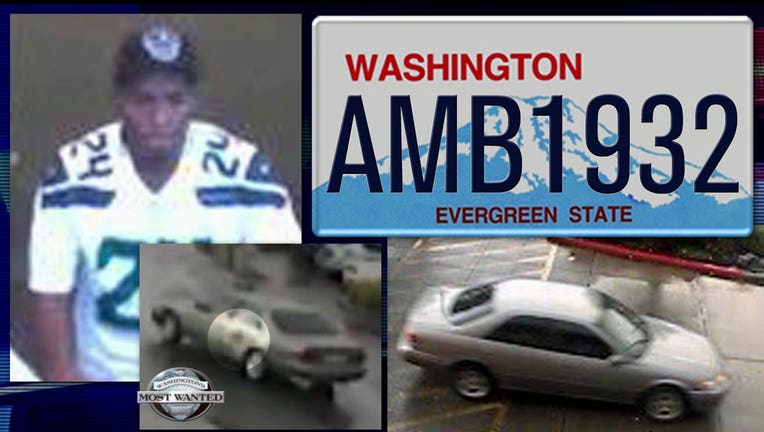 WANTED IN RENTON -- Wouldn't it be great to get a new television for Christmas? The really nice ones are cheaper than they used to be but can still be pricey -- and this violent thief is the reason why. Take a good look at the crook wearing a Marshawn Lynch jersey -- maybe he was trying to steal the 50” Vizio to watch the Seahawks play. Renton police are hoping someone knows his name. Detectives say he cruised right to the back of the Target store and headed into the stock room. Over the next several minutes he kept sticking his head around the corner looking to see if the coast was clear, then moved quickly to the rack and grabbed a Phillips speaker system and put it in a shopping cart and pushed it right out the door -- but he wasn't done. The video show him coming back an hour later wearing a black baseball hat and a black windbreaker. Again, he goes to the stock room and steals the television – Only this time, store security was on to him when he took off his jacket and they saw the Seahawks jersey. The camera followed him as he headed for the door. As he is just about to get out the door, Target security tried to stop him. He pushed the officer back and took off, leaving the television behind. “The effect of shoplifting is not just one television gone or one loss prevention officer shoved,” says Terri Vickers with Renton police. “The effect of shoplifting is increased prices for everyone and that affects all of our holidays. I think the guy's a grinch."

If you recognize him or the gold Toyota Camry he was driving with Washington license plates ‘AMB1932’, call an anonymous tip into: CRIME STOPPERS: 1-800-222-TIPS You must call the Crime Stoppers hotline with your tip to be eligible to receive a cash reward for information leading to a fugitive’s arrest. CLICK HERE for information on how to TEXT A TIP to Crime Stoppers