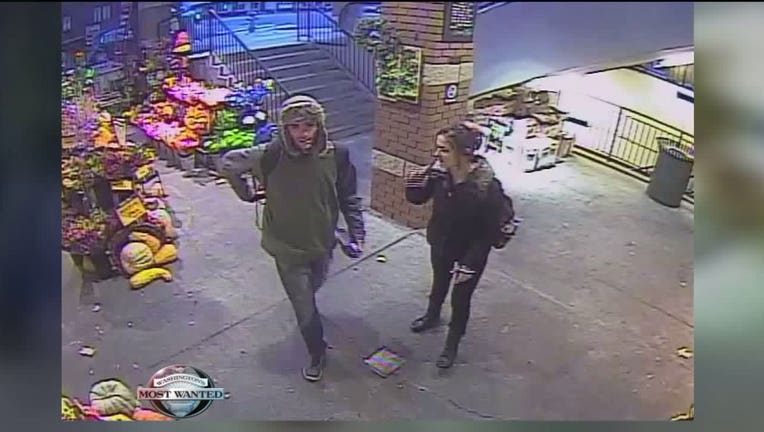 WANTED IN SEATTLE -- Seattle Police are hoping you recognize a couple who threatened to shoot a security officer. Watch the video below from the Metropolitan Market on Mercer St. Detectives say the couple you was spotted stealing things and then when security tried to stop them, the male suspect told them he had a gun. The security officers didn't believe him, so they continued to follow the couple. “The suspect then pulled out some scissors and he held them in a threatening manner and security personnel kind of backed up and then he dropped the scissors he actually grabbed a bolt cutter that they had stolen, about two feet long and started swinging it around,” says Ret. Det. Myrle Carner with Crime Stoppers of Puget Sound. So, the security officers backed off and now Seattle Police are hoping you can help identify the couple.

Both appear to be in their 20's. He was wearing a green hoodie with a fur-lined winter hat, jeans and black shoes with a white edge. Detectives think he’s 6'1" to 6'3" with a slim build and a scruffy beard. Detectives think she is 5'5" to 5'7" with a slim build and dark brown hair. If you know their names, call an anonymous tip into: CRIME STOPPERS: 1-800-222-TIPS You must call the Crime Stoppers hotline with your tip to be eligible to receive a cash reward for information leading to a fugitive’s arrest. CLICK HERE for information on how to TEXT A TIP to Crime Stoppers