WANTED BY PIERCE COUNTY SHERIFF'S DEPARTMENT --  Help police take down this fugitive -- a shoplifter who turned a minor crime into a violent confrontation. Police say his jacket is clearly stuffed with items he was trying to steal from the Wal-Mart in Spanaway. A loss prevention officer stopped him and moved him back into the store, but the thief faked him out and made a run for it. The officer stayed on him and there was a struggle as they went out the front doors and the fight was on. A second loss prevention officer joined in to help, and that's when police say the shoplifter started slashing at them with a folding knife - striking one of them several times with it, but luckily the crook never got the knife open, so no one was hurt. They let go of him when detectives say he tried opening the knife and threatened he had a gun. "This is not your average shoplifter," said Pierce County Sheriff's Detective Ed Troyer. "Somebody who arms themselves with a knife, then uses it and assaults a store employee is somebody who's ready to fight if confronted. It's obvious he was taking things and leaving the store by the photos, but what makes this guy dangerous is the fact he struck the employee many times, and he was willing to do so, and he threatened to have a gun. This is somebody that was ready to use force if necessary, and he did, turning this into an armed robbery which now has elevated this crime and makes this person dangerous. We're sure he's making his living off doing this, and we don't want anybody else to get hurt." 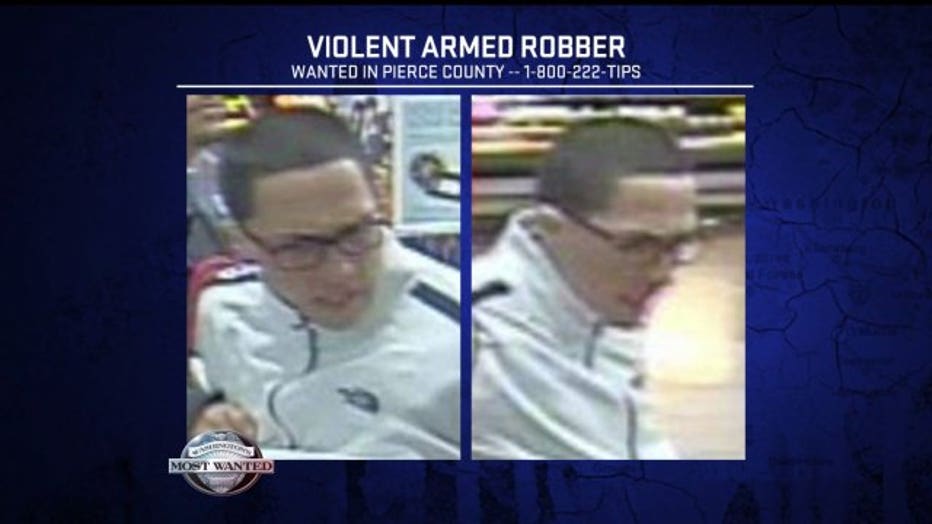 The suspect is white and in his 20s,  about 5-foot-8 with a slim build. He was wearing black rimmed glasses and a white track jacket with a dark blue stripe down the sleeves. If you recognize him and can tell Pierce County detectives anything that can help get him identified, call an anonymous tip into: CRIME STOPPERS: 1-800-222-TIPS You must call the Crime Stoppers hotline with your tip to be eligible to receive a cash reward for information leading to a fugitive’s arrest. CLICK HERE for information on how to TEXT A TIP to Crime Stoppers