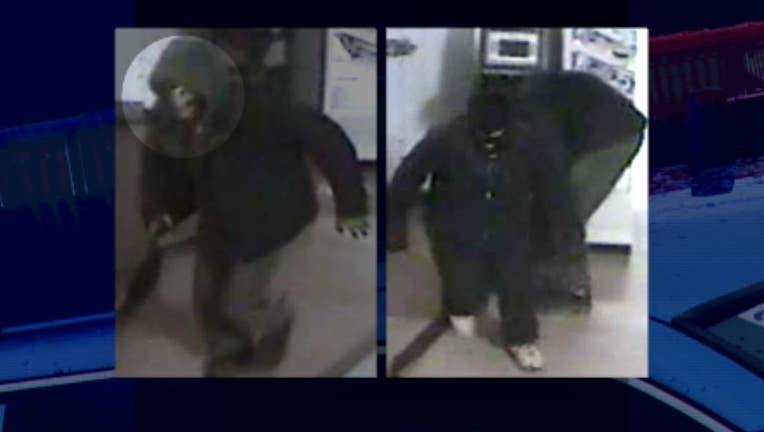 WANTED IN PIERCE COUNTY -- These two fugitives failed at their crime -- but the damage they caused at a mom and pop grocery store when they tried to steal an ATM is heartbreaking. Watch the video as the suspects ram a stolen car right through the front doors of the "Kapowsin Grocery Store" in Graham on the day before Christmas Eve. From there they climb inside and you see them start tying a really thick strap to the ATM machine that's against a back wall.

They're well-disguised and it seems like they might pull off their plan -- until their strap busts off the back of the car because the cash machine was bolted to the floor. The video shows the moment they try to drag the ATM out. The strap quickly tightens-up, then falls limp towards the ground. During the attempted theft, the car almost backed over one of the crooks before the two crooks took off empty handed. Detectives say even if their plan to pull it out had worked -- they still would have failed. "Once you get those machines and you try and get the money out of them, you can spend days and days with all kinds of equipment and not be able to get into them and get the money. They're probably going to get caught because those are all electronic and we can find them,” says Pierce County Det. Ed Troyer. “If you heard about these guys talking or bragging about this heist or making plans to do this, we want to know who they are, because they still did a lot of damage, they stole a vehicle and they think they might be able to get away with it by trying it again and we'll have more damage and possibly one of them will get hurt. As you see in this video, guy almost backs over his own partner, so they're lucky that they didn't get hurt.” One of them was wearing what looks like a black and white skeleton mask. The other has on one of those robber-like ski masks. The tan 1993 Honda Accord they ditched right after their epic failure was stolen from a house in Graham the day before the burglary. Maybe these guys talked about their big blunder at a bar or somewhere else out in public. Wherever you may have heard something about it -- or if you think you know who they are, call crime stoppers at 1-800-222-tips, call an anonymous tip into: CRIME STOPPERS: 1-800-222-TIPS You must call the Crime Stoppers hotline with your tip to be eligible to receive a cash reward for information leading to a fugitive’s arrest. CLICK HERE for information on how to TEXT A TIP to Crime Stoppers