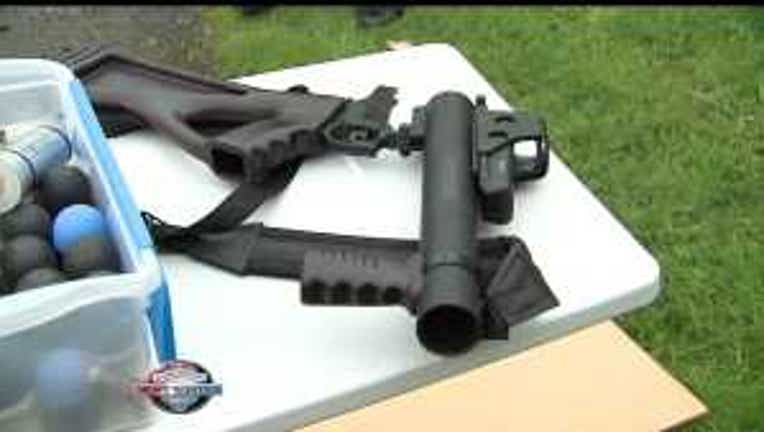 As law enforcement agencies look for non-lethal ways to deter dangerous criminal activity, there are non-ballistic weapons being tested and used. Rick Wyant with 'CRT Less Lethal' helped develop and test some of these high impact rounds. "It’s constantly changing and evolving. The idea is you want to deter a criminal activity without inflicting serious bodily injury." Showing Parella a set of large rubber bullets, Wyant explains, "These are designed to be more precise than a bean bag round and with lots more options. There are some that have pepper spray in them, some that have a malodorant in them so you smell like a sewer once you’ve been hit with it, so it not only makes you want to leave, but everyone around you.” And to test that bodily injury, there are three volunteers ready to be shot by these gel-filled rounds of ammunition. Allan Ezer described what he thought the hit would feel like prior to being shot. "I was Charlie horsed many times as a kid, so I think something in and around there." But apparently the pain was more intense. After releasing an explicative, he was told to “walk it off” by Wyant standing nearby. A few seconds later, Ezer described the pain saying, “I got drilled by a slap shot with a hockey puck. That’s what it feels like.” But there’s a lot more than shooting volunteers that goes into testing something like this. Scientists start with ballistic gel and soaps.“Our guidelines are if it doesn’t penetrate more than a couple of  inches, which it didn’t, and our volume displacement is within reasonable ranges compared to other rounds we’ve tested, then we give the green light to do human volunteers,” Wyant said. “When we shoot people you can see the wave motion go through their skin. You’ll see that on this ballistic testing.” One by one the three volunteers lined up to be shot. And one by one the impacts were shown to be different. Daniel Espinoza described the pain level as a two, but was quick to explain he has a high tolerance for pain. When asked if this form of defense would deter him from continuing in criminal behavior, he said “yes.” And the final volunteer is Seattle police officer Michael Virgelio, who was taking one for the team explaining, “I kinda keep reminding myself that it’s going to benefit officers in the future to figure out the flaws and the positive effects of these rounds so I’m just kind of keeping that in mind for now.” A few minutes later he was shot in the leg and agreed that the level of pain felt was a deterrent for him to stop doing whatever he was doing to get shot. He described the pain level as a “10.” All men agreed that this would work to deter them from causing trouble-all without the long-term effects of an actual bullet -- and that’s what these weapons of the future are all about. Tom Burns is vice president of 'CRT Less Lethal', and says the company has already filled two orders from foreign agencies and will soon have it on the market for purchase all over the world.