WANTED IN GRANT COUNTY -- Two store clerks and a customer were tied up and terrorized by a group of armed robbers in Grant County. Cameras were recording at Sandoval's Market in the city of George last Thursday night when four masked men rolled up in a SUV that detectives say was stolen from the Tri-Cities. They rush in the front door, all with guns drawn. The last guy plays lookout -- hanging back, peering out the window, and nervously pacing around the door. One guy heads to the cash register and cleans it out, while the others tie up the two workers and keep watch over them. The workers are on the floor and out of the camera's view, but you can see one of the men holding them at gunpoint. Detectives say the customer that also got tied up came into the store while it was all happening. Once it was over, the suspects all took off and ditched the SUV down the road. "These guys were precise," said Kyle Foreman of the Grant County Sheriff's Office. "These guys each had a duty and responsibility. It was very well-planned-out." 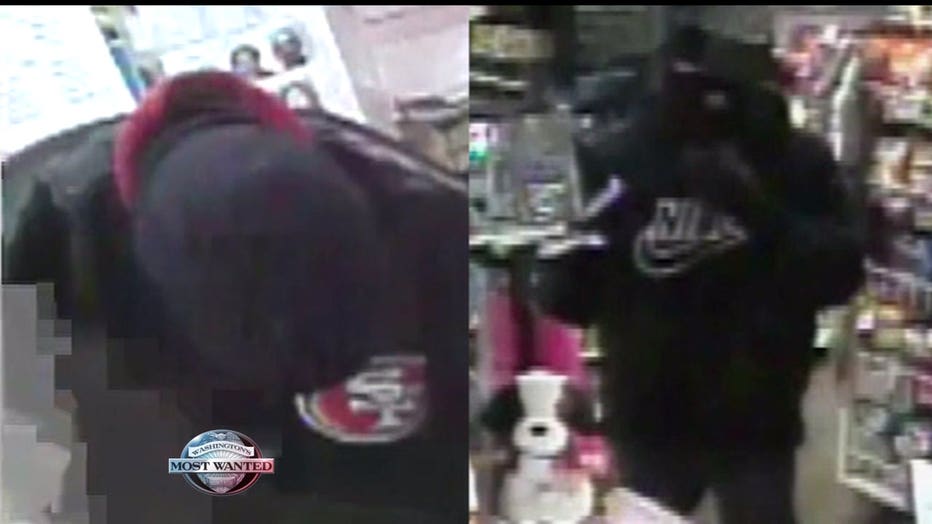 The four were all well-disguised, but check out the one suspect's black jacket with the "San Francisco 49ers" logo on it -- or the other guy's black sweatshirt with the Nike swoosh logo. Detectives hope those clues could help someone recognize these guys. If you know anything that can help catch them, call an anonymous tip into: CRIME STOPPERS: 1-800-222-TIPS You must call the Crime Stoppers hotline with your tip to be eligible to receive a cash reward for information leading to a fugitive’s arrest. CLICK HERE for information on how to TEXT A TIP to Crime Stoppers