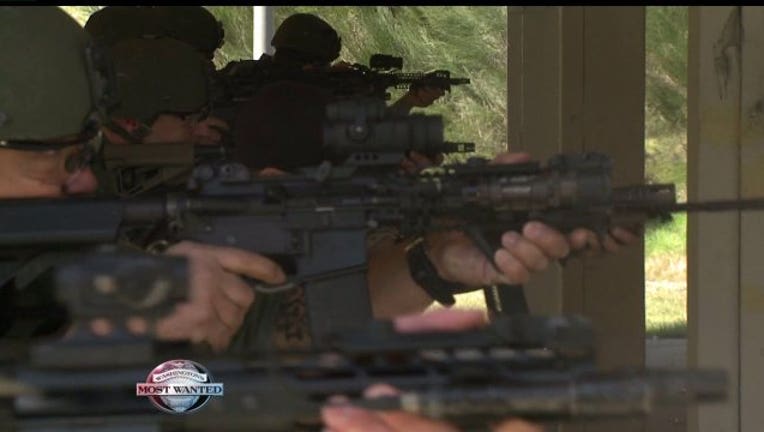 KING COUNTY -- SWAT -- or Special Weapons and Tactics teams -- are always on the front lines of danger, so training hard isn’t an option. ”If things get really bad, you call the swat team,” says Darrion Holiwell,, chief firearms instructor for King County SWAT. “Tac 30” as they’re also known has twenty-one officers who answer about 100 calls a year. But in between those calls is a ton of training. “We’re really big on getting our heart rates up because normally when you do a swat hit, your heart is a little bit elevated so we practice that by running, stopping, shooting  and creating what we call stress inoculation,” explains Holiwell. They’re also one of the larger swat teams in the state of who have “toys” exclusive to their agency such as a helicopter used for fast roping and other tactics. The group of men range from those who are relatively new to the agency to veteran officers like Sergeant JK Pewitt who’s been in law enforcement for over three decades. He explains, ”Things have gotten much worse in the thirty-five years I’ve been with the department as far as suspects being better armed, better trained, wearing body armor.” It takes  a lot of physical strength and skill to be a part of  this unit, but inside this close knit group is a lot of heart for those they protect. “If we don’t adapt to what the criminals are doing, then we’re going to lose and if we lose, the community loses,” Pewitt says. But that’s not going to happen on their watch and that’s why they train this hard; to serve and protect and send a clear message to the bad guys. Holiwell sums it up by saying,“Bad guys, we’re a gang too. A well -equipped gang and a well -trained gang as soon as they unleash us, go hide; guaranteed. We’re coming to get you.”