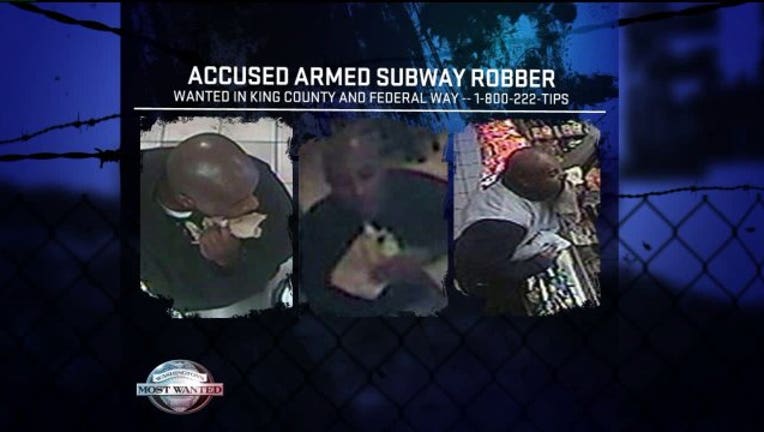 We've seen a bunch of armed robbers with some pretty strange disguises, but nothing like the guy accused of hitting two Subway restaurants in King County -- putting a paper towel in front of his face that he'd grabbed from the sandwich shop's bathroom. It happened earlier this month in Federal Way, where detectives say he had a gun in his waistband that he flashed to the worker, before grabbing cash from the register and taking off. In the second Subway robbery he's accused of that happened last month in Newcastle, he used a much larger towel for that heist. He didn’t flash a piece in this hit, but kept his hand under his sweatshirt the whole time too -- threatening the Subway worker that he has a weapon, before heading to the register for the cash, and out the door. His anxious demeanor gives cops concern. “In both these cases, if you look at the suspect, he appears to be very anxious,” says King County Sgt. Cindi West. “He's moving around, looking around, fiddling with his clothes, possibly the weapon under his jacket. We're very concerned he might escalate on the next one. We really want to catch this guy, get him off the street before he tries to take the next step." If you recognize him, call an anonymous tip into: CRIME STOPPERS: 1-800-222-TIPS You must call the Crime Stoppers hotline with your tip to be eligible to receive a cash reward for information leading to a fugitive’s arrest. CLICK HERE for information on how to TEXT A TIP to Crime Stoppers