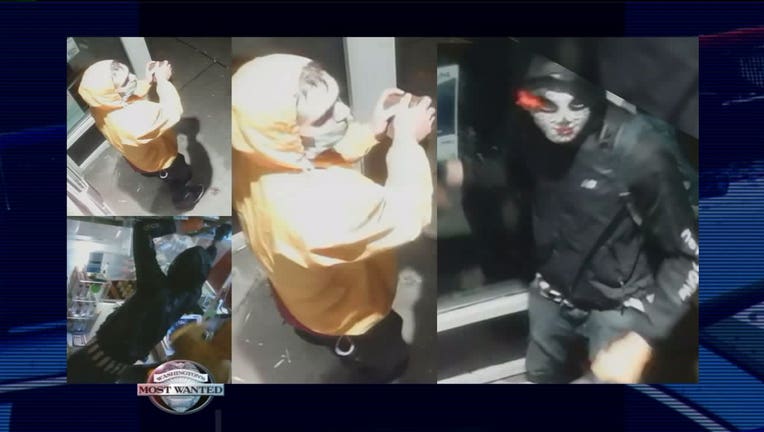 WANTED IN SEATTLE - The victim of a small grocery store on Capitol Hill was hit hard by thieves early last Saturday morning, after they smashed-out his glass and stole several thousand dollars’ worth of merchandise.

Suspect #1 one was wearing some kind of mask, maybe horror or anime?

You get a much better look at Suspect #2.

Both were wearing gloves.

Seattle Police are hoping you can help identify them.

Surveillance video shows the guy in the mask standing outside King of the Hill Grocery on E. Olive Way takes a brick and taps it against the glass, before quickly turning away to see if the coast is still clear. Then, he takes the brick and hurls it against the window, but it just bounces off and breaks into pieces. He doesn't give up and starts throwing them at the glass, but still can't shatter it. “Finally, the second suspect, he kind of takes over and he takes the brick and he takes it with both hands, like he is throwing it with more force. He actually makes a dent in the glass and then another throw and the glass breaks and you will see the suspects go up and they take the glass and shove it out of the way and then the two of them enter the store,” described Ret. Det. Myrle Carner with Crime Stoppers of Puget Sound.

They headed straight for the cash register and the cigarettes. "According to the report, about 26 cartons of cigarettes, equivalent, was taken. You watch them put it into backpacks that they actually carried in. Once they get everything packed up, they go right back through the broken glass door that they entered through,” said Ret. Det. Carner.

Fortunately, the victim's surveillance camera did get some good images of the suspect in the yellow jacket. He's white with blond hair. Detectives are hoping somebody can identify him. Police say he was seen riding a bicycle.

“Here we have a small grocery market just trying to make a living in this environment that we are in. You got damage to your store. You're missing stuff. This is ridiculous. Somebody knows these guys and we need that information,” said Ret. Det. Carner

With the distinctive-looking mask on the first suspect and the decent look at the blonde-haired suspect, somebody can surely cash-in and get the reward. Crime Stoppers of Puget Sound will pay you up to $1,000 per suspect if you can help detectives identify them. Call 1-800-222-TIPS(8477), or text a tip through the P3 Tips app on your cell phone.