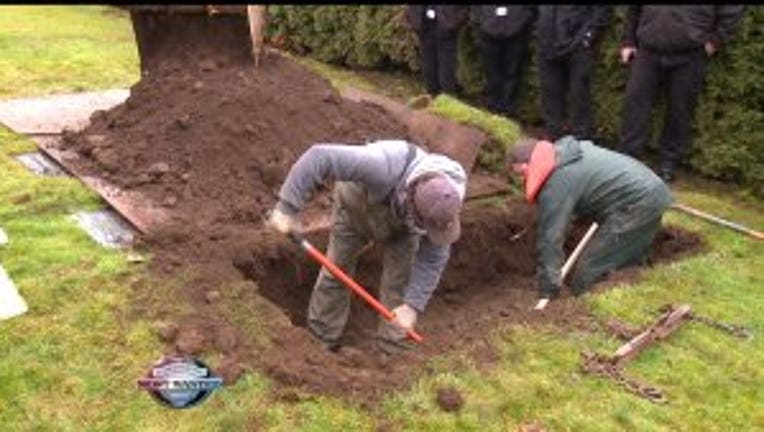 It was May 14, 1991, when one semi truck near Kalama, Wash., ran into the back of another one, causing an explosion. “The scene was horrific,” explains detective Greg Wilcoxson with the Washington State Patrol. Two people died in the crash -- Lester Harvel, 26, and a woman riding with him who police have never been able to identify. “We are here today as a result of trying to determine who the unauthorized passenger was,” Wilcoxson said. Both he and Sgt. Stacy Moate have been working for months to get the remains of the unidentified woman exhumed. “I just felt it was our duty to pursue this and try and get some closure and justice and, hopefully, to find some family to send her home to,” Moate explained. After  22 years in an unmarked grave at Longview Cemetery, in an area prone to flooding, the rusted casket proved to be a challenge to open. Cemetery workers tried to pry open the lid with a shovel. In the end, firefighters had to saw it open, but even that was no easy task. When they finally succeeded, investigators discovered the coffin was half full of water. The good news is that the remains were intact enough for identification purposes. Wilcoxson adds, “We’re here today to use modern technology, specifically hopefully DNA, to be able to exhume the body and be able to do a facial reconstruction on her skull, as well as to be able to use that information in trying to determine who she is and hopefully notify the family.” Police do have a big clue in helping to identify this woman. Just moments before the crash, a witness got a good look at her inside the truck and described her as younger, possibly Native American, with high cheek bones and long brown hair. The medical examiner was also able to add that she had severe scoliosis with a convexity to the right. Detectives will now send the remains to a University in Texas lab that specializes in getting DNA from bones. The goal is to upload those findings into a national database for missing persons and hopefully get an identification. Wilcoxson adds, “It’s taken awhile to get to this point. I’ve interviewed a lot of people, I've contacted a lot of people -- even today I’m learning of people that I will follow up with, but to get to this point today is a great feeling and I know that we’re working and trying hard to figure out who she is.” Because investigators believe she may be Native American, members of the Puyallup Tribe performed a sacred blessing for her and left a gift with her remains that they believe will help her spirit in the journey ahead.