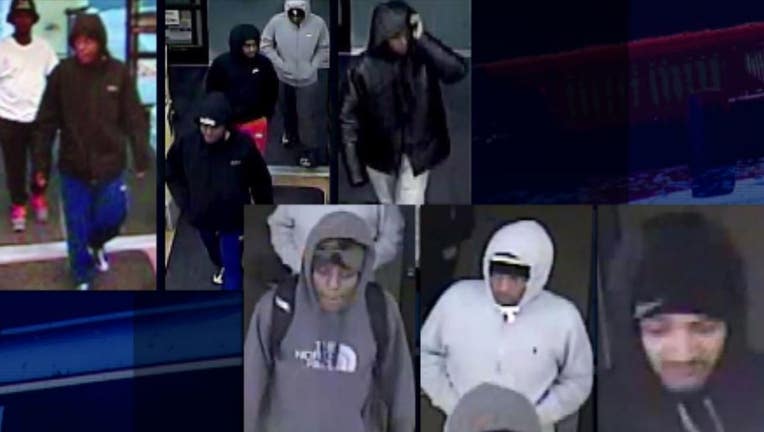 WANTED BY SEVERAL POLICE AGENCIES -- The drug called ‘Sizzurp’ that musical artists like Three 6 Mafia rap about is called Promethazine -- a highly powerful cough syrup with the narcotic codeine in it -- and police say it's the top target for a crew of armed robbers who need to be identified. Detectives say there are at least three suspects hitting pharmacies throughout Western Washington. The surveillance photos you see above came from a Rite Aid in Bellevue and from another Rite Aid in Arlington. Surveillance video shows them walking into the Rite Aid at Factoria Mall in Bellevue on September 27th just before 9pm. All three suspects head to the pharmacy where one of them points a handgun at the employees. You can see one of the pharmacists with his hands up before he is ordered to get down on his knees while another suspect steals the drugs. "There were a total of two employees in the back,” says Bellevue Police Ofc. Seth Tyler. “The second employee, which was a female, actually got pushed to the ground and kicked while they were committing this crime and then the suspects took off with some cough syrup with codeine that they use it to make an alcoholic beverage called ‘Purple Drink.’

Detectives think the robbers could be behind at least 10 pharmacy heists spanning from Olympia to Bellingham, but mostly targeting the Puget Sound area Rite Aid is offering a $15,000 reward for information that convicts these guys. Ret. Det. Myrle Carner with Crime Stoppers of Puget Sound explains the reward process. “If you want to call Crime Stoppers we're going to pay you up to $1,000 for information that leads to an arrest, it doesn't have to be a conviction. Rite Aid has also offered a $15,000 cash reward for an arrest and conviction. That means once they're arrested and they go to trial they have to wait until a court hands down a sentence and then the reward kicks-in. It’s just the opposite with Crime Stoppers. We'll pay you up to $1,000 if you give us the information and it leads to their arrest." If you know the names of any of these serial armed robbery suspects, call an anonymous tip into: CRIME STOPPERS: 1-800-222-TIPS You must call the Crime Stoppers hotline with your tip to be eligible to receive a cash reward for information leading to a fugitive’s arrest. CLICK HERE for information on how to TEXT A TIP to Crime Stoppers