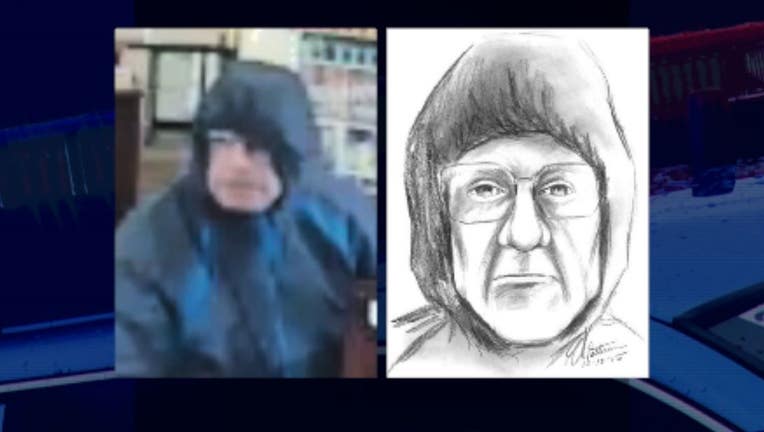 WANTED IN PORT ANGELES -- A terrifying, takeover-style bank robbery in Port Angeles is recorded on camera -- as well as the armed suspect's voice from a 911 call that detectives really need you to listen to closely -- as he threatens to shoot people, even referring to the deranged gunman who killed nine people at an Oregon community college in October. The threatening words you hear on the 911 call say, “If I come back and (inaudible), it's a ‘Roseburg Special.’ Open it up girl." The heist happened at the Umpqua Bank in Port Angeles on October 6th -- just days after the Umpqua Community College shooting in Roseburg, Oregon -- hence the ‘Roseburg Special’ mention when he threatens the teller. The video is shocking: He walks in, holding a gun and orders everyone in the bank to get down. You see a banker sitting at his desk in the back quickly follow orders. A customer turns around in fright and does the same, the teller helping him follows suit. The robber then points the gun at another teller and walks off-camera to her till to take cash. Then, about 30 seconds later, the teller starts taking stacks of cash out of his till and piling them up on the desk -- all while still staying down as he was ordered. Once the suspect grabs the cash from the other till he comes over, collects every single bill he can and then watch his body language as he's yelling more threats at the teller who then starts putting all the change from the till on the desk. The bank robber's reign of terror is finally done though, as he takes off without grabbing the coins.

Along with listening to his voice, detectives want you to take a good look at the police sketch of the suspect. Detectives think he's white, in his late 50`s to early/mid 60`s, around 5’9”, with a thin build. if you recognize his voice or his face, call an anonymous tip into: CRIME STOPPERS: 1-800-222-TIPS You must call the Crime Stoppers hotline with your tip to be eligible to receive a cash reward for information leading to a fugitive’s arrest. CLICK HERE for information on how to TEXT A TIP to Crime Stoppers