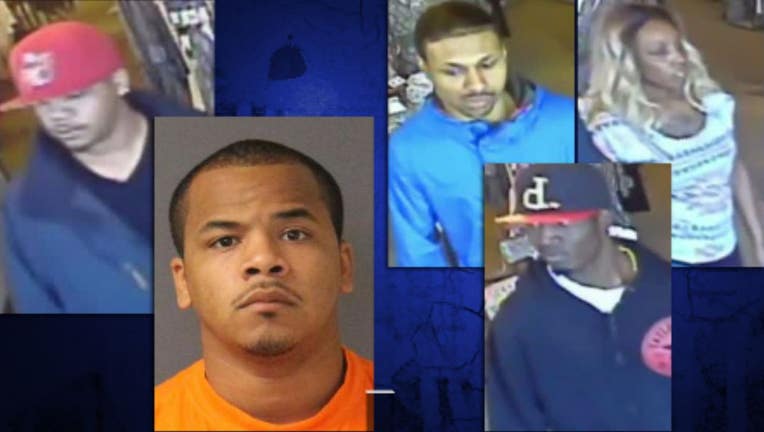 WANTED IN TACOMA -- Police say a surveillance video shows a crime ring that for several months has been hitting South Sound stores and stealing from employees. Gail Caldwell owns a business across the street from a clothing store that was robbed. She said the same group of people came into her story that day. "Oh, I'm extremely lucky nothing got taken," Caldwell said Tuesday. "The girl had picked up a few things, but put them down. My worry is they’re after wallets and iPads and getting in the cash register." Police say that’s  exactly what the crooks appear to be after -- personal items that are left unattended by employees. In the surveillance video, the man in the red hat reaches behind a counter and grabs a wallet.

"Women will think their purse is secure when they put it on the floor behind the counter, but when someone walks in and walks by, they can see the purse on the floor," said the Tacoma Police Department's public information officer, Loretta Cool. Police said they believe the group is responsible for similar thefts in other parts of Tacoma and Gig Harbor. They seem to be targeting businesses where only one person is working. "We just have to be more cautious because we're female," Caldwell said. "We're an easy target and it's just not right." The business owners are working with police and coming up with ideas on how to keep each other informed on who's coming into their stores. "One of the ways was to get an air horn and blow it when they start to come in," Caldwell said. "We've always encouraged phone trees," Cool said. "We've always encouraged people to talk about things that have happened to them so it doesn't continue to happen." Police have identified a man, Reymond Michael Lozano, as a person of interest in the case. And they're hoping someone can help identify the other people who may be involved in the crime ring. Until they're caught, Caldwell said, she and her fellow business owners will be looking out for each other. "We really have to come together and put our foot down and say you’re not going to intimidate us as women, we are going to be strong," Caldwell said.