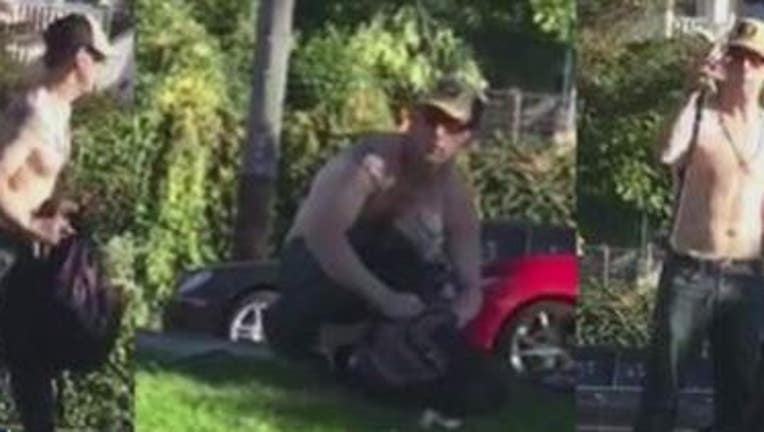 WANTED IN SEATTLE - Seattle Police are asking for the public’s help to identify the suspect who beat a Canada goose with a cane and then ripped it's head off.

The Humane Society of the United States and Crime Stoppers of Puget Sound will pay you a cash reward of up to $6,000.

“This goose was brutally beaten and beheaded at a public park in the middle of the day, by an individual demonstrating a stunning and callous indifference to life,” said Dan Paul, the HSUS’ Washington senior state director. “We hope our reward helps find the person who committed this cruel and despicable act.”

Police say the suspect was wearing a hat that said 'Hecho in Mexico' on it. He also has a tribal looking tattoo on his right shoulder and back.

Witnesses who called 911 say he threatened them.

The incident happened at Green Lake Park in Seattle on September 28th in front of multiple people. “Even though we’re in COVID, there are still people around and they’re watching this take place and they’re like, 'this is despicable. How could this guy be doing this?'" said Ret. Det. Myrle Carner with Crime Stoppers of Puget Sound.

First Degree Animal Cruelty is a Class C felony punishable by five years in prison, a $10,000 fine, or both.

“This was a violent and disturbing attack on an innocent animal. We will thoroughly investigate this incident and need the public’s help to identify the person who did this, so we can help ensure it doesn’t happen again,” said Seattle Animal Shelter Director Ann Graves.

If you know the suspect’s name, submit it to Crime Stoppers right now by calling 1-800-222-TIPS(8477), or text the information through the P3 Tips app on your cell phone. You can download the app for free. It also allows you to send photos of the suspect right to detectives. It's anonymous and you will be paid up to $6,000 cash if your tip leads to his arrest.