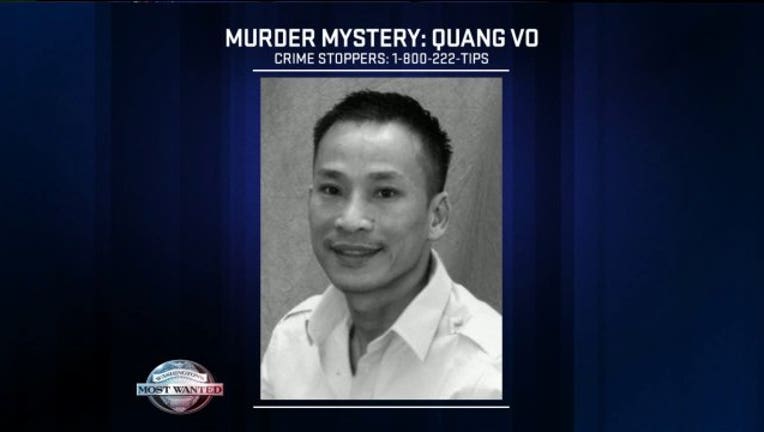 SEATTLE -- On Monday, Feb. 4, Quang Vo was gunned down shortly after 5:30 p.m. on South Columbia Way, marking the city’s first homicide in 2013. Vo’s younger brother is now speaking out. "He was a really good guy, he was really family oriented,” Vo’s brother, Tony Nguyen said. Nguyen said his brother always took care of their aging parents and said Vo tried to set the right example for him. "He made sure that I stayed in school and tried to help me set up my life so I'd be a better person". Seattle police said Vo was talking with someone he may have known outside his home on South Columbian Way when he was shot. "This guy died for what reason? We don't even know," retired detective Myrle Carner of Crime Stoppers of Puget Sound. Detectives said the gunman ran toward a waiting vehicle, but then changed direction and fled eastbound on foot and the vehicle sped away westbound without him. "Last thing we knew, it was either a black or dark sedan that was racing from the scene with the suspect in it," Carner said. Seattle police are hoping somebody saw the car racing from the scene or the suspect running and can give them some leads. “You know in a case like this a lot of you that are watching this are saying,' I know something, but I really don’t want to call the cops.' Well, that’s why we have the anonymous tip line -- 24/7 you can call the 1-800 number. Somebody will talk to you and take that information. It’s really important because the detectives are counting on your information so anonymous tips can really solve this homicide," Carner said. Nguyen isn't sure what he would say to the killer, but wants him to know how much his family is hurting -- especially his mother. "I wish they could just see all the pain and all the suffering that my family's been through and just ask them why they did that," Nguyen said. If you know anything about the suspect who killed Quang Vo Feb. 4 in Seattle, call Crime Stoppers at 800-222-TIPS. You don't have to give your name – the call will remain anonymous -- but you can give Vo’s brother and loved ones some justice. You can text a tip here.