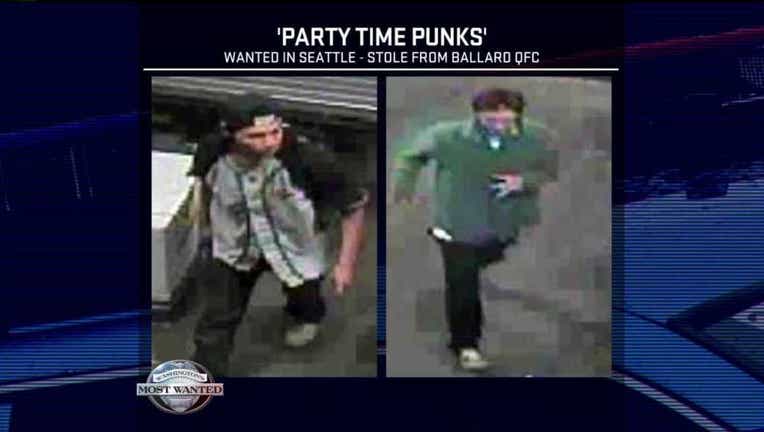 WANTED IN SEATTLE -- Caught on camera -- a couple of young thieves who could throw quite a party with all the chips and beer they ripped-off from the QFC grocery store in Seattle’s Ballard neighborhood. Ret. Det. Myrle Carner with Crime Stoppers of Puget Sound gives us a play-by-play of their elaborate heist. “As you watch this video, you're going to see two suspects breaking into a grocery store warehouse, and the way they do this, they take a wooden pallet, pry open the shipping door, put the pallet underneath, and then they're able to slide through. You’re going to see two suspects: One in a black and white coat and has a backpack, and the other one has a green coat. The guy with the backpack is who I would call the leader of this thing. He's taking chips and beer and he's loading them off of pallets that are inside the receiving area, then they're putting them on a cart. Then he's taking the cart out to the 2nd suspect, the guy in the green coat. The guy in the green coat's running back and forth, you'll see in the video, loading supplies. They get so much stuff, they have to go to a second cart, and they load that up, and then in a little bit you're going to see them pushing the cart back out to the door where they pry it open. They push the stuff underneath. They slide it under. Door shuts. End of burglary.” Detectives think they’re both young. One of them is possibly named “Jarrod.” If you recognize either of ‘Party Time Punks’, call an anonymous tip into: CRIME STOPPERS: 1-800-222-TIPS You must call the Crime Stoppers hotline with your tip to be eligible to receive a cash reward for information leading to a fugitive’s arrest. CLICK HERE for information on how to TEXT A TIP to Crime Stoppers